And now we've reached the portion of the program where we delight you with things perfect and beautiful! Toki Tori 2 is a new metroidvania-style puzzle platform game from Two Tribes. It's a long-awaited follow up to the original Toki Tori released on Game Boy Color back in 2001. Featuring improved puzzles, longer levels, more varied gameplay, much better graphics and many, many other additions, the minute you fire up this game you'll realize it was worth the wait! 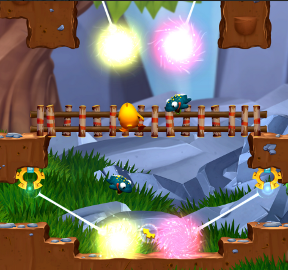 In Toki Tori 2 you play the cutest of all birdlings in the world. This bird has a few abilities at its disposal, the simplest of which allow it to walk, climb ladders, hover down gaps, and hop up small ledges. The more creative abilities include whistling and ground pounding, two commands you'll use to influence the creatures of this too-cute world. You'll get your first taste of this when you encounter crabs in boxes. Whistle a tune and the crab shuffles towards you, moving its convenient platform-crate along with it. Pound the ground and the crustacea runs away. Building from that simple foundation, Toki Tori 2 goes on to introduce new elements like bubble-burping frogs, birds that carry you around the stage, light-emitting critters who will illuminate dark caverns, and so much more.

As you progress through Toki Tori 2's overworld map, you'll slowly encounter more of the black fog/goo that's plaguing the land. Not a good thing, we think, but you'll certainly get to the bottom of that if you keep playing! The story is told without a stitch of text, and you'll be pleased to see every single puzzle element is explained without tutorials. The result is an absolutely seamless and immersive story that just keeps flowing from beginning to end. 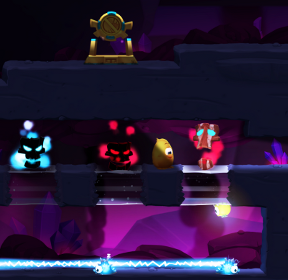 Analysis: It's obvious the folks at Two Tribes poured their hearts and souls into Toki Tori 2's creation. The level design shines from beginning to end, never drifting into dull copy/paste territory. You can wander freely in most stages without fear of artificial barriers or penalties for straying off the path. Just explore, see what you can see, and don't be afraid to give a little whistle if you get stuck. Or, you know, break out one of your melodies to activate a special power or two. Shhh, we didn't spoil that!

Technically, the PC/Mac release of Toki Tori 2 is titled Toki Tori 2+. The plus is to differentiate it from the slightly earlier Wii U release. Two Tribes listened to player feedback and made a ton of tweaks and changes to this version. The biggest improvement is the addition of a level editor and Steam Workshop integration, making it so simple to create and share Toki Tori levels with the world. Read more about the changes on the Toki Tori blog.

We really can't say all the wonderful things we think about Toki Tori 2. It's not the sort of game that will blow your mind with any particular element or design choice. It's the sort of game that's built well from top to bottom, allowing you to experience the sheer delight of puzzle platform exploration without any of the drawbacks. It's an understated game, for sure, but it's design is flawless and it will effortlessly keep you interested in playing for hours on end!

This game is amazing in so many ways! The fact that there is no text or tutorials, coupled with the open-world approach, makes for the most immersive experience I've seen in quite a while. Figuring out how to interact with the environment by yourself is just grin-inducingly fun. The puzzles themselves are also really clever, especially the ones in the tougher paths.

So, shout out to the developers for the outstanding game-designmanship! (I don't think that's even a word, but you guys earned it!)