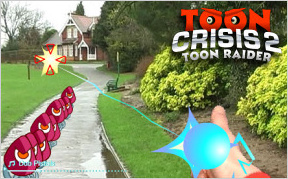 Shooter fans and lovers of really odd games listen up: Toon Crisis 2: Toon Raider has been released. The rather strange online flash game combines photographs of real locations in the UK with cartoon enemies leaping out of bushes to attack you, all in the traditional click and shoot style. If you think that's weird, check out the weapon: your right hand with thumb and forefinger extended. All of this takes place while a diverse soundtrack of popular music dances in your ears.

The sequel is just like the original Toon Crisis but with new locations, enemies and bosses. Once again it's an advergame for a Sony product, but don't let that keep you from playing. The variety of enemies, difficulty level and sheer hilarity of the concept make it well worth your fifteen minutes.

Read our review on the original Toon Crisis game for more info, and check out Nobuyuki Forces 3 for a very similar type of action game.

Even better than the last game. Some parts were seriously frantic, particularly the second to last one.

I was struggling a bit in the final fight, before getting some green ammo and the 'double gun' powerup. That

got 0wned. (Yes, that was supposed to be ironic).

JohnB, you stole my game!

Serves me right for not checking in more often than once every hardly never.

Great game, agreed, I liked it better than the first one.

It's a neat game - too bad it doesn't play well for lefties.

What do I mean? If you're a righty, try to play this game, controlling the mouse with your left hand...

Thanks, but I think I gonna stick with puzzles. ;-)