Sandlot's swashbuckling strategic sea-faring sales simulation can now go wherever you go on your iOS, NOOK, or Kindle Fire! Tradewinds 2, one of the earlier chapters in the much beloved series, has you unfurl your sails for adventure, fame, and most importantly, coin. You begin as a fresh-faced would-be captain of your choosing with a tiny crew and a tinier ship, with only a handful of currency (and some debt) to your name, but if you play your cards wisely and take a chance on adventure or two, you might just find that one day your name is sung from one end of the ocean to the other. Provided, of course, you don't fall for the ol' candy-gram trick. 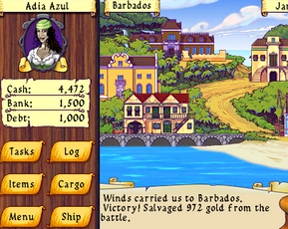 There are two main things you need to concern yourself with; money, and your ship. Cash is used for everything from repairs to buying cargo and upgrades, including new vessels, but you can't very well get any if you have no ship to carry you around in. While you start out with a lowly sloop, which even sounds depressing, as time passes you'll gain access to bigger and better ships with more power and flash. They're expensive, of course, so if you want to afford them you have a few options. You can either visit the markets in each port, buying various items like fish or spices, and try to sell them somewhere else at a profit, or you can take on tasks for the governors of each city to earn rewards. Typically, these tasks either involve fetching something or shooting something

Tradewinds 2 consists of a series of screens, each representing a different area, with buildings in cities that you can tap on to visit the different establishments. On the world map, you can tap a location's name to sail there, and should you encounter scallywags or scoundrels along the way, you'll automatically enter into combat. During battle, all you have to do is tap an enemy ship (helpfully adorned with Bad Guy(tm) black sails) to direct your fire and then sit back and keep an eye on things. You can buy more cannons to deal more damage (or replace ones that get destroyed), and special one-use weapons like firebombs and chains can be purchased at the shipwright and deployed at the tap of an icon to help take the edge off of a hard fight. Your ship's health is represented by the green bar at the side of the screen, and if it gets too low you may want to hit "flee" to hightail it out of there. You know what they say; he who fights and runs away gets ridiculed mercilessly the next time he visits a tavern, but one day will have enough to buy it and throw everyone else out on their stupid, mocking faces. (Was that Ghandi? It feels like it was Ghandi.) 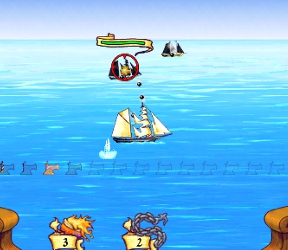 Analysis: As an entry point to the series for newcomers, Tradewinds 2 more than does its job. While it has a lighter touch with humour compared to the nonstop gags of, say, Odyssey, and also isn't quite as hero-centric in terms of its plot, it's a well-written, occasionally funny casual adventure with lots of oddball characters that's perfect to pick up and sail around with whenever you have the time. The visual style is simple but colourful, and navigation on the touch screen is easy and natural. Things do get a little muddy on bigger screens like the iPad, but it looks great on smaller devices and keeps the buttons big enough that those of us with sausage fingers won't have too many mis-taps. Of course, if you're like me and roughly as sharp-eyed as your average Zubat, you might also be willing to deal with a little muddy texturing on the iPad if it means blowing up the resolution makes that tiny font easier to read.

Combat, unfortunately, is still pretty boring. Sitting back and watching tiny ships pew-pew-pew cannon balls at each other, with your only interaction deploying any special bombs or weapons you may have bought, can become a drag quickly. It makes you wish for a fast-forward button you could hold down to speed through encounters so you could get back to the rest of the game. Tradewinds 2 isn't dauntingly deep or difficult, however, and if what you want is something that's easy to pick up and get lost in whenever you have a spare moment to kill, this is definitely a good choice. Weird, funny, casual, and surprisingly engrossing, Tradewinds 2 might not be complex enough for some simulation fans, but it is a great title to cut your teeth on, or even just dive into if you feel like your repertoire of saucy pirate names isn't quite big enough.

NOTE: This game was played and reviewed on a First Generation iPad. Game was available in the North American market at the time of publication, but may not be available in other territories. Please see individual app market pages for purchasing info.

4,195 Views
0 Comments
chrpa— Jayisgames needs your help to continue providing quality content. Click for details Welcome to the Roundup 44 with three games! As mentioned in the previous roundups, only odd-numbered episodes are featured since even-numbered are for Robin Vencel's patrons. More...  ...

Cursed Travels: Below the Factory

4,549 Views
1 Comment
chrpa— Jayisgames needs your help to continue providing quality content. Click for details After investigator Roberts and his companion Atzalar together with professor Fargleton successfully got rid of an ancient fearsome demon, Farold Roberts with Atzalar go to the abandoned factory...  ...

3,415 Views
0 Comments
jayisgames.com— Who doesn't enjoy gaming? Especially online gaming. It is a great way to unwind after a long day and transport yourself to a different world. There is a wide variety of games you could enjoy but irrespective of what kind...  ...