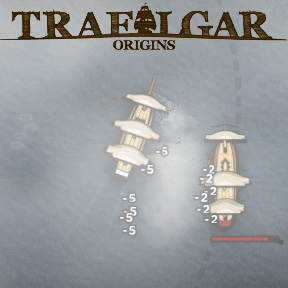 If there's one thing I associate with being a kid, it's piracy. Not the software kind (although, judging by my little brother, that's changing) but the tales of the rapscallions who sailed the Spanish main, armed with letters of marque and blasting ships to smithereens if it looked like they had even a gold earring. The salty wind on your face, the rolling ocean, the three-headed monkeys... it was a good time to be a seaman.

Trafalgar Origins, from Preloaded, is a top-down naval combat game commissioned by Channel 4, created to promote their upcoming television show. It plays similarly to Sid Meier's Pirates: use the up arrow to raise anchor, down arrow to lower anchor, left and right to steer, and [Z] or [X] to shoot port or starboard cannons. Use [space] to switch between ammo types. You create a ship's captain, name him and choose how he looks, and then you're given a ship to sail around and shoot other ships. There's some customization involved, as after every mission you earn experience points and gold coins, and you're able to spend them on upgrading your ship's crew. An interesting aspect is that while you can hire different crew members to fill different functions on the ship, they'll also take a salary from your end-of-mission earnings. You're left to decide whether to run the ship with a skeleton crew and take all the lucre or be nice, share, and lay waste to your enemies.

There are a lot of enemies in this game. There are both single player and multiplayer game modes, and each has 3 different types of gameplay. In the single player, there's Arcade, Historical, and Tutorial missions, which are oriented towards recreating historical battles, teaching you how to play, and just shooting stuff and defending targets for fun. In the multiplayer, there's Vulture, which asks you to hunt down a specific ship and loot it for a reward, Survivor, which sets you against other places in a bid to live out the time limit, and Contract Killer, which is basically Deathmatch: Naval Edition. All of these modes are fairly hefty in their content, and will keep you playing for hours. Oh yeah, and if you're a diehard completionist, there's an achievement system as well. 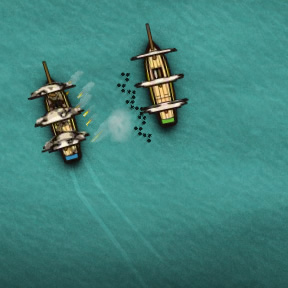 Analysis: Trafalgar Origins is a very well-made and polished game. While somewhat simple, its graphics are well-designed, and I was never in doubt about what I was looking at and whether I needed to shoot at it. Despite some naysayers in the game's comments over on Kongregate, I never had any trouble handling the ship, as the wind physics are well-implemented and predictable. However, I was surprised by the lack of options when it came to acceleration — either you've dropped anchor, or you're traveling with full sails. I got used to it, but it seems like a glaring omission in an otherwise well-produced game.

The combat is both fun and challenging, as I found out when I spent the better part of an hour on a Historical mission. If you know what you're doing and the rudiments of sailing, this game can still get difficult. It's a different story in multiplayer, as I ran into a lot of lag and rubber-banding, which made it hard to get a decent volley off. When it worked, though, it was a lot of fun.

Overall, Trafalgar is an entertaining and educational peek at the age of sail, and one that will take you many hours to beat with quite a bit of replay potential.

Note: If you wish to login and play using Facebook Connect, you will have to play the game over at Channel 4

this game is awsome, I've been playing it all week on kongregate, could use a better game save system or some kong badges

I was cool with this game until virtually every mission in Arcade says "Do a thing! Avoid the Other Thing!"

And then they set up the wind to make it completely impossible to avoid death and reach objectives. Nice. Why am I playing this again?

Seems like a waste of well-put-together game, to set up the missions so badly like that. "Just sail directly into that hurricane, son! That's all you have to do!" Riiiiiight.

If you're going to make it a "challenge" by putting mines right where the wind & currents want you to go, it should at least be POSSIBLE to navigate to the given checkpoint without sailing into the mines. Is it? No, it seems it is not.

The mission defending three ships in the middle from six attacking ships is pretty ridiculous. Any tips?

Anyone else unable to start a mission? I just get the pocketwatch spinning forever.

Unable to play the game, problems seem to be with the game not registering keyboard presses - couldn't type a name in, had to copy & paste, and then WASD keys didn't work.

It also seems to not work on Firefox, although it still has the aforementioned problems on Safari.

Anyone else having similar problems?

Yeah, the mission to defend three anchored ships against six attackers is ridiculous. This kind of logarithmic jump in difficulty turns me off to the game. Especially when your speed choices are between "breakneck" and "anchored".

The only thing I can figure on that mission is to just dump all the mines you can while slowly circling the friendly ships.

It takes a bit of trial and error, but loose your ready round shot off your right side as soon as you start. Switch to grape shot. You can generally manage a quick kill by ramming into an enemy ship, which deals damage, then loosing a full broadside of grapeshot into an opponent. You'll also grab the capture bonus in this. Knock one ship out quickly like this. Use the wind to move around and gather ramming speed, and don't be afraid to defend your ships by getting between them and the cannonballs.

It takes practice, and quite a few tries. The speed thing, I found, wasn't that big a deal. It simplified movement so I could focus on things like turning, the wind, cannons, cannonballs and so on.

I haven't actually started yet, but... Has anyone else been able to use Facebook Connect with the game? The popup to authorize it didn't even show up until I opened the game on the original site (http://www.channel4.com/play-win/trafalgar-origins/), and even then, after I clicked "Authorize", the window closed, but the app didn't seem to recognize it.

The arcade mission entitled "Man Down!" crashes my browser on the loading screen, while running away with any memory it can get its hands on. Without fail.