So you're an alien. Well, not just one alien. You're three aliens. In a temple. Filled with robots. Let's start over. Flashrush Games' latest title, Transmorpher 3, is an action platform game with just a bit of puzzle smattered on top. You're a green cycloptic blob of adorably moldable alien with a penchant for absorbing the locals and transforming (sorry, transMORPHING) into them at will. Move with the [arrow] or [WASD] keys and press the ]1], [2], or [3] keys to turn into two other shapes: that of a round blue orb that can roll and stick to walls, and a big orange bruiser-type who can't jump but can break through barriers and push blocks. Together the three of you (er, one of you?) must travel into the depths of this inexplicably tech-savvy ancient temple, dodging lasers and robot guards and solving door puzzles along the way. It makes sense when you're doing it. Trust us. 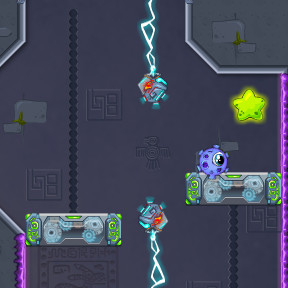 Transmorphers 3 is pretty kid-friendly, and not just because of the bright, goofy graphics. The game's a bit on the easy side, especially for the first half or so, with relatively little danger and puzzles that are a bit too explainy. It picks up later on, however, and switching between the different play styles of the alien forms is an awful lot of fun. Though they are easy enough to avoid at first, the game keeps throwing new ideas at you consistently. There are holes you have to hide in so battle droids can pass you by. There are laser beams you have to dodge and switches you have to activate. And the game requires some more rapid-fire transformations (transmorphations?) later on as you have to jump, wall-climb and break blocks in rapid succession. It's nothing groundbreaking but it's all extremely well done. Flashrush specializes in solid, no-frills games and that's exactly what Transmorpher 3 is. So check it out and get transmorphing.

Well, by level 13, the difficulty has ramped up QUITE a bit. I like the graphics and the mechanics work well. Smashing stuff above you requires a little bit of timing.

i just luv lil platformers like this :)
graphics are bright and lively and the gameplay is tight...
thanks, jay :)