The Treasures of Montezuma 2

It seems like they are piling everything into match-3 games these days. Lots of backstories, killer graphics, mini-games and hidden object scenes. But what's a person to do if they just want some match-3 goodness? Check out The Treasures of Montezuma 2 by Alawar Games, a puzzle game that bends the rules just enough to provide an awesome bit of fun. 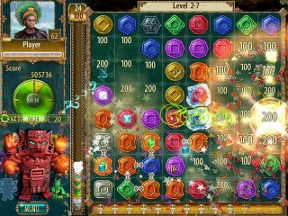 No intro story to deal with, no pages of text to read, just pick your character (male or female) and start playing! Adventure mode consists of five levels, each with eight match-3 games followed by a brief hidden object scene at the end. Most of the time you're simply swapping tiles to make matches of three or more, but a battery of power-ups makes things much more interesting.

Earning gems is the overarching goal of the game, but you'll also be racing against the clock to make matches over every part of the grid as fast as you can. The quicker you work, the more money you'll earn. As tiles break they fall as sand into a meter below the board, which is slowly draining down to nothing. Fill the meter to the top and you trigger a bonus scoring mode for a few seconds that nets you double points for the duration.

Idols are the most interesting feature of the game. Make a match of, say, orange tiles and the orange idol leaps forward. Make a second match of orange tiles immediately after and the orange idol bonus triggers, an effect that can range from clearing tiles on the board to adding bonus time to the level. Between each round you can visit the shop to purchase upgrades as well as these nifty idols, each of which adds another optional (but cool) layer to the gameplay. 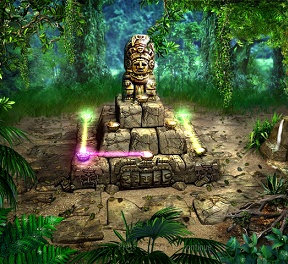 Analysis: Although the extra stuff in games such as Grandpa's Candy Factory are nice for match-3 novices, for those experienced players who just want to smash tiles, The Treasures of Montezuma 2 is the way to go. There's a ton of gameplay here, and it's all so well-balanced, organized and engaging, you can't help but fall for it.

Once you complete adventure mode, you'll unlock some goodies that offer even more challenge. For starters, hard and expert difficulty levels can be switched on to make the adventure a lot more challenging. Puzzle mode also shows its face with sets of tiles you'll need to meddle with to make vanish, and the ever-popular Endless mode supplies exactly what it suggests. You can even go back and replay levels, attempting to complete everything within the best time limit and earn trophies for accomplishing various feats. This adds up to hours upon hours of casual gameplay!

The Treasures of Montezuma 2 promises something very simple: a fun match-3 puzzle game with a handful of helpful power-ups to give your gem swapping a little oomph. The visuals are flat-out gorgeous, the South American-flavored flute music is lovely, and gem swapping is smooth and fluid, allowing you to work on matching other tiles while chain reactions are still going on. It's everything you could want in a straightforward matching puzzle game, all without an annoyance in sight.

This is the third game in the series which also includes The Curse of Montezuma, also known as Jungle Quest.

Just wondering if you can save your level or does it start from the beginning each time..... this is all new to me but I am enjoying the game but each time i quit it starts back at the beginning which is annoying..... thanks

treasures of montzuma it not smooth, it has a delay every time it trys to drop, I have been trying for a month to clear 3-5 and it is impossible with this delay as every second counts with the time limit. started fun and became very annoying. I uninstalled the game for good