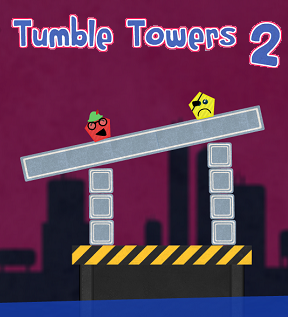 Quick! You gotta help! No time to explain! There are some pernicious polygons precariously perched atop those blocks, and we need you to keep them unharmed! How'd they get up there, and why are there so many trampolines and boxes of explosive scattered about? Like we said, there's no time to explain. Look, just roll with it, man. It's fun. Tumble Towers 2 is a physics puzzler by Team Omni, where solid ground is the only thing that's remotely stable.

Basic gameplay is as thus: clicking on each and every blue blocks to remove them, use physics to eliminate the required number of blocks from the play field while keeping the totems unharmed. Other elements are introduced over time. Things like purple blocks that need to be touching to be destroyed, deadly-to-the-totem-touch red blocks, explosive TNT blocks, and bouncy green jelly blocks. There four modes: Classic, Water (where you must dunk a designated totem into the water), Connect (where you must hook up a male and female totem), and Hybrid (which features elements from the other three modes combined). Tumble Towers 2 doesn't really try to hide the elements it copies from the popular Totem Destroyer games. Even if it's a bit of a clone, though, it's certainly one made with a lot of love for the concept. With sixty colorful levels, a level editor, and a large selection of community levels, it should keep players happily tumbling and dropping for quite some time.

It's probably due to the speed of my machine, but some of the levels require precise timing when clicking on the TNT boxes and I'm getting a delay. So, once I've got the timing down, I also have to figure in the delay which makes it a bit frustrating. Cute graphics though, and enjoyable music.