Sometimes in life with your significant other there's a need to go on a relaxing getaway with them. And these adorable dots chose to do just that. They travel through the deepest ocean, scale a highest mountain, cross the fiery landscape, and generally go to places that really wouldn't seem relaxing to most of us. But if the way to travel around was to connect dots of matching colors, well the simple answer would be, "When do we leave?" Two Dots, by Two Dots Inc, is a free mobile puzzle game about connecting; connecting the dots, connecting our two heroes closer together, and connecting you to one of the most charming, addictive games for iOS and Android we've seen in a long while. If the thrilling challenge of the levels isn't enough to win you over then the whimsical artwork and the snazzy music will. And fear not, this matching game of color is also friendly to the colorblind. 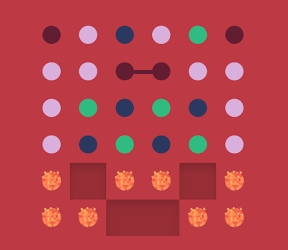 While connecting dots doesn't sound all that difficult, Two Dots knows how to make things challenging. Every level you have a certain number of colors to "collect" and you can only do so by drawing a line between them, as long as that line isn't diagonal. If you're able to make a complete square of four or more then all the colors on the screen get popped. But besides the colors to match, each new area brings in a new type of dot... anchors to be dropped to the bottom, ice blocks to be cracked, fire that will burn a dot next to it, and that's just the start of it. This simple idea of a game will have you thinking, planning, and pleading to the luck gods as you try to master all the levels. Sadly, this game is going to attempt to get you to buy goodies from it after each loss. They'll let you have a free package at first, but after that they politely cough and hold out their hand while trying not to be intrusive. But that is the way now with mobile games and their micro-transactions. While it would make the game easier, you can still get by without handing over real cash. The only other annoyance this game has is occasionally in the beginning they will gently prod you into connecting up with Facebook or Google+. This, however, can be declined. It's not every time you open the game, but it's enough to draw a small sigh from your lips, but the game itself will make up for it. Every level you lose costs you a heart, of which you only have five, but a timer will slowly refill them. This you'll find beneficial because if there was nothing to stop you from endlessly continuing, your family and friends would have to get used to talking to you with a screen in front of your face.

It should be noted that TwoDots is the sequel to Dots, the ultra-minimal iOS game from PlayDots, Inc. (The official name of the company).

TwoDots came out several months ago, and I've been enjoying it a lot, though the mentioned freemium aspects are the only setbacks to an otherwise excellent game. If you can tolerate the 15 minute wait period per life slot refill, you don't have to pay extra.

I've played through nearly all the released worlds (the Caverns world was released today!) and each world brings new challenges that keep the fun and enjoyment of the game intact. While I've found several levels remain unbalanced, in that I find it's impossible to gain three stars on a few levels, many of them have been fixed with version updates. In all, TwoDots is a great game that is certainly worth the lost time, if not cash.

If the creators are reading this: I wouldn't mind an "Endless" mode of the game as in the original Dots, with the new elements TwoDots introduced like the ice blocks and anchors.