Valerie Porter and the
Scarlet Scandal

There was this dame named Valerie, see, a dame with a sharp mind and great gams. This dame, she had ambitions, she wanted to be a reporter. All she needed was some juicy dirt and a good lead. Oh, and a job at a newspaper. And a boss that didn't just send her out to pick up his lunch. Welcome to Valerie Porter and the Scarlet Scandal, a hidden object/adventure hybrid set in the roaring 20s. Designed by Game Brains, it's a tale of greed, lust, and power as seen through the eyes of novice reporter Valerie Porter. Everything begins with a rather gruesome murder of a starlet in a dingy alley next to a gin joint. Valerie arrives at the scene and wonders if a story she broke for the Daily Informer could have caused the tragedy. 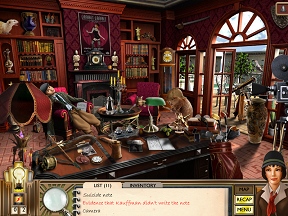 There are 11 chapters and a prologue to this messy tale, each chapter containing multiple HOG scenes interspersed with a variety of mini-games. Navigate from place to place using a subway map while attempting to accumulate clues. There's lots of cut scenes and dialogue which can be skipped, but it's not advisable, as many of the mini-games depend on your recall of events that transpired during the chapter. Although there are no timers in the scenes (except for the 60 second subway challenges), you gain more points for finishing quickly and creating as many "chains" as possible.

Many hidden object scenes contain puzzles to solve as well as a fun dynamic: combos. In any HOG scene, if there is more than one item, say ten pieces of a letter or 17 dolls, you can click and drag from one to another to pick them up simultaneously in a "chain", which nets extra bonus points. Each HOG scene also includes five bells, a sort of extra scavenger hunt. Areas that need to be examined more closely or that can be manipulated will cause a blue question mark to appear above the cursor. Hints are on a refilling timer which can refill even faster with batteries, which the player can find in every HOG scene. Clicking on the name of an item in the list to be found will bring up a helpful silhouette of the object to aid in its recovery.

List items themselves are not always straightforward. Some lists contain actual item names, some lists merely contain clues, and some contain riddles. Find "an object for luck", or find "five flies that aren't flies" to add to the HOG fun. Although most dialogue passages are simple cut-scenes, there are areas where you will have to choose the correct question to get a suspect spilling their guts. 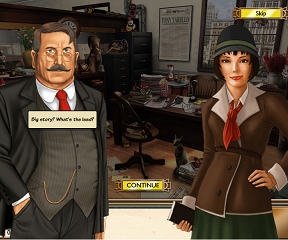 Adding to the challenge of some of the HOG scenes are the "footsteps of doom". In some locations Valerie is certainly where she shouldn't be, and if you hear footsteps you must turn of the light in the room and continue searching by flashlight, upping the difficulty in some areas. What happens if you don't turn out the lights? Well, Valerie gets caught and you have to start the whole scene over again.

Many of the mini-games between scenes are either word searches, "fill in the words" challenges, or "create the headline" challenges, all of which rely on the memory of the player. In the word searches, you will be presented with lists of words to find that relate to a section of the chapter. However, only the first words in the lists will show, forcing you to remember details about both HOG scenes and dialogue. Other mini-games involve assembling equipment, creating developer for the darkroom (with all the labels from the chemical bottles conveniently missing), and manipulating a classic old-style black and white enlarger to print evidence photos. All of the games are rather familiar, but the difficulty climbs nicely as the story progresses.

Analysis: The artwork of Valerie Porter and the Scarlet Scandal is, for the most part, bright and photorealistic. HOG scenes are a bit cluttered but not terribly so. Not, perhaps, the most stunning or original artwork out there, but fun nevertheless as everything is done up in a fabulous art deco style, from the cursor to the menu and everything in-between. Clothing and locations also reflect the time period, as do the objects that you are finding. No anachronisms here! Period appropriate music and snappy dialogue (delivered with some fine voice acting) completes the illusion of being transported to a time when women were just joining the workforce, when organized crime owned most politicians, and when alcohol was illegal (but still widely consumed). 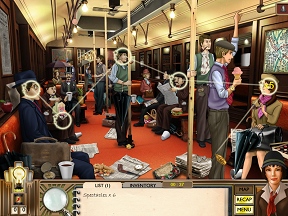 You can skip the dialogue sections, but you will find yourself at a disadvantage when you reach the end of a chapter and have to complete a "fill in the word" puzzle based on the chapter events. All of the mini-games are skippable, but that would lessen the enjoyment of the immersion. Valerie Porter and the Scarlet Scandal lends itself well to casual gameplay, each chapter being pretty self-contained.

There are a few problems, however. The game is not as long as it could have been. As with most HOG/adventure hybrids on the market you are looking at perhaps 2-3 hours of gameplay. The click area for picking up objects is very tight, which can get a little frustrating when you are trying to pick up objects quickly. A few of the character portrayals — while perhaps accurate to the time period (or at least, accurate to movies of the time period) — border on stereotypical and even perhaps mildly offensive. The subject matter itself, corruption, infidelity, greed, murder, and suicide make the game perhaps not the best choice for younger players. The memory mini-games are a fun change from the ordinary, but they are pretty simple, and could have used some beefing up. On the plus side, extra effort was exerted to make the game playable for both the hearing impaired and those who like to play with the sound off. Places where audio clues are vital also have visual cues so that nothing is missed.

Wander back to a time when men were guys and women were dolls, when gin joints and speakeasies were the happening places to be, and when an intrepid girl reporter could really make a difference.

Valerie Porter and the Scarlet Scandal is available to download from these affiliates:

Chapter 8: The Tramp and the Tease

Chapter 9: The Batton and the Bottle

Thanks to Kayleigh for writing up this awesome walkthrough \o/ :D!

Chapter 8: The Tramp and the Tease

Chapter 9: The Batton and the Bottle

Thanks to Kayleigh for writing up this awesome walkthrough \o/ :D!

Does JiG need to review every single hidden object game that comes out? This dead horse has been beaten so hard that the only possible explanation is that it's just a soulless revenue model now.

I guess that's just one anonymous internet guy's opinion, but all these filler games are clogging up what is otherwise an extraordinary website.

This looks nice. But I gotta ask: what is it with hidden object games? For me it is a boring, evolved version of what we play when we were kids.

Of course artwork is nice but I'd like to interact with everything, y'know?

No offense intended I was just curious since these things pop out like bunnies.

Thanks for the kind words. We work very hard at being extraordinary. But no, in fact, we most definitely do not review every hidden object game that comes out, there are other sites that do that. We just review the good ones.

There is a huge audience (ourselves included) that enjoys good hidden object games.

If a game isn't for you, then please just move along to the next one. Not every game will appeal to everybody. I don't like RPGs, but I certainly don't object to a good one being reviewed when one comes along.

@srsly & Aureza: maybe the problem is you two are just on the site way too often. heheh ;)

It does boggle my mind, though, that there's this class of artist who somehow paints tons of suuuper detailed pictures very quickly. Like some kind of Bob Ross of the video game industry. The difference being that his happy trees are hidden.

Where does he come from? How does he do it? Questions with no answers..

I liked this game. Somehow, it all felt right, the artwork, the story, minigames, the overall difficulty, even voice acting. It took me much longer then 3 hours, perhaps because I did enjoy playing it and was not skipping anything.

Only thing that annoyed me was the 1 missing bell and I did not know from which scene it was missing. Other then that, very good game.

The music in this game is almost identical to the one in Mystery Case Files Prime Suspects and Huntsville!