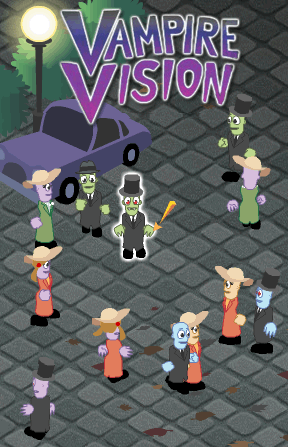 Is there a occupation cooler than Vampire Hunter? After seeing the exploits of Van Helsing, Buffy, Blade, Alucard and D, I'd be surprised if high-schoolers don't flock around the recruiting table at every annual career day. However, not all of us have time for the years of intensive training that is required to spot vampires on sight. After all, in this age of gothic fashions and Stephanie Myers novels, there are so many normal humans with pale skin, fangs and garlic-aversion... and society so frowns on staking first and asking questions later. Thankfully, the University of Washington's Center for Game Science has developed an online training program that will focus your Vampire Vision through a combination of arcade puzzling and hidden object spotting... and it just might improve your regular vision too.

Each round you are presented with a series of Tarot cards that inform you what attributes to look for. Perhaps the vampires will all have fangs. Perhaps they'll all have wings. Perhaps they will move around a lot. Whatever the description, click them with the mouse to stake them into a pile of dust. Your score is based on what percentages of humans get out alive. Watch out though: while you don't want to stake any innocents, vampires will gladly add another to their ranks when given a chance. Doing well unlocks various bonuses and power-ups and, as the "About" screen claims, develops visual perception skills.

Vampire Vision tests many parts of the brain: observation, reflexes, memory, and strategy to name a few. Its core concept wouldn't be out of place in a brain training regimen, and I mean that as a compliment. Combining an original concept with some cartoonishly spooky graphics and a twisted sense of humor, I don't know if Vampire Vision will bring you closer to 20/20, but you'll have fun finding out. There are a few negatives, most of which focus around how small the characters appear in your field of vision. Particularly, since the game lags the more people are on the screen, you'll want to lower the graphical quality. However, doing so may blur the very features you're looking for. Also, the mini-games throughout don't add much. The most prevalent involves identifying an off-center dot in a screen of many: it's the kind of thing most aren't going to be interested in unless they're being paid by someone doing research outside the dining hall. It's an unfortunate distraction because the vampire hunting itself is solid once you get into the mechanics. If you're looking for some enjoyable calisthenics of the senses, Vampire Vision is worth sinking your teeth into.

Holy cow, set this on a lower quality. Absolutely slayed my system memory and Flash is already a hog. There was no reason to animate the tutorial characters (other than to get a better grade, I guess), much less have them pop up in-game.

Also, putting obstacles in hunting games is awfully dirty, even if they're transparent when moused over. Fun game otherwise.

The game is by University of *Washington*, not Wisconsin.

This would be a great game to pass a dreary hour or so but it runs too clunky to play properly , even on low quality.... Not impressed at that, I would of so gotten into it :(

[Try a different browser, especially Chrome if you're not already using it. -Jay]

I really wanted to like this but I got frustrated at the size and lag so I just started killing humans for no reasons - well, better I survive uh?

I am enjoying it immensely, and having no problem with lag. The only levels I don't like are the ones where "humans never stop walking" - sometimes it gets boring just waiting around for someone in the mob to stop walking.

I think the "same/different" minigame is unique and interesting.

glad to hear i'm not the only person having issues. flash crashes literally every thirty seconds and my pc could max out just about any game on the market. i won't be installing that datamining botnet-infested failure of a browser chrome just to play a flash game. oh well, it seemed fun for the two minutes i got to play.

Oh, and something on the mini-games: "The most prevalent involves identifying an off-center dot in a screen of many..."
What? Every time I've gotten a minigame, it was whether the squares were the same or different...

1/5 for memory-hogging, even on lowest quality. It lags SO badly and keeps telling me I clicked on someone else!

Somehow Achievement and Upgrade menus disappeared on me - anyone getting same bug?

@wojbie- yes i am and it is so frustrating

The "vampires moves faster in the dark" is soooooo annoying and based on luck.

@wojbie, @annabanana- Same here. I initially thought it came with one of their recent updates, but when opened it on a different browser everything was fine... so there's something wrong with the saves.