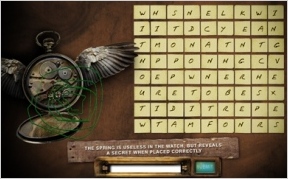 While I suspect that Vanishing Point is another one of Microsoft's elaborate "get people to like Vista" ad campaigns (much like their pathetic—albeit clever and absolutely hilarious—team-up with comedian Demetri Martin), I really have to hand it to them for making a superb puzzle game with depth and intricacy that is likely to astound even the most seasoned of puzzlers.

Teaming up with the fabulous 42 Entertainment, Microsoft has created a game that is one-half God Tower-esque puzzling, and one-half alternate reality game (ARG) goodness with obsession potential. Seriously, Microsoft's gone all-out on this one. They've even included some pretty outrageous prizes, which include, believe it or not, one grand prize trip to outer space.

Now, before I get started, just know that because of the game's ARG elements, Vanishing Point has a large dedicated fanbase and a plethora of puzzles that extend far beyond the scope of the flash portion of the game, far more than I could possibly cover in this one review. If you want to know more about the intimidating underwater portion of this iceberg, there's an entire wiki devoted to the game.

Before you begin you must register on the site, but it only takes a minute and it's worth it. Every week a group of twelve new puzzles will be released (four easy, four medium, and four hard) in the guise of a puzzle box. So far, two have been released, and two have yet to be released. You can play these puzzles in any order and get points each time you complete an individual puzzle. But here's the innovative kicker: to complete any flash-based puzzle, you'll (probably) need the corresponding ARG-based clue, each of which are released in real-time live events all over the globe. The first happened in Las Vegas, the second set of clues were written in the sky all over the world, and god only knows what else Microsoft's got up their sleeves for the next two events. If you're lucky enough to live near one of the countdown sites, I seriously suggest you try and visit these mind-blowing events.

Analysis: The flash puzzles are clever and of extremely high quality. Even without the incredible ARG-elements, this is one awesome puzzle game, and likely to be entertaining far after the event has ended. Conversely, even without the flash puzzles the ARG half of this game is still of unbelievable quality. Kudos to 42 Entertainment for putting out this piece of gold.

Great prizes, great fun, and it's free. They put a lot into this game, and you'll get a lot out of it as well.

Cheers to Deadzone and Pierce for submitting this one!

I foresee much discussion on this. I just watched the 01.08 movie and I know I'm in for a world of hurt.

first off, let me mention that the clips and puzzles seem to be accessible without registering. however, it seems that you do need to be logged in to submit any guesses for any puzzle. i'm choosing not to register, but this does sound like a fun puzzle, and i'll keep watching this one for a while.

second, it really seems like ARG's are becoming more mainstream. and by "mainstream", i mean REAL. i believe that there's some sort of ARG-esque puzzle coinciding with the american TV program "Lost", and this seems to add to the pot. from what i can tell, ARG's really do make for a great form of advertising, since it gets people directly involved with the product. (i know one of the box 2 puzzles takes you to an online microsoft mapping program.) the concept of ARG's in real life isn't a bad one (i mean, come on, who didn't play with a treasure map when they were a kid to find the hidden treasure, even if they hid it twenty minutes before), but something of this magnitude just strikes me as strange... microsoft, i really hope this pays off for you, because this is gonna be one costly game!

Impressive, Microsoft. A bit beyond me... but going all out on Vista. Now involved in the the release of the new operating system: A new version of Internet Explorer, a sleeker Windows Media Player, and a game which involves a projector, a creepy lady, a trip to space, skillin' puzzles, and a choreographed fountain. All of the new stuff is sleek so far... hope the operating system is two.

The main thing about ARGs that I found so fascinating is how far and complex into the real world that the game can get. And, checking out the Las Vegas video and sky-writing clues, I must say Microsoft is going all out for this one. I looked up the countdown sites and times, and hopefully I can make it for the Toronto clue this Saturday.

Anyway, the one problem I'm having is that I can never get the images and such fully into the window when I try to solve the puzzles. The login and intro pages are fine, but when I enter a puzzlebox game, the images never fully fit my screen. The window is maximized and everything, but the words and images go over the borders of the screen, and there's no scroll bar for me to read the rest of the puzzle. I think this is just a problem on my end, as this has happened to me on other sites before. Anyone know how I can fit all of the info into one window? Thanks!

Ahh I totally suggested this game, go me!!

I'd love to go into Toronto to see the next one this Saturday. By the way, thanks for posting this, Derek. Couldn't think for about 10 minutes after I gave up. I completely forgot the word "co-ordinates" for a short time and I felt completely useless after trying... every single puzzle but the Sundial one.

I solved 1 puzzle on my own though, thank God. I got two thirds of the way through the Mantle Clock before my cortex started leaking and I went to the Wiki site.

Excellent quality, unmatched by everything I've seen so far, except for maybe PerplexCity and another or so.

I see the Longitude and Latitude of the Toronto Coordinates match... ( is this really a

Having been a fan of the stone this seems like it will be fun... but does strike me as being a tad frustrating (has anyone else tried synchronising those watches yet!!!!)

On a completely different note - I own a puzzle box identical to the second one, having picked it up last year in Japan.

crazytown, have you tried adjusting your screen's resolution at all? if you're on a windows, bring up the display properties window (like you're going to change your desktop image or screen saver) and fiddle with the tabs at the top until you find one that has a slider bar for "screen resolution". (on mine, it's the "settings" tab... kinda vague...) I THINK (and i emphasize that because i could be wrong) that if you were to use the slider bar to adjust your resolution to a higher setting (like 800x600 to 1024x768) that that should fix your problem... or i could be completely wrong. but give it a try, and see what happens. if all else fails, you could just undo the process with no harm done.

Hey I have just recently found this whole vanishing point site. Can anyone tell me more about it?
Dee

As a Linux-loving, yet often Windows using, (darn you M$ for being everywhere!) geek I feel that I should be whining about the obscene amount of money M$ is putting into Vista promotions. Or the fact that Vista will take up more disk space Just To Run than any other OS that I can think of. Or since 'everyone' knows about it any way, it's just mean to rub it in? Or simply just stamping my feet at the thought of M$ invading yet another bit of my mind.

But, I really can't. Why? Because the little kid in me REALLY wants to grab an eye patch, don a sweet bandana, and say words like "Saavy" and "Avast!" I hate to say it, (it's killing me inside just to type it) but a puzzle of this magnitude really is kinda cool. There are multiple countries, languages, and cultures involved in a global undertaking that doesn't involve war and politics. It really is just for global fun. (And promotion, duh!)

It has M$ spending some of their stolen..uh, I mean "hard earned" (*insert sarcastic eye-roll here) money into something that doesn't require the user to shell out obscene amounts of cash, and ignoring the shameless promotional value, is a project that can help connect people around the globe. (And spark some interest in different cultures, technology, locations, and ways of thinking.)

It's lasting long enough to spread the word and allow more people to become involved. It's challenging participants to "think outside of the box." And, most importantly, it's letting me test out my new LCD screen! All in all it's fulfilling the goals of a typical ARG, keeping the player engaged and encouraging their return. I don't hate it. In fact, I think I actually Like it. Wow.

However, in true M$ style, there are bugs. (A small skywriting snafu in Austin, and the annoying lag on the main screen, to name a few)Sorry, couldn't help it, pointing out M$ flaws makes me feel powerful. I'm competitive girl, what can I say?

Has any one got to the place where you collect those white squares? I realy need help with that

It's totally looking like you can't even play after the event is over. I can't type anything into the submission box at the bottom of each puzzle screen.There's no registration any more. And I'm not seeing many helpful things in the video that would allow me to solve the puzzles even if I could enter my answers. Grrrr!