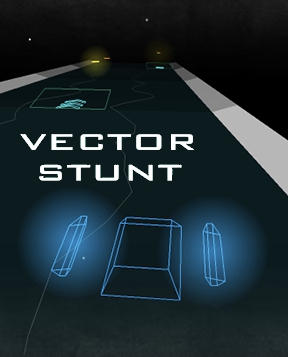 Way back in the mists of time, aka 2007, Dig Your Own Grave released Vector Runner, a psychedelic, futuristic driving game featuring the hottest 3-D graphics of 1982. Now that plucky little vector-drawn ship is back, and this time he's not avoiding anything. In the new arcade action driving game, Vector Stunt, he's gonna pull some rad jumps and do some sweet tricks with you at the helm. Sometimes literally, in a first person pilot view. You can play with the thumping electronic soundtrack by indie band Aerodrone, or you can load your own MP3 to personalize your game.

Use the [left] and [right] arrow keys to control the ship. The track contains squares which represent notes, and picking them up gains you points depending on the color of the note, with the most common note able to be chained for extra points. You can also jump off of ramps to perform tricks by different combinations of the arrow keys. Chain jumps by hitting ramps continuously or by jumping on the rail once in between ramps to get multipliers, up to 10x. Special ramps marked with red allow you to potentially gain a ruby red note for ten thousand points, and those in the middle of the track marked with white allow you to go into first person "pilot mode", which is disorienting but gives a x2 multiplier. Nothing can hurt you except falling off the side, which will cost you ten thousand points a pop, so beware of that. You can use the [WASD] keys as an alternative to arrow keys, and [P] or [Esc] will pause the game and bring up the instructions, if you need a refresher.

At first glance the game might appear to be a music game like Audiosurf, but although the MP3 you load does affect the notes that appear, the overall integration between the music and the gameplay is not that deep, making this more of a "choose your own soundtrack" feature. You can see the music that other people are playing, but only the in-game song has a high score table, so if you want to fight with your friend over who can do better at "Chariots of Fire", you may have to settle that one offline. Slow and gentle music doesn't fare very well, but the provided song "Ready to Love" is perfectly suited to the gameplay, and so are similar energetic songs you might have lurking on your hard drive. It may take a few tries to get the hang of pilot mode, but once you do, you might find it the best part of the game. So crank up your speakers, load your fastest song, warm up those gaming fingers and get ready to chain up a high score.

you can keep your Dragonforce's and Jay-Zs; I just played this to Tom Waits- Telephone call from Istanbul (the Big Time version, mind) and got 4.5 stars...

This game is crap

[Your comment is crap because it adds nothing to the discussion about the game. My comment is already way more insightful than yours. Comments like yours don't usually last long on the site. But since others much more thoughtful than you had commented about it below before I had the chance to delete it, I'll leave it with only this reply. Please, in the future, at least give a reason WHY you thought the game was crap, or your comment will be deleted. Thank you. -Jay]

You must love people who leave such constructive comments.

Game is good, needs some improvements but it's actually very engaging and fun. 4/5

I do appreciate your consctructive critisism. To be fair, I enjoyed this though have always struggled with the beat vs track correlation in these types of games.

Overall, it's fun and feels intense so from a concept/implemenation point of view, I give it a 5

4/5, very engaging and fun but needs some improvements.

[Ah! Thanks for pointing that out! Fixed. -Jay]

It immediately complained that I had another flash player open (youtube) and refused to let me continue until I closed it. It then contnued to not work. Yay.

you sir have killed my productivity!

here On this warm sunday evening as I retire in my study, innocently looking for a few moments diversion whence I happen upon your time-sink of a game! How dare you expect a mere man to resist the temptation to play through every melody found in his hard drive. In the words of the prestigious Axl Rose, "I used to do a little but a little wouldn't do it so the little got more and more. I just kept trying to get a little better said a little better than before." We'll I'll tell you, I don't know who are you, but I sure won't get fooled again. Dream on sweet child o' mine! I'll tell you I have no sympathy for the devil that made this! I..I...I'll stop now. well done. 5/5

I have been quite addicted to this game, trying a variety of songs I have from Rock, Classical, and even Opera from the "Phantom of the Opera" album, which I have to admit was fun. I have to give this game 5 stars way up for innovation, although its not flawless. With the different music I've played, I did not find consistency with how the music correlates with what you see in the game, with the exception of loudness and tempo. There is an element of randomness that the music does not account for. I'm hoping games like guitar or band hero, or DDR would adopt this idea of using your own MP3s to play your game. Very nicely built.