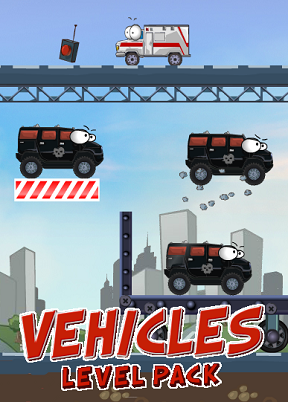 In a world where traffic and urban emergencies run rampant, there is group of anthropomorphic response vehicles looking to set things right. Vehicles Level Pack puts you in the driver's seat of cartoon cars that need to move obnoxious black SUVs while reaching their designated emergencies in this physics puzzle game. You click on the cars to get their wheels spinning and click again to brake in quite a hurry. Shift into overdrive by the pressing [spacebar] key and then clicking to use the automobile's special ability. The emergency vehicles need to use a lot of teamwork and timing to solve the city's problems and have easy-going casual time.

This game is the third installment in the Vehicles series of games and has improved upon the visuals quite nicely. Although nothing new has been brought to the car physics formula, the levels have a little more parking space for extra cars and more creative puzzles for you to solve. There are 35 levels ranging from introductory to skill level to test your driving aptitude on and they are perfect for physics gaming beginners. The wide-eyed, cartoon vehicles and their quirky car conversations even seem more appealing to a younger audience or older gamers with an appreciation for silly puns. Those jokes may only exist in the pre-made levels, but the built-in level editor will keep the municipal mayhem rolling long after you gold star the regular levels. Grab a key, turn the ignition, and start cleaning up the city in this neatly done physics game made for a quick lunch break escape.

This game is plagued with the same issue it's predecessors was, and some other games like it....When playing on a slower/older computer there is a disparity between graphics movements and physics abilities. If all things were equal it wouldn't matter that I'm playing on an old machine, everything would just be slower. But no matter when/how I hit the power up for the fire engine, it will never have enough speed to bridge the gap from one platform to the next like it's supposed to do (I finally checked the walkthrough). I give up, will try again (maybe) from home computer.

Also, how to ditch the dialog bubbles? Extremely annoying and interfere with game play.

Starting/stopping the vehicles is just too fiddly. The accelerate/decelerate too quickly.