Voodoo Whisperer:
Curse of a Legend

Ah, New Orleans. The name conjures up images of excess, whether food, drink, or partying. There's something almost otherworldly about the place, from the music to the exotic food, the vibrant mix of cultures to the mysteries of Voodoo. New Orleans almost seems like a foreign country in our own back yard. If you don't have the time or the money to make the trip, however, you can give Voodoo Whisperer: Curse of a Legend a spin. Designed by Funswitch, this hidden object adventure hybrid brings the atmosphere and mystery of New Orleans to you in the comfort and safety of your own home, or wherever else you and your laptop are at present. 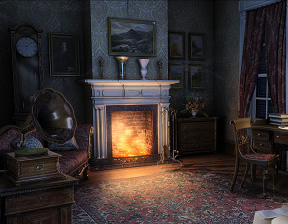 Set in 19th century New Orleans, Voodoo Whisperer: Curse of a Legend is the story of Lillian, a young girl who has just begun her tutelage with Madame Leveau, a Voodoo Priestess. Before they can get very far a curse falls upon both the Madame and the town, suspending all life except for the intrepid Lillian who must — with the help of a disembodied Madame Leveau — travel around the city and break the curse one person at a time while investigating who could have perpetrated such a heinous deed. Follow Lillian as she explores the area, finds lots of useful objects, learns lots of new spells, and even raises and speaks to the dead to discover what has happened to her town and her beloved family.

While in many ways Voodoo Whisperer plays like a standard point-and-click game, there are a few interesting differences. There is a changing cursor that indicates objects that you can take, objects that can be inspected, areas that demand a closer look, and places you can go, something that you will find in most games of the genre. What is less usual is the fact that Lillian has no journal (or the equivalent thereof) to keep track of what has happened and what is going on. Instead the player has a small button that helps keep track of goals, and in the place of a journal is a grimoire. Yes, a magic book, and all that magic book does is collect spells that Lillian learns along the way. The grimoire will display recipes for spells needed to knock out an alligator, release a person from the insidious curse that infects the town, or brings the dead back from the beyond for a little chat about recent events. The grimoire keeps track of these spells as well as lists of items needed for the recipes to create the spells and detailed instructions on the rituals to make them work. 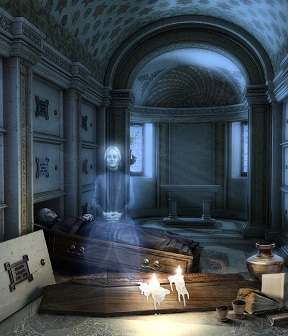 Another unusual facet of gameplay is the fact that you can walk away from hidden object scenes with more than one useful object. Some scenes in fact can produce two. And while most hidden object games feature a single sparkle for areas or items of interest and a shower of sparkles for hidden object scenes, Voodoo Whisperer is unusual in that you get a small scattering of sparkles for both, at least if you are playing in regular mode. There is also an advanced mode of gameplay, in which there are no sparkles to indicate areas of interest, and there are less hints and the refilling hint timer fills much more slowly. Another nice feature is the fact that there are four "permanent" spells attached to the grimoire: The usual refilling hint feature along with three others that allow the player to move heavy objects, break things (always fun), and set fire to things (even more fun!).

Analysis: It seems there is an abundance of hidden object adventure hybrids with supernatural themes on the market today, so it's nice to find one that lifts itself head and shoulders above the crowd. Voodoo Whisperer: Curse of a Legend has all of the standard tropes of today's hybrids: finding, using, and combining objects; large hidden object scenes; and the usual mini-games and puzzles. What Voodoo Whisperer brings to the table is a twist on the usual gameplay along with fantastic atmosphere and a gripping story that keeps the player engaged while sending shivers down the spine. 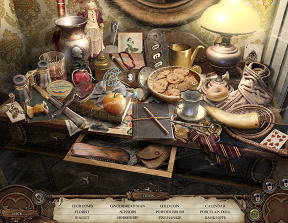 The graphics are simply stunning, whether you are looking at the locations in and around town, the animated cut-scenes between chapters, the brilliantly detailed and almost photo-realistic hidden object scenes, or the lovely mini-games. The story takes place entirely at night and pale moonlight kisses each outdoor scene, while gentle oil lamps and fires caress the indoor scenes and give them a warming glow. Everything in this world seems on the edge of decay as befitting a town built basically on a swamp, and the prevalence of dust and cobwebs adds to the eerie feeling of abandonment as Lillian makes her way through a town that, while only asleep, feels almost dead. Adding to the experience is the chilling sountrack and incidental sounds along with some competent voice acting that brings the game (and the time and place) alive.

The length of gameplay depends on which mode you choose. With the faster refilling hint timer and the ability to skip the mini-games the regular mode allows, you can expect about 2 to 3 hours of play. Gameplay will be longer in advanced mode as more exploration is needed and less help is available. The thing that might irritate players most, though, is that the story builds to a crashing crescendo only to jar you with those fateful words, "to be continued..." There are some minor niggles also about the clickable areas which in the hidden object scenes seem a bit too small while in the outside world they seem a bit too large, making the picking up of objects near the edges of the screens (near travelable areas) a tad difficult. Also this story is drenched in Voodoo rituals and spells, which may offend some folks.

The minor criticisms, however, are far outweighed by the casual delight contained within Voodoo Whisperer: Curse of a Legend. The atmosphere is fantastic, the story gripping, and a lot of effort has been made to conform to at least some historic consistencies. The Madame is based on a real person, Marie Laveau, the Voodoo Queen of New Orleans in the 1830's, a woman still venerated in that city to this day. The hidden object scenes are a joy as everything you find within looks and fits within the time period with a couple of minor exceptions. Happily no boom-boxes and skateboards are to be found anywhere. Perhaps the only complaint most players will have is that it is all over way too soon, leaving you hanging for the sequel which is, according to Funswitch games, already in the works. If you don't have the time or money for a vacation, Voodoo Whisperer: Curse of a Legend is just the antidote, a perfect way to travel to an exotic city and submerge yourself within a story that tells a tale of the macabre.

A Collector's Edition is also available. It includes wallpapers, an extra chapter to round out the story that contains six hidden object scenes, and a built-in strategy guide. Remember that Big Fish Game Club Members pay only $13.99 for Collector's Editions (or 2 club credits), and collector's editions count 3 card punches of 6 total needed for a free game.

I hope it wasn't just my ignorance and prior question that prompted that massive paragraph of italics. ^^;;

@Logical Ghost
Nope, it's always been there before we complained about it and the Babylon Sticks comic.

First time asking a question about a game but i cant get to the hotel after leaving the saloon in Voodoo Whisperer!
8vcuuv