Wake Up The Box 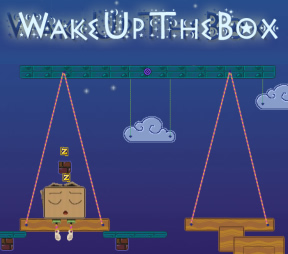 Hey! Will someone tell that box that he can't sleep there? He might fall and hurt himself! And we all know how well that worked out for that Humpty fella. I don't care how you do it, just wake him up!

Yes, it seems that narcoleptic Mr. Box has gotten himself in a bit of a conundrum. Or rather, twenty conundrums. Your goal is to wake him up ‒ push him, pull him, tip him over... whatever gets the job done. Problem is, all you have to work with are these blocks of wood, and what's worse, you can't even place them where you want! They may only be attached to existing wood structures, and once you stick them on, they stay stuck. Thus, Eugene Karataev's (Splitter) latest game Wake Up The Box provides a unique challenge among physics puzzlers, with balance and centers of gravity taking center stage. Unlike most games, you can't simply increase the momentum in the system by dropping blocks from a higher height, so you'll need to find creative ways to get things moving by utilizing leverage and upsetting the balance of objects in the level.

As in Splitter, Eugene has managed to tweak the basic concept of a physics puzzle just enough to provide a fresh take on the genre, requiring new ways of thinking and new types of solutions. However, the execution of Wake Up The Box doesn't quite stack up to Eugene's previous work. At a mere twenty levels, it won't last much longer than a coffee break, and even then there are a couple levels that probably should have been left out. (When even the video walkthrough restarts a level 5 times before getting it right, you have to question whether it belongs in a puzzle game.) Of course, the game's length is what you make of it ‒ you don't want to get dragged into an hour-long game when you're trying to kill 15 minutes.

Play all the "Wake Up!" games:

As for the non-gameplay aspects of Wake Up The Box, there's both good and bad. The hanging clouds provide just a touch of whimsy, and come on... a box with arms and legs! The sounds could have used a bit more polish ‒ the end-of-level jingle abruptly cuts off the otherwise soothing game music. On the other hand, Mr. Box doesn't seem to be bothered by it; I'm not sure I've ever seen anyone so happy to be woken up, especially someone who wakes up in midair!

So there you have it. Short but solid, Wake Up The Box provides 20 winks of phuzzle goodness and a bit of charm to boot!

Play Wake Up The Box

The game feels a bit glitchy to me. Sometimes the physics just stops reacting to anything :(

Ah, OffHaz, I didn't find any glitches to speak of but I might have been lucky.

It's a real shame you hit that wall and I can imagine it's extremely annoying when the physics go wrong because I actually found it a really pleasant variation on the physocs block game and it was a nice moment when I realised I didn't have a choice to pick the order of blocks and had to work to a real-time window of opportunity.

I thought it was a very well done game indeed.

Pretty well done, and the last couple of levels were fun than challenging.

It was a fun enough game that I came back to give it a second try, and was able to finish it the second time.

The issue I encountered was on level 11. Perhaps it wasn't an error but maybe there was a block I couldn't see that was blocking my lever from moving?
In any case, it was a pretty enjoyable game though it is not anything revolutionary. It really is just a different incarnation Box2d with a couple of rules tacked on

I liked the music.
And the challenge to think creatively.

OfficiallyHaphazard, I have that too. But it seems as if the "Ololo Games" logo is the block that's preventing the lever from moving

Short but charming. The puzzles were fun and logical, sometimes requiring a little dexterity (read: laptop users beware) but nothing unusually difficult. The gfx and music are what made the game for me.

Mr. Box doesn't look happy when woken up at all. In fact he looks positively terrified.

I'm not sure how one can mistake that look of absolute terror with "not being bothered". :)

Not really a great fan of the game btw. Physics seem rather wonky and time-based puzzles with no undo option can REALLY become irritating when using a laptop. Besides, some levels make no sense. Why doesn't the seesaw in level 11 swing the other way?

I usually hate physics games, but I love this one. Does the music remind anyone else of the clock tower from Majora's Mask? I keep expecting to hear the box chuckle like the Happy Mask Salesman ;)

Cute game, but I had to stop playing because I couldn't get past level 11. The logo apparently stops the lever, and I couldn't figure out how to wake him up from the other side.

OfficiallyHaphazard & Sam: There is a block just behind the logo. It took me a long time to figure that out, too! Even looking for one it is hard to see.

I agree that Mr. Box is terrified! I feel bad every time he wakes up. I keep playing anyway, though :P

Every puzzle it doable, just think it through. That said, short and easy game that I wish I knew what the scoring criteria was. At the end of the game you're given a final score yet at no point did I see where it was or how it was tallying the score.

A fun little game, shame it's so short...also the music, whilst very pleasant, seems to be implemented a little sloppily (sudden points of total silence after the short victory music are jarring).

@Username: a score for each level completed appears on the level select screen below the number of each level - it appears to be based on how quickly the level is completed.

The balls will eventually drop down to your contraption, one will roll towards the box and, with a bit of luck, knock it off.

There's a link to a video walkthrough in the game, everyone asking for help.

I can't get videos on my laptop so could someone please explan level 19 to me please?

Username, Stormy, and any others who are confused about scoring: Each level is worth 500 points minus the time you take to complete it. 500 x 20 levels = 10000 - time taken to complete each level.

I finished the game. On level 20, you really don't do anything, which I don't like. Other than that, the graphics/audio is great.
Tips:
L. 19

It's pretty much a conveyor belt. Wait for the string to move, then position the stick directly under the first arrow. Wait for a min., he should wake up.

Postion the stick between the two purple circles on the wood. Attach the big circle to the edge of the wood connected to the string. The circle should hit the aqua sticks.

omg this game is hard i can not beat level 7!