*BEEP* Hello, you've reached Dora. I'm not available right now. I'd like to pretend it's because I'm off doing something glamorous or daring, but, let's be honest, I'm probably either sleeping, busy crying because I remembered Donna Noble's goodbye (again), or got distracted on the way home petting a cat that was just... so soft. Luckily for you, Weekday Escape is scheduled ahead of time. This week! Vitamin Hana calls for "ALL ABOARD", but it ain't gonna be easy. Esklavos proves that witches (some evil wit-ches) just can't be trusted around children. And Sanpoman, well... I think they're feeling a little prickly today. 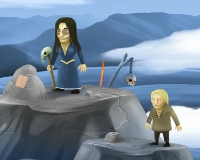 The Witch and The Child - Look, I already don't plan on having children, although it has more to do with a general unwillingness to share my Fruit By the Foot and what cartoons are on TV at any given time than a fear of witches absconding them to mountaintops to turn into soup. But, well, thanks for giving me another valid excuse for when my mother-in-law asks next time, Esklavos! This particular witch is looking for four talismans in return for the child, and if bad 90s anime has taught me anything it's that giving evil people amulets of great power is a bad idea, but, well, ya gotta do what ya gotta do. 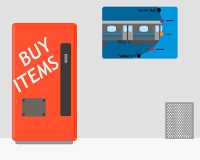 Train Station - I've never been on a train, so I'm a little miffed that Vitamin Hana has pulled this bait and switch and locked us inside the station. I've been running blindly at walls for an hour now, and all I have to show for it is some banged up luggage and one extremely disheveled owl. So I guess this one's all on you, kiddo. Find a way to get us on that train, before the bizarrely consumerist message on that vending machine starts to get to me and I open my wallet. 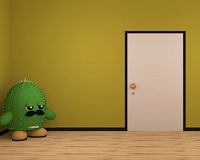 Cactus Room - There's no English writing in this game, but even though I can't read Japanese, I still think I know what's going on. Sanpoman's supremely disinterested cactus has locked us up, and you must attend to its wishes before we may be freed... wishes that apparently involve smiley pictures, botany, puzzles, and slots. Man, I don't know. The ways of the cactus are mysterious and many, but mostly just kind of painful.

We love escape games, and our readers love talking about them and sharing hints! How about you? Let us know what you think, ask for clues, or help out other players in the comments below.

Dora!!! I check every Tuesday after midnight in the hopes that Weekday Escape has been posted. And tonight it was!!!

Thank you!! And please ask Jay for a raise :)

I'm stuck on the up/down code in Vitamin Hana ...

and found the clue

on the far turnstiles while using the glasses

click again to see the far turnstiles close up?

What a horrible way to get a train ticket!

Haven't played it yet, but the cactus in Sanpoman's latest reminds me of McPedro from "Girls with Slingshots".

in cactus room, i'm stumped on the puzzle on the cabinet

i thought you were supposed to click the side the leaves of the potted plant next to it were on. the buttons and number of place the leaves branch out match up. but it won't accept that as correct. what am i doing wrong?

the power of posting

i input the code by switching the lefts and rights and it worked :/

After I solved some of the puzzles, the train pulled up to the station.

I'm like, oh noes! I better get through the rest before the train takes off.

It was rather tense, but I made it. Wooooo!

Quite clever and tricky!

I love cactii and thought these were pretty adorable. And I really loved the art/style of the game/room.

Thanks Lynne, you're very kind. :)

And I love Girls With Slingshots! I identify with Hazel too much. I was so sad when it wrapped, but the creator did well by it, so I'm happy for her.

I had to consult the walkthrough for Cactus Room because

Where on Earth do you get the left/right 'leaf' clue for the middle drawer?

It also took me a while to notice

the slightly different looking tile/s under the sink

Wasn't tooo terribly difficult apart from that though.

Did anybody figure out

if we were meant to do something with the pink bud on the cactus sitting on the floor? I tried to water it but nothing happened.

The branches you take to reach the bud correspond to the left/right on the cabinet.