Find out with these games below! Or not! 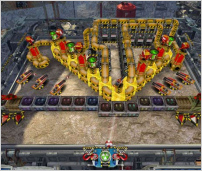 Nuclear Ball 2 (Windows, 12MB, demo) - Games are always more fun when flavored with a little destruction. Nuclear Ball 2 is one part Breakout, one tiny part pinball game punctuated with explosions, breaking glass, crumbling boxes and exploding... everything! It's surprising how entertainment value carnage can add to a game, and Nuclear Ball 2 features destruction of the good kind. The usual battery of paddle-altering power-ups fall from broken crates, but cool items such as power and exploding orbs make it far more interesting. A good variety of weapons and unique stage design puts it in the same category as games like Professor Fizzwizzle. You know, just with bombs. 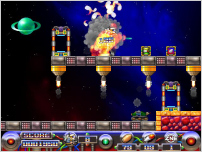 Exolon DX (Windows/Mac, 13MB, freeware) - A remake of the classic run and gun game from the late 80s, Exolon DX falls squarely in the "remake done right" category. The controls are tighter, the visuals are better, but the core gameplay remains virtually unchanged. Take control of a futuristic soldier as you fire a gun and rocket-propelled grenades to defend yourself against aliens and robots of all kinds. Perhaps the game's homepage sums up the experience best: "Shoot stuff, jump over other stuff, avoid further stuff."

Synaesthete (Windows, 90MB, free) - Nothing short of a brain-altering experience. Synaesthete is an isometric action shooter welded onto a musical game akin to Frets on Fire. You play a stylized hero named Zaikman who travels from zone to zone vanquishing foes. Move with the [WASD] keys while hovering your right hand over the [JKL] buttons. A music meter appears when enemies arrive and you must tap the right-hand key set in time with the tune. You don't have to hit every beat and can concentrate on just one column, but the more accurate you are the more powerful your attacks. It's a work-in-progress being developed by four students at DigiPen University, but already it's got my vote of "fun". 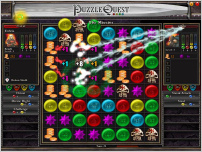 Puzzle Quest (Windows, 35MB, demo) - Finally, PC gamers can enjoy the hyper-addictive Puzzle Quest without walking across the room to pick up a DS! Just released for Windows, Puzzle Quest blends a Bejeweled-esque match-3 game with an RPG. As you swap tiles and make matches you'll damage your enemy, collect mana to cast spells, and gain gold and experience points to level up your character. It's the pinnacle of addictiveness and is blazing its way across nearly every gaming system currently on the market. You can buy Puzzle Quest in some retail stores or purchase online at Big Fish Games. 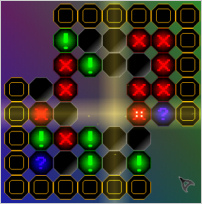 Shellblast (Windows, 23MB, demo and freeware) - Vertigo Games brought us the free Acidbomb ages ago. The team released a souped-up retail sequel called Shellblast earlier this year that is now available for the extra low price of $4.95! The object is to diffuse each puzzle (which is a bomb) by detecting which tiles are pistons and which are safe. The game plays a lot like picross where you must use clues to narrow down possibilities. It's a tense cerebral experience that really heats up when the bomb timer starts ticking down to zero.

It's probably worth mentioning that Puzzle Quest is also available on the XBL arcade.

I recognise that formula!

And remember, Look Around You!

Man, I need to chew some Garry Gum to figure this out...

For Synaesthete, I need a graphics card that supports shader model 2.0 or higher. Darn. I really wanted to play this game!

There are no words to express my love for Look Around You. Also, dang, Puzzle Quest is addictive. Its gameplay is right up my alley, along with its excellent music and graphics. The adoption of different strategies depending on your class is also great fun.

But while I'm a sucker for games with RPG elements, I find PQ's generic RPG trappings (defeat fantasy-ish monsters in a medieval-ish era because that's what you do) to be somewhat dull. At least there's no Ye Olde English...ish. But the hero(ine)(s) and the storyline so far in the demo aren't very compelling at all, and while that doesn't negate all of the game's great parts, it does leave me a little cold towards it. Plus, there's something just a little strange about a game that's utterly humorless about how the fate of a country depends on you Bejeweling your way to the top.

Still, I spent four hours on my first playthrough of the demo alone. And will probably play more later. And might shell out for the full game later on if at least one more person in my family will play it and I find $20 just burning an absolute hole in my pocket. Because, yes, addictive.

I've been playing the ShellBlast demo for several hours now and I just CAN'T get enough! The music is excellent, the tension and frustration of being so close to solving the puzzle, but simply not having the time to keeps me on edge! And this game has endless replay value. The puzzles are randomized each time, so sometimes you have to wait for that excellent board in order to solve it. Other variations makes this game FAR worth the price. I'll gladly skip Taco Bell once in order to pay for this game! I'll be playing this one for months to come!

I want a calculator with a Stun Mode!

well, i finally got the nerve to pony up the money for shellblast (my first ever online game purchase, thank you very much), and i must say that it was well worth the five bucks. i was a bit skeptical at first, since i was afraid the remake would just be a carbon copy of ac!dbomb 2. but once i unlocked the extra features, it was well worth it. i love the puzzled mode, which really forces you to think in a totally different way than the other puzzles in the game. the endurance mode is also greatly addicting. i was rather hoping they would put something into their next version.

the music seems to have mostly changed from the first two games. instead of the mostly-synthed music of yesteryear, i noticed the new tracks have a lot of... guitars? what? totally didn't see that coming. it's had some mixed effects, but i'd say i generally like it.

shellblast definitely filled in some necessary gaps that i felt were missing in the first two games. props to the vertigo games team for a job well done!

Puzzle Quest is awesome. I bought it the day it was available for pc even though i already own the DS version. I wanted the online play. The story mode got me in again right away. Bye bye sleep.

The balanced the game better, wich was the only worry for me in online play ... i'm hooked as day 1 again.

Wow, Synaesthete is amazing. If they can figure out a way to let me play it on a dance pad, I'll be a happy camper.

Oh, and you don't "diffuse" a bomb. You "defuse" it. Light diffuses. Bombs must be defused. They got it wrong in the game, too.

Whenever I try to download Synaesthete, it goes normally for a while and then suddenly says "Download complete". Trying to run the resulting file tells me "Your installation files are corrupt. Please download again." This is bad.