More games to help your weekend be more weekend-ey than ever! The first item on the list will keep you occupied for several hours, a somewhat rare thing with games of its quality. The rest are great for short spurts or long marathons, whatever helps you get the best score!

The Hive (Windows, 4.5MB, free) - An extremely compelling platform adventure game that plays like a Metroidvania with a bit more linearity. In a small, scenic town, people are mysteriously disappearing. Reporter Alex Rig is in the area, trying to find some answers, when some strange things begin to happen to him. Explore the world with standard running, jumping, and ledge hanging, and take out enemies using a few different inventory items. Collect power-ups to gain access to new areas. The story and atmosphere are surprisingly good for such a simple game, and you'll find yourself compelled to keep going after just a few seconds of playing.

TimeStill 2 (Windows, 7.8MB, free) - A sequel to the original TimeStill unleashed earlier this year, TimeStill 2 brings back more of the unique visual style along with plenty of platform gaming. You control a ball that's working its way across each stage collecting floating shards. Use the [z] key to freeze time, pausing hazardous objects while they're out of the way and turning dangerous things like bullets into harmless platforms. It gets challenging after just a few levels, but just like the original, it's worth pressing forward!

Cenfinity (Windows, 7.5MB, free) - A shmup of the "see how long you can survive" variety, Cenfinity is a little different because it takes place in a circle. Your ship can move forwards or backwards, fire its weapon (not much of a shooter otherwise, is it?), and increase or decrease the circular path's radius. Enemies flow in from the side, you take them out, and stay alive for as long as you can. See how many foes you can vanquish before the inevitable 'game over' arrives! 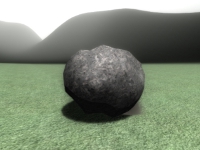 The Myth of Sisyphus (Mac/Windows, 9MB, free) - It's just cool that this "game" exists. Sisyphus is a king punished by having the constant desire to roll a boulder up a hill. Once it reaches the top, he has to watch it roll back down. The process repeats throughout eternity. As you can guess, this game is just like that, and it presents an interesting sort of commentary on what it means to be a gamer. Or, it doesn't. It's entirely up to you how much you think about the experience. Either way, you get to push a rock in 3D.

Note: All games have been confirmed to run under Windows 7 and are virus-free. Mac users should try Boot Camp, Parallels, or CrossOver Games to play Windows titles, Linux users can use Wine. If you know of a great game we should feature, use the Submit link above to send it in!

In Myth of Sisyphus,

the "secret ending" had me in stitches.

Uh-oh. The Hive's website seems to have died, did enthusiastic JiG users crush it perhaps? oops.

ANyone know of an alternative link?

I beat The Myth of Sisyphus. The rock got stuck at the top of the hill.

While playing The Myth of Sisyphus I must have accidently pressed the "crash my computer" button.
There I was merrily pushing a boulder up a hill when I pressed F to nudge it, my mac went into some strange spasm it's never done before and I had to turn it off without saving anything. I don't know if it's part of the game or not, but I'd taken a break from some typing to "play" and I've lost 30 minutes work.

If it is an intended feature of the game, it makes it's point a little too well! Very innovative stuff.

LOL, Adam, I don't mean to laugh at you losing your work, but your comment is very funny.

Did you try to Force Quit the application first? Mac OS X provides a means of force quitting errant apps so you don't lose your work.

I hate hearing that your computer crashed-I'm very sorry about that Adam. Make sure you save your work before running games (good advice no matter what game you play, even AAA ones).

Although in this case, this seems to be a crash because of improper testing on my part. I did have one mac user test the game, and he reported no problems (but I don't recall if I told him to press F or not).

And the boulder being stuck on the hill is a pretty funny physics bug, that I left in. Sometimes it wouldn't occur even after 10 minutes of playing, and sometimes it would occur on the first trip up the mountain.

Thanks for typing up my game, I enjoyed reading it.

(and cenfinity was extra fun, so kudos to whoever made that)

Your game was really great Allan, I'd give it 4 mushrooms if it weren't on Weekend Download, but that's okay.

I'm having trouble with the end boss on The Hive.

I can't get him to STAY down! DX What do I do when he's lying on the ground before he respawns? Do I just have to kill him a certain number of times or is there a trick/weakness?

Has anyone else managed to free the prisoners or find the "Day 1" evidence file in The Hive?

CURSE YOU, POWER POST.
I figured it out :D

Ah, I keep getting stuck on Myth, it's at

The bossfight with zeus, I can't seem to throw both the black hole rock AND the tsunami one at the same time, I hear you *EXTREME SPOILERS*

Have to know this is a joke, A la ZomboCom and You Have To Burn The Rope

But it isn't working!