What's the most entertaining household object you can think of? Did you say "wooden crate"? Or, perhaps, "magnet"? "Broom"? You probably did, and since you did, you are rewarded with games that use said entertaining objects to provide even more entertainment in a digital, computerized form.

Super Crate Box (Windows/Mac, 20MB, free) - Remember the days of standing in sticky-floored arcades pumping quarters into a machine that would allow you to keep playing a game so you could enter your initials on the high score board? Super Crate Box aims to recreate that feeling (the high score bit, not the sticky floors) with its own brand of high-action 2D arena... action! Your goal is to pick up enough crates to continue to the next level. Each crate gives you a different weapon, a weapon you need to use to keep the constantly-spawning enemies at bay. It's a simple mechanic that's masterfully done, as you can't hold on to better weapons because you need more crates to continue. Play it once, die, play it again, live a little longer, then keep doing it because it's so darn fun. 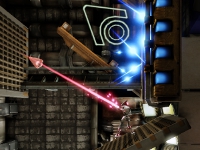 Magnesian (Windows, 350MB, free) - A heavy-hitting release from PineApple Fish Studios, Magnesian plays on the wiliest of the non-contact forces, magnetism! (Take THAT, gravity!) A 2D physics puzzle platform game with a 3D look, you are equipped with a gun that can fire both positive and negative beams of magnetic energy as well as a "switch" weapon that can reverse polarity of objects around you. Using the forces of repelling and attracting, work your way through some daunting puzzles that require both serious thinking and some quick reflexes. It's a rather quiet game on the surface, with very little to distract you from the pushing, pulling, and arrangement of magnetically-charged objects, but once you dig into the handful of levels, you'll appreciate being left alone to focus on the gameplay. You'll also appreciate box surfing. Seriously, why can't we do that in real life?!

Dustforce! (Windows, 29MB, demo) - A demo for a work-in-progress game by Hitbox Team that shows a ton of promise. Dustforce is a puzzle platformer that places strong emphasis on smooth, flowing acrobatics. Your broom-toting character sweeps up litter as he/she runs by. You can jump, dash, double jump, wall run, wall dash, and everything in-between, giving you a surprising amount of freedom and agility as you navigate the game's crowded levels. Sweeping things gives you points, but some blocks vanish after being swept, while still others give you a bonus jump. The controls take some time to get used to, but once you're in the groove, the game flows smoothly and you can pull off some great stunts. A very fluid game that will hopefully see a successful full release soon!

Mega Man 8-bit Deathmatch (Windows, 55MB, free) - Exactly as the name implies, MM8BD takes classic Mega Man characters, levels and music, places them all in an arena, and lets you duke it out in style. What the name doesn't imply is that the game is in 3D, very much like the early first person shooters out there. Gather weapons as icons on each stage, and pick up energy and weapon capsules to keep everything charged up. Then, well, shoot everything that you can see! Classic death match action, with plenty of nostalgic 8-bit visuals and music. Multiplayer and single player modes are both available.

Note: All games have been confirmed to run under Windows 7 and are virus-free. Mac users should try Boot Camp, Parallels, or CrossOver Games to play Windows titles, Linux users can use Wine. If you know of a great game we should feature, use the Submit link above to send it in!

Dustforce is too hard. Too many spikes. Consider an easy mode where spikes/lethal falls are removed? It really undermines the game when failure - even a slight deviation from a preset route - means a tedious restart, removing the sense of freedom the control scheme is supposed to generate.

Magnesian looks awesome, but when I try to run it, it says I'm missing d3dcompiler_43.dll, which appears to be a directx file, even though I just updated DirectX.

RE: Dustforce, I don't think it's so hard, just the controls are a little wonky. I can't seem to move when on the ceiling unless I'm already moving. Otherwise great concept, maybe I'll practice more.

RE: Magnesian, I just didn't get it.

RE: Super Crate Box, now this game is HARD! Way fun though.

Is it just me, or does the megaman 8-bit deathmath look like it's the exact graphics and style as minecraft?

Wow. The crate game totally took over my life there for a while. It was worth every lost minute. Megaman's a little hard though. Oh well.

Super Crate Box is way deserving of its own post! :D

Magnesian looks amazing. I cant wait to download it!
I've played the Demo version of DustForce! and it's a nice, smooth game that is super fun. I can't wait till they produce the full version. :D

Super Twitchy:
Only as long as all cube-based 3D tiles look like Minecraft; the game had its graphics taken from the original Megaman games.

SCB is a fantastic game.

Megaman is tons of fun. Very fast-moving characters make for a frantic gameplay experience, and the levels are excellently designed. There's always a reward for exploring the level, and the levels are full of shout-outs to Megaman level designs, such as the famous disappearing blocks. Finally, the huge variety of weapons lets even a mediocre deathmatcher like myself win with good tactics.

However, there are two very strange things that seem to be holdouts from the Doom engine it uses. First of all, the default controls are very silly (no WASD, keyboard controls for strafing), but you can change them to standard FPS controls. Second of all, it has some element of auto-aim, so shots don't always go to the crosshairs. This is nice if you need to snipe someone at range, but it's not as nice when you need to lead your target.

"Magnesian looks awesome, but when I try to run it, it says I'm missing d3dcompiler_43.dll, which appears to be a directx file, even though I just updated DirectX.

this fixed it for me

What is the way you use powers?

Hey guys, I'm from the development team of magnesian. You shouldn't have any issues with the install if you are online at the time... so that's weird. Thanks cluffy for the link, I'll keep that in case the issue comes up again.

I'm really struggling with the MM game too. Some of what is said above sounds like there are levels to the game?...all I have is one room type battles. That's fine, and kinda what I expected from the title, but if there is some more-platformer-like-mode that I'm missing, I'd like to see it too.

My main struggle with it is also that it seems too hard. I figured out a control set that works great (which means, it usually decreases my death rate) but it's just not enough. I still can't kill enough to progress past the first battlezone and I've been playing since I found it on JIG. Is there any way to decrease the difficulty (make the AI dumber, weaker, less trigger happy, less opponents in a stage, etc., whatever) or give me some sort of advantage (extra extra life, choice starting weapon, infinite ammo, etc., anything) for at least the first run through? If there were difficulty levels, I'm sure I'd play until I'd beaten them all...I just sense so much potential for me to totally love this game if I could build the challenge as I succeed...or something!

There are "levels" in the sense that there are a series of 1-room battles, culminating in a boss battle. Good platforming skills will sometimes net you a good weapon.

It's fairly difficult, but I found the secret was effective use of your weapons. Trying to kill anything with your starting Mega Buster is a recipe for disaster, since the bullets move slowly and the AIs dodge like crazy.

However, certain weapons are pocket-sized murder machines. For example, in the first arena, use the Gemini Laser in tight corridors, where it will bounce off the walls and become nearly undodgeable. Other good weapons include the Air Shooter at point blank range, the Magnet Missiles at long range, and Shadow Blades or Rolling Cutters from ambush. Keep practicing and you'll get it.

I know this was made in 2010 but I came across it. It's funny how in 2014 you have games like Minecraft being the household game with big servers being advertised on place like http://minecraftservers.com and so on. The industry has got massive.