The Weekend Download arrives with glee
Bringing fun games to you, from me
Just download and play
Then sit there all day
On Saturday you couldn't be more free! 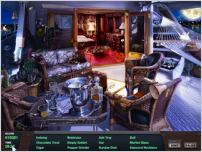 The Nightshift Code (Windows/Mac, 40MB, demo) - A hidden object/adventure game starring a young security guard, Mike, who catches a museum thief late one night and discovers the rare artifact she's after is connected to his father's disappearance. Instead of reporting her, he joins Isabel as they travel across the globe searching for items and solving cryptic messages. Along with the comic-style cutscenes, unique storyline and great presentation, The Nightshift Code throws a curveball with riddle-type item clues in every stage. For example, the list of objects might include "four tapes", but each tape is a different object -- a roll of tape, a cassette tape, etc. Even though these clues can be difficult, you enjoy them nonetheless, and they complement the hidden object game quite well.

Painajainen (Windows, 5.2MB, free) - Similar in theme to Seiklus and, to a lesser extent, Knytt, Painajainen is a 2D platform exploration game about a boy who gets trapped in his own dream. The goal is to gather all the orbs to open a door, and to do that you'll need to walk, swim and fly into every nook and cranny of the surreal world. 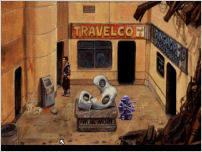 Beneath a Steel Sky (Windows/Mac/Linux, 2-7MB, free) - Widely regarded as one of the true classic adventure games from the early 90s, Beneath a Steel Sky is set in a sci-fi cyberpunk universe and tells the story of a young boy called Robert who is the sole survivor of a plane crash in "The Gap". You'll need ScummVM as well as the game file itself, both of which run on practically every computer system ever conceived.

Simon Tatham's Portable Puzzle Collection (Windows/Mac/Linux, <2MB, free) - Not one, but 27 small puzzle games ranging from number puzzles to familiar games (such as Minesweeper) to more original fare. Perfect for killing a few minutes in-between projects (or distracting yourself from homework). Windows users can download the games individually, while Mac/Linux folk will need to grab the whole collection in one file. 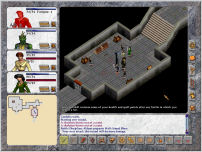 Avernum 5 (Windows/Mac, 26MB, demo) - The fifth installment of the highly-acclaimed role playing series, Avernum 5 sets a standard for independently-made RPGs. Sure, it doesn't look like much, but once you scratch the surface you'll realize there's so much to enjoy about this game. Warning: you'll have to abandon a bit of your casual gaming habits to truly enjoy Avernum.

Very glad to see Beneath a Steel Sky here. One of the greatest adventure games ever!

Hmm...Painajainen is fun, but I'm finding lots of bugs..getting stuck in walls, etc.

Avernum 5!
i played the previous 4, either as exile or as avernum, what fond memories...

I've followed the Avernum series since the first one came out back several years ago. It's nice to see it featured at a site like this because I've always felt it never got the attention it deserves.

Plus, it's nice to see some free downloads for mac for once around here!

nm, I figured it out. Anyways, has anybody played flight of the amazon queen? is that one a good game as that is also available on thier site.

For anyone having trouble or needing more detailed help getting ScummVM running:

On the ScummVM page, there is a long list of different versions of the ScummVM available as release binaries.

For example: If you have Windows, you can either download the installer, or download the zip file that contains the executable and all supporting files in one directory (no installer needed).

I'm on a Mac, so I downloaded the Mac OS universal disk image. Then I opened the disk image, and copied the ScummVM application to my Applications folder, and ran it from there.

Then, once you have the ScummVM engine, you need to download the game files. I downloaded the freeware CD version.

well, thanks anyway although I figured it out.

Also, how the heck do I do a savegame for Beneath a Steel Sky? there doesn't seem to be a way to make a savegame, although there is an autosave point apparently.

Sorry for the double post, but I would REALLY like to know how to save the game in Beneath a Steel Sky because I glitched up at one point when I tried to talk to Lamb and I couldn't get unstuck. So I had to restart the game.

Also it is pretty funny at times :)

In Beneath a Steel Sky, hitting F5 brings up a menu where you can save your game.

although I seem to be stuck now

after I've blown the powerplant pipe and I have a wrench, pipe, security card and a lightbulb.
I've also already given the robot a new shell and gotten into the storeroom, but the guy took some items from me.

smjjames: Beneath a Steel Sky is an old and well-regarded adventure game; if nobody helps before you get impatient, I'm sure you can easily find a walkthrough somewhere. I've beaten it myself, but unfortunately I don't remember what happens at that point.

Anyway, since neither the Yoyo Games download nor play online thing work for me, here's a link to an alternate download site for Painajainen.

[Edit: links fixed. Please put the URL between double-quotes when using HTML tags to create a link; or, you can just type out the full URL and a clickable link will be created for you automatically (example below). -Jay]
https://jayisgames.com

yea, I was able to find a walkthrough elsewhere.

I am having an issue in one part of the game though. (long spoiler ahead)

in the part where I have to pick up the tuning fork (it calls it an oscillator later on)but I'm supposed to blind the eye first. For some reason I can't blind the eye and while the walkthrough says pick up the item immediately, the eye moves immediately as well. So it just zaps and disconnects me whenever I try and pick up the tuning fork.
The problem is, that it is needed for somethinhg later on and I can't progress without it.

Nobody answered my question about the 'Flight of the Amazon Queen'. While I could easily wiki it, I'm just wondering what other people think if they have played it.

btw Tacroy, your links aren't working as in they aren't clickable. Just letting you know.

Painjainen is really, really buggy. So much so as to be almost unplayable. The flow of the game, which has the potential to be relaxing & mellow, is ruined when you have to close the game once every few minutes because you got stuck on something & can't move.

Which is too bad, because it has a pretty nice presentation & feel.

Haha, I remember when Avernum was instead called Exile, and was 2d instead of Isometric. That was a great game, except I can't play the older version anymore cause I'm running XP.

I'm feeling the love! Thanks for all the Mac stuff, John.

Not bad John, not bad...but next time I want to see the whole thing rhyme.

i'm definitely loving this puzzle collection... i've read about so many of the puzzles credited to the nikoli company (like the light up and rectangles puzzles), but this was the first chance i've ever gotten to try my hand at them. i was up a bit too late last night trying to see how big i could make the puzzles and trying to solve them (and failing miserably). props massive to that link!

Wow! I'm excited about Beneath a Steel Sky, it was one of my first games, along with the Monkey Islands, Day of the Tentacle and Sam and Max Hit the Road. Hope I can still beat it.

Definitely enjoying this puzzle collection. It's nice to have such a light program with as much to do as this does. Perfect for a quick puzzle fix.

I love the Avernum games! The whole bunch are really fun. :D

I gotta say, the puzzle collection is pure awesome. He manages to pull off a generic interface to put the puzzles into, and he has encoded puzzles I have only ever seen in logic magazines, some of which I have been dying to code myself.

And there is tons of fun in the wide variety of puzzles available. I just hope he keeps expanding the collection with new puzzles.