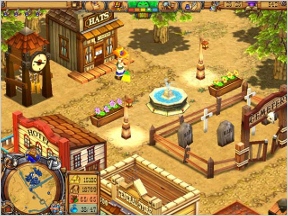 Casual sim/strategy fans (and anyone who enjoyed Virtual Villagers or My Tribe) take note: Westward III: Gold Rush has arrived! Following last spring's release of Westward II: Heroes of the Frontier, the third installment in the series continues the new 3D visual style and basic premise introduced in the second game. Take control of three new heroes as you collect resources, construct farms, saloons, granaries and more to keep your settlers happy and healthy.

Westward III is just as full of personality and every bit as challenging as previous games in the series, and so far we've been having a blast carving our way through mountains with dynamite and hunting for lost supplies in the frontier wilderness. Look for a full review this weekend, and in the meantime, fans of the series shouldn't wait to get their hands on this highly anticipated sequel!