Where's My Perry? is a brand new physics puzzle game from Disney Mobile. Utilizing the same set-up as Where's My Water?, this updated and expanded version sets things in the Phineas and Ferb universe where Perry the platypus has to work his way through underground tubes to investigate a series of mysteries (some of which may or may not involve moustaches). The catch is that the power doesn't work for these tubes, trapping Perry in booths until you can guide water to the intake valve. It's a very similar experience to Swampy wanting his bath water, but with new gameplay elements and puzzles, you'll be happy to join in on the much-improved fun! 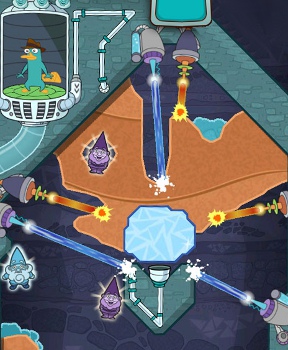 Getting the gooey liquid stuff to the power spout is a simple matter of removing soil and letting gravity do the rest. By dragging your finger across the screen, you can get rid of any amount of dirt you see fit, freeing up space for the water to flow. When the liquid gets going, it can do things like power movable blocks, set off celebratory confetti gadgets, fill and collect water gnomes you'll need to get the best score for each stage, and finally, power that transportation tube so you can move on to the next puzzle!

New in Where's My Perry? are certain Crazy-inator beams that can turn water into steam or ice. Naturally, ice sets still, often forming necessary platforms, and steam rises to the top of the screen, forcing you to invert your dirt removing strategies and come up with convoluted plans to clear a path upwards. Many of the later stages require you to convert water back and forth between states, setting up multi-stage puzzles that can take some time to wrap your head around. 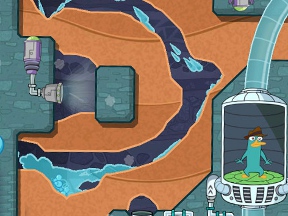 Analysis: Where's My Perry? is far from a simple re-brand of Where's My Water?. In addition to the slightly new look, a number of new gameplay elements have also been added (namely, the steam and ice beams), not to mention new levels, new cutscenes, and plenty of character cameos from the Phineas and Ferb cartoon. The re-skin doesn't really add or subtract anything from the experience, but if you're a fan of the cartoon, you'll definitely get a kick out of seeing the characters do their thing on your mobile device.

The puzzles in Where's My Perry? are simultaneously more devious than in Where's My Water? and easier to solve by accident. Staring at a level and plotting out your moves, you might think it'll be next to impossible to solve the puzzle in front of your face. That is, until you stumble across the solution without even trying. This is likely an intentional design feature due to the younger crowd that will be drawn to the cartoon rebranding. Don't think there's no challenge to Where's My Perry?, though. There are still plenty of levels and plenty of obstacles to overcome, especially if you want to shoot for collecting all of the secret folders and gnomes!

Where's My Perry? is a smartly-done redesign of an already amazing game. It keeps everything intact that made the original so perfect while adding new elements, more complex puzzles, and more stages to complete. Really, the only bad thing about the game is the slightly awkward name!

Screenshot
A collectible is marked in red in the screenshot.

Locations are marked with a red circle.

Available for Android as well:

Screenshot
A collectible is marked in red in the screenshot.

Locations are marked with a red circle.

Not as good as WMW, and much shorter, but definitely worth a try.

However I must disagree with the review statement that the puzzles are "more complex" - I've found them much more straightforward and much easier then WMW. If you've finished WMW, expect to breeze through WMP in an hour, two at the most.

The few times I've seen the Phineas and Ferb cartoon on the Disney channel, it didn't really gel with me. I'm sure it has its fans, but I just don't care for it. Somehow, though, this game has earned a place on my phone.

Maybe it's the neat way the water is animated, maybe it's how they're able to use puzzle mechanics that, let's face it, would clash with the setting in WMW. Whatever the cause, WMP gets a thumb's up.

My wife just found a secret level that isn't actually listed online anywhere! It's in the Achievements menu -- verified on both iOS and Andriod. You have to scroll down past the last achievement and tap the snowflake while you're holding the list up. It opens up a secret level called You Are Unique, with a snowflake in the middle. Go Hadley Danielson, first person to discover (or at least mention online anywhere) this Easter egg. Yay!