Once upon a time, a young man decided to go on a journey to find himself. At least, that's what the wizard tells me, but he apparently isn't a good enough wizard to afford socks, so I don't know if you should believe him or not. In any case, this young man, who you may have heard of, traveled far and wide and saw many things, such as vampire parties, dwarf battles, and flying carpets. And in Where's Waldo: The Fantastic Journey you can put your eyes to the test as you go along with him in this hidden-object adaptation of the classic books. 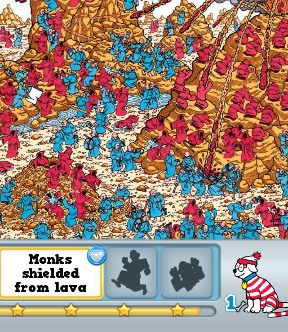 Gameplay is about as direct and simple as you can get. You're given a list of objects to find at the bottom of the screen, either with word clues or in silhouette form, and the game takes you to the area you can find them in. Initially, the idea of having the game shunt you to the location you needed to look in seemed a bit hand-hold-y, but isn't that what most HOGs do anyway? And even in chunks the size of your screen, the areas are still packed with enough detail and activity to make searching a challenge. If you had to manually scroll around the entire area the game might be more true to the spirit of the original books, but all but impossible to complete within the time constraints.

See, each stage has a timer on it represented as a bar with four stars on it. As you play, the bar slowly ticks down backwards and the stars vanish. Since you usually need at least three stars to complete a level, you'll have to move fast. Finding objects replenishes the bar, and to help you do so, you can rely on the creatively named Woof the dog to help you. If Woof has a bone, you can click on him to help you find an item by playing hot-or-cold as he barks to let you know how close you are. You only get a certain number of hints per stage, and although finding bones in each area gives you additional hints, hunting down the tiny white things on the screen will often just waste your time.

There's the occasional mini-game to play, and just because you've finished an area for the first time doesn't mean you'll see the last of it. You'll be called back to old areas to hunt down new items or people, and being bounced around the map gives your eyes a chance to refresh after staring at the same thing for so long. 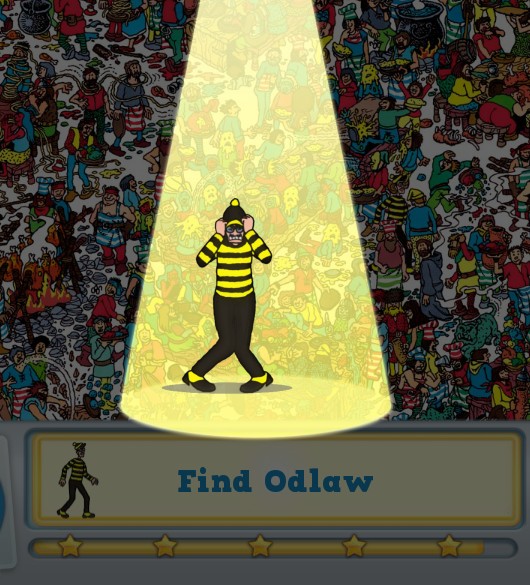 Analysis: It's a bit strange to be reviewing Where's Waldo. My initial draft was just a piece of paper with the words "It's WALDO, dummy" written on it, but apparently that wasn't "professional" enough, so, here we are. I'm just old enough to have grown up with the Waldo books, and the Eye Spy books, and consider them the original "hidden object games". Only with pages instead of pixels. Probably a good thing, since in my day, the big gray/green behemoths they called computers weren't known for their stellar graphic capabilities. The Waldo books were intensely popular when I was a wee lass, and any new volumes were hotly contested for in the school library. Parents liked them, too, although less because they were interested in the books themselves, and more because the books kept brats like myself silent and motionless for long periods of time.

The good news is that the game as a whole is of exceptionally high quality. The charm remains intact with the series' signature artwork, rendering enormously detailed scenes you may remember with tiny animations that bring them to life. Voice acting is well done, if in that exuberant "Good girl!" tone one usually reserves for talking to preschoolers, and the soundtrack is bright and bouncy for every area. There is one area, featuring a battle between red dwarfs and Asian warriors that might cause a raised eyebrow by today's standards given how the warriors are drawn, but it doesn't feel as though it was intended maliciously, so it's barely worth a ping on the offensive radar. 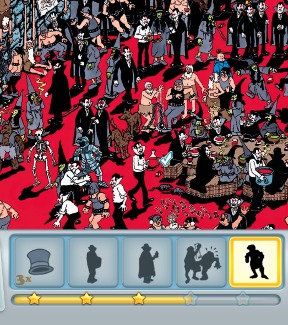 Unfortunately, the game comes with time restrictions on its levels that somewhat hinder your enjoyment. Part of Waldo's charm has always been taking your time and enjoying the details and funny little moments in each picture. Now, since you need a certain number of stars to pass each level, you're forced to rush through as quickly as you can. Admittedly, there are two difficulty levels, but the day I'm reduced to playing on "kids" mode is the day I put down the controller for soft toffees and yelling at children from the rocking chair on my front porch. You'll probably need to replay some scenarios at least once to meet the minimum score, but the game helps keep things fresh by changing the items you're looking for when you replay. In terms of difficulty, I always say that I only stop playing once the game stops being fun, and that isn't an issue I had with The Fantastic Journey. The iPhone version, however, I only recommend unless you don't have a friend who isn't willing to rub grit in your eyes while speaking in a cheerful tone of voice. At least then you'd have the same experience and save yourself the five dollars.

It's sort of gratifying to see a piece of my childhood take a step into the technological era and emerge mostly unscathed. The transition from picture book to game is an odd one to make, but Where's Waldo: The Fantastic Journey does it pretty well despite the lack of any real story. Most of its audience is probably going to be, you know, old people like myself, which is a shame since it's actually a very solid hidden object title by today's standards. Even if the game's titular character isn't familiar to you, if you enjoy the particular type of gameplay that most hidden object games offer, Where's Waldo: The Fantastic Journey is at least worth a dance with the demo. Charming and accessible for kids, but still challenging enough for adults, Waldo stands the test of time to offer a fun experience you can come back to again and again.

was called "where's wally' in the UK, and i am of the right kind of age to remember the books, but they were never as big a deal here i don't think. i was certainly never a fan.

i'm a big fan of the hidden object genre, but i have to admit i find this particular offering to be somewhat lacking.

i think this is possibly more appropriate for someone with children, where you could have the child with you playing along. or maybe those for whom it's nostalgic.

not my cup of tea, but seems well made and probably worth people trying it out with the demo.

I've got the iphone version of it, and whilst it is a nice bit of nostalgic fun, the timer to get different stars is a bit offputting, I used to spend hours just seeing what I could see as well as wally and the gang.

I'm only 15 but I remember having a Where's Waldo book only in Finnish. this thing can bring memories to the youth too :)

Wow, I remember spending afternoons, weeks even, of my childhood on this very book, searching for scrolls amid Nasty Nasties and Flying carpets. Thanks for finding this!

Another entertaining review as always, dora! Keep 'em up!

I loved those books as a kid. I still have a few Where's Waldo posters at my old room.

I actually had a Where's Waldo PC game when I was little. If I recall correctly, it was called "Wacky World Wide Games" and it had voice acting and everything and while it wasn't the same as reading the book (of course), I enjoyed it greatly, especially since there were bonus things to find and all!

I don't expect this one to be as good as the old PC game, but I'm still a bit excited to play this game, and I'm not even a huge fan of the hidden object genre of casualgames!

OH my dear lord, I just realized that "Odlaw" is "Waldo" backwards.

My inner child was just blown away.

Also Wally here in NZ. We totally had this book, so awesome.

Oh yh i just read Hollys comment and its called Where's Walley in England! Its a great game though! Its challenging, even for most adults! x