Whisper of Fear: The Cursed Doll

You and your sister haven't spoken a lot in recent years, but when your niece's health continues to decline, she decides to call you in and see if a visit from you doesn't cheer the poor tyke up. When you arrive, however, you quickly discover that there's more to your niece's health and claustrophobia, and it might be twined up in a deadly curse linked to one seriously creepy doll. A doll that nobody seems to notice or be willing to comment on frequently changes appearance to a drastic degree appear as malevolent as possible, but, alright, just go with it. And it's going to do everything it can to keep you from uncovering the truth. Whisper of Fear: The Cursed Doll by Vogat Interactive is an iOS exclusive hidden-object adventure filled with creeps, curses, puzzles, and more. Though the app is listed as "free", it's actually a demo through which you can purchase the full game after if you so desire. 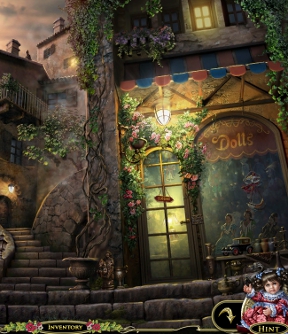 Just tap to navigate around and pick up items, where they'll be stored in your inventory at the bottom of the screen for future use. As it happens, solving this mystery and saving your niece is going to require a bit more than crawling around your sister's perplexingly puzzle-filled house (how do you even function?). The nearby town, which has a rather creepy fascination with dolls and toys in general, seems to be going through a run of bad luck where its children are concerned, and you'll need to trace the tragedy back to its roots to find out what's going on. Though you have a hint button, it occasionally just indicates interactive areas (even if those interactive areas are just bits of backstory to read), so you'll want to get into the habit of investigating everything. With your fingers. By tapping. Get your mind out of the gutter... and keep your wits about you! There's something strange and sinister happening in town and to the children, and not everyone (or everything) appreciates your prying.

Let's get this out of the way right now. Turns out playing a point-and-click game without a cursor is more of a challenge than you might think. Lacking a changing pointer to indicate interactive areas, you're sort of resigned to tapping everywhere on everything when you get stuck, especially since the hint function isn't that helpful and neither clues nor even some area transitions tucked in at odd angles are typically indicated visually. With more contextual and visual cues to help you progress, Whisper of Fear: The Cursed Doll would have been just as much of a breeze to play as its computer-born brethren, but as it stands, it's still a great mobile adventure. Vogat always places a tremendous emphasis on story and mystery, and this title is no different as you travel around the town meeting stranger and stranger characters. The actual gameplay doesn't really deviate that much from what you'd expect to find in the genre, with an added scoop of backtracking on top, but it's remarkably lengthy, engaging, and full of puzzles to solve and strange characters to talk to. Plus, it also drives home the point that dolls are inherently evil and not to be trusted, which is something we can all get behind.

Wow! I never played this but it sounds cool!