Windforge is going to blow your mind. On the surface it sounds like a garden variety Terraria or Minecraft clone with a steampunk coat of paint. Spend an hour with the game and you'll realize it's so very much more than that. Windforge is a sidescrolling role playing game that lets you build and fly an airship and craft tons of items, weapons and parts. Everything in the environment is destructible, giving you a tremendous sense of freedom and making just about every other exploration game look restrictive by comparison. 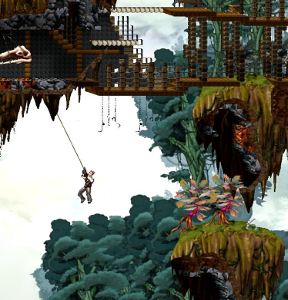 Windforge takes the familiar sandbox crafting set-up and builds an entire RPG around it. Instead of blank, freeform landscapes to walk around, you get unknown lands, secret caves, mysterious floating islands and living cities stocked with NPCs, many of whom will give you quests. The narrative focuses on a civilization attempting to find a new source of energy by researching the ancient Aetherkin. It's forbidden to look into the Aetherkin, however, so you've been hired as a secret spy/detective/mercenary/sneaky airship pilot person. Not a bad gig!

There are tons of items to craft and discover in Windforge, but a few stand out as being more useful than the rest. Drills, for example, are used to chip away at the landscape. Guns are good for shooting things. The grappling hook is a great way to catch some air. Building materials can be placed to make whatever type of shape you want, though their main use will be sprucing up your airships, which will be one of your main focuses throughout the game. There are many different engines and turrets you can find and attach, each one changing how your ship moves around the world. Just keep an eye out for Sky Whales, and whatever you do, don't make them angry!

Windforge isn't without a few faults, but the game is so engaging you'll barely notice the floaty controls or the somewhat primitive inventory system. Well, the last one you'll notice, but you honestly won't care. When a game gives you this much freedom to build, craft, shoot and fly wherever you want, details like that get rolled over in the process. Windforge is an enormously creative game that will inspire your inner adventurer to come out and play.

I can't tell from their purposely obtuse FAQ whether they plan on a Mac or Linux release. Do you guys know?

The official word on Mac/Linux builds is that it's not part of the current roadmap, although they'd like to at some point.

Hopefully it will be relatively easy to run from Linux with WINE. I got Banished running completely except for music and screen resolution, and that's a true 3d game, so I'm hoping we have luck with this as well.

I like the game except that after awhile it cause my head dizzy.. something about staggering framerate, slippery movement, and ability to zoom in and zoom out too fast. And nothing to tweak on graphic menu...