The chugging little car is back! Windosill, a 2009 release from Vector Park, creator of Acrobots, Levers, and Feed the Head, has wormed its way to the iPad, bringing with it all the dream-like levels of the original browser game. Windosill remains one of the most charming experiences any casual player could hope to stumble upon, and it's a perfect fit for the iPad and a great mobile game as well! 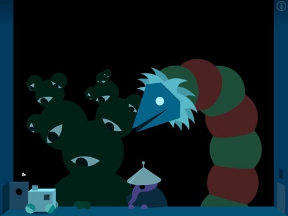 Windosill is a semi-abstract puzzle game that walks the line between interactive webtoy and full-fledged game. One day, a little toy car decides to venture beyond the shelf. It encounters all sorts of things afterwards, most of which defy a logical explanation. But in order for its journey to continue, you'll need to lend a few fingers to the cause. By tapping, touching, dragging and sliding objects on the screen, you must locate the cube on each level so you can use it to unlock the exit door.

How do you get the cube? It's different for every level, and figuring out just what you can do with everything on the screen is what Windosill is all about. The only guiding principle here is this: play around. Each object has a life of its own. Some things are bouncy, some are squishy, some are filled with air, and some like to spin. You can control the wind, the rain, knock down pyramids, make "planets" orbit, and feed a baby bird. All of this happens so organically you don't even feel like you're playing a game. You're just sort of there, looking at the screen, messing around with the things you see, and because of your curiosity, a game naturally occurs. 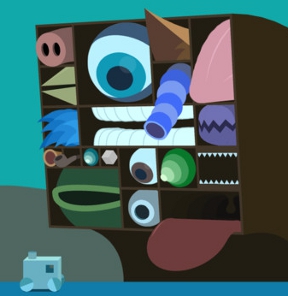 Analysis: Windosill (and the other Vector Park games, for that matter) is one of those staple releases that are good to show people who haven't been following the casual gaming scene for long. "Hey, what's a cool game I can play that doesn't involve shooting that I'll like?" "Oh, that's easy! Windosill!" And, inevitably, just about everyone who tries Windosill will become enamored by it. Pass the iPad around, if other human beings are near while you're playing, suddenly you're not the only one paying attention.

To celebrate the iPad release of Windosill, the full version of the browser game will be pay-what-you-want for a limited time!

Windosill isn't a very long game, and there are only around a dozen levels to wander through. But length or challenge aren't of any concern here. All that matters is the lush world that's there to play with and how intrigued you'll be with the objects within. And because it's there inside of a portable device armed with a touch screen, it feels more real than ever before. If you thought clicking things with a mouse was fun, just wait until you get to move the world of Windosill with your own hand.

A great game made even better by new technology. It doesn't get any cooler than that! There's even a bonus section containing concept art, giving a little inside peek into the creation of this lovely little game. Windosill is a fantastic fit for the touch screen iOS device world, and even if you're familiar with our little toy car's journey, it will be a new experience now that you can push and pull everything without a cursor getting in the way.

Play the browser version of Windosill

If, for some bizarre reason, you have never played Windosill and are in possession of an iPad then please please please get this.

It's an absolute joy.

If, of course, you have an iPad and dont want to get it then, then please could you send the iPad to me.

My only complaint is that it was very short.

The iPad version of this game is by far the best.