When Wolfgang Amadeus Mozart wrote the opera for The Marriage of Figaro in 1786, he likely had no idea how prescient and inspiring of revolution its social satire would prove to be. So prescient, in fact, that in 2014 Jean Pierre, a disenfranchised madmen hoping to gain autocratic control of France would device a machine to travel back in time to destroy the work in hopes of preventing the exposure of ideas that would lead to the French Revolution, and silencing dissent forever. Ignoring the fact that there would probably be easier ways to go about this, like maybe targeting Beaumarchais first, Wolfgang has no choice but to fight back against Jean Pierre's army with the power of music! Also, with the power of punches, kicks and limit breaks! It's Wolfgang Fights the Future, a platform beat-em-up by FlashChaz, produced on the CKP Engine. 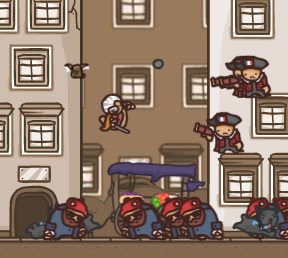 Move Wolfgang with the [arrow] keys, using [X] to jump, double-jump, and to drop down from platforms. [C] activates your basic cane-swinging attack, and [Down+C] unleashes your dash attack. Chain both kinds of attacks to get your flow going and activate "music time". Defeated enemies will spawn Florins, which can be collected to purchase potions and upgrades at the merchant stand between waves, including the Violin Limit Break that can be activated with [V] when the meter is fully charged. Please note that you have a bird friend Starling accompanying you, who will flit about the screen helping your by damaging enemies. Upgrades all your attributes to full in story mode, and the final boss fight will be triggered.

Wolfgang Fights the Future's unique silliness of premise and presentation would make it worthy of note regardless, but altogether it's a fun and frantic little brawler with a sweet amount of flow reminiscient of Chaos Faction 2-on-no-weapons-mode. While most likely the author started with the premise of "Mozart Vs. Mecha", then worked backwards to form mechanics that would make sense in that context, seeing the composer flipping and dashing and bashing stays satisfying for quite a long time, if not necessarily all the way up to the climactic final boss fight: it does come off like a 15-waves-of-enemies game in a 20-waves-of-enemies body. But with the chiptuned strains of classical music backing you up, and dozens of enemies to out-maneuver, this is one Amadeus that's sure to keep your rocking.

Anyone else have a "movie not loaded" error??? For SOME insane reason, the game stops loading, and THIS message appears on the right click menu. Could SOMEONE please explain this headache??

No, it loads ok but it´s kind of boring, so you don´t miss anything.

The review should say [X] to jump not [C]. A small point but hey it proves I read it at least !

I have to agree with kellytaylor7474,though, it is a bit samey

To whoever made this? After someone has shot at me with a 1-shot flintlock pistol he'd need to reload, which would take even an expert at least 30 seconds.

Do actual research on stuff like that next time.

Also, your AI sucks.
Their entire defence is "jump away from this guy."

I got bored on the 3rd wave of the 1st screen.
I only assume there are more screens.

Seriously...flint lock pistol reloading research!? This game is fun, it gets better as you progress. The AI makes more sense when there are over 100 baddies on the screen; it gets kind of intense. I gave up on the boss though.

I played story mode until the last level (once you unlock all upgrades).

The boss is kind of dumb, but he has so much HP it's annoying. It's easy to hit him and avoid his attacks, even with the crappy hit detection, but there is a constant risk of being hit by a stray bullet, stunned, and knocked into his very-predictable attack pattern. This is one of those times temporary invincibility after a hit would come in handy. The boss has too much HP to be killed unless you're very patient or very lucky.

The HP upgrades are basically worthless, since if you die, you start back at 100 health, and the merchant is unavailable for the upcoming wave. Once you're out of potions, you're out for good. The other upgrades are barely noticeable.

I like the little animated characters, but other than that there are very few redeemable qualities about this game.