The land of Wonderburg has been laid to waste by evil minions, and it is up to a wizard and a stalwart gnome to travel the lands putting right what has gone wrong. That is the premise of the time management strategy game Wonderburg. While it doesn't venture far beyond what games like the Build-a-lot series have established, it's a charming title that stands firmly on its own two feet. 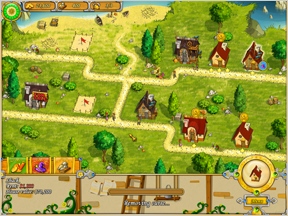 As with most building games, Wonderburg puts you in the role of the nigh-omnipotent landlord who must build and repair houses, buy and sell plots of land, and in this case, chase away pirates and exorcise spirits who haunt homes! Everything is carried out with a few simple clicks on your handy menu bar, the rest is up to the magician Alisa and Rudy, a gnome with a knack for carpentry. Keep your tenants happy and you'll be rich and successful in no time!

You can't just fling houses on the ground willy-nilly, of course. To build something, first you'll need to own a plot of land. Most levels supply a few open spaces for you to use, otherwise you'll need to clear debris or purchase lots for sale. Next, choose what type of building you want to construct and, provided you have enough gold, materials and available workers, your house will appear in just a few moments. Later levels will introduce a number of different houses and buildings that you can construct, some of which affect how you'll play the game by reducing costs, speeding up build times, or giving you a helping hand with maintenance.

In order to fix up each section of the ravaged land, you'll need to meet a number of objectives outlined in the main section of the menu bar. You may have to upgrade a certain number of houses, rake in a set amount of rent, or perform other tasks, all in the name of moving on to the next level. As you slowly work your way through each level, picking up the pieces of a destroyed land, you'll restore the kingdom of Wonderburg to it's well-built glory. 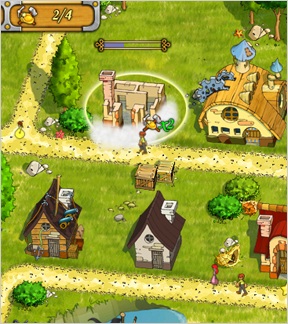 Each level also contains some sort of enemy that you must defend your houses against. Creatures such as ghostly pirates and thundering trolls will occasionally attempt to take up residence in your houses, stopping them from producing rent. It is up to your magician, Alisa, and her witchy friends to exorcise them from the buildings, turning them back to normal rent-producing structures. Again, this costs money, so be sure you have a steady income!

Analysis: While it isn't a huge step above Build-a-Lot in terms of innovation, Wonderburg stands on its own as an excellent example of a resource management strategy game. With a timed game and a more casual relaxed mode, it's playable by gamers of all skill levels. The storybook setting is nothing short of charming, and some of the animations could have been lifted from a Saturday morning cartoon. Gotta love that snoozing dragon on the title screen.

Both visuals and sound are excellent, the latter becoming very important as you enter levels with a dozen or more buildings to keep track of. Various cues for buildings falling into disrepair or houses becoming possessed will cause you to snap into action. Houses with ghosts and broken faucets don't pay rent, so you'll need to act fast! Wish that were true in real life, I swear I've seen a ghost or two around here...

The feel of Wonderburg is so similar to Build-a-Lot you find yourself wondering if they simply replaced graphics and story with witches, monsters, and medieval cottages. The mechanics of the two games are almost identical, although Wonderburg's ghostly hauntings are rather amusing. This game doesn't take itself as seriously as others in the genre, and as a result, you won't take it as seriously, either. In other words, we're just here to have some fun, build some houses, and chase away pirates, trolls and ghosts.

It's not a new page in the resource management book, but it's certainly a well-illustrated and charming addition. Grab your hammer and magic wand and give Wonderburg a try.

The walkthrough was written while i played through relaxed mode, however using my methods, the longest level only took me 15 minutes, so I'm sure it will work for timed mode too :) If you notice any mistakes let me know at Kero (at) Casualgameplay (dot) com. :D

The walkthrough was written while i played through relaxed mode, however using my methods, the longest level only took me 15 minutes, so I'm sure it will work for timed mode too :) If you notice any mistakes let me know at Kero (at) Casualgameplay (dot) com. :D

This looks so cute/fun! I hope it comes for Mac soon..

Good game, but... 1 or 2 levels from the end it errored out and crashed. When I restarted, all my progress was lost.

The game is good enough that I will replay through it again. I actually think I prefer this over build-a-lot t'be honest.

I can't seem to get the "use ghost spell" to become available. Help me please!