If you've roamed around these parts long enough, you might've stumbled across a little oddity called You Don't Know Jack. Based on the popular CD-ROM game series, tabletop game, and short-lived network game show, You Don't Know Jack was a snappy online trivia challenge that seamlessly "combined high culture with pop culture". After months of daily DisOrDats and one hundred full episodes, Jellyvision ended their online service with a surprisingly heart-warming message delivered by Cookie Masterson himself, saying that You Don't Know Jack might return sometime in the future.

Well, folks... JACK. IS. BACK. (That's best if read with a deep movie announcer voice. But since dinosaurs make things even better, who would be best to read that line? Answer below.) 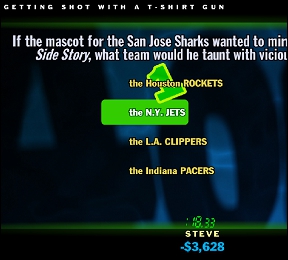 For the most part, YDKJ is played as a straight-forward multiple-choice quiz, or at least as straight-forward as a quiz can be when you're comparing I Can't Believe It's Not Butter to the Kübler-Ross "five stages of grief" model. After the question and choices appear on the screen, use the [1234] keys to select your answer ([7890] for player two). The faster you answer, the more cash you'll earn if you're right, or lose if you're wrong.

Special themed categories, such as "Who's the Dummy," "Weird Trash," and the "It's The Put The Choices Into Order Then Buzz In And See If You Are Right Question" add some variety to the mix, along with the famous DisOrDats, where you've got to decide which categories answers belong to in quick succession. After two rounds of five questions, it's off to the dreaded Jack Attack, a knee-jerk reaction game of word association, where a close game can be won or blown in a matter of seconds.

In a Jack tradition, multiplayer games also give players the option to "screw" their opponents. If you think the other player doesn't have a clue about a question, hit your screw button ([Q] for player one, [P] for player two). They'll then have five seconds to work out the answer. If they're wrong, you can nick a ton of cash off of them, and still answer the question yourself for more money. But if they're right, your opponent steals the cash from you! It's a clever strategic twist that can turn a game around if played well. 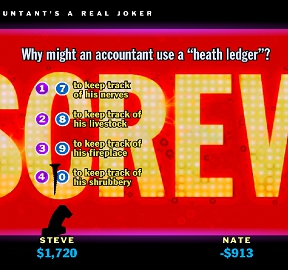 Analysis: As you've probably gathered by now, You Don't Know Jack is far from your typical game of Jeopardy! (robot contestants or not). When you find yourself combining string theory with Cat's Cradle, or fast food with modern art, you find the game is way brainier than it claims to be, in that lateral thinking sort of way. Who knows, you might even learn something. And as your bankroll gets bigger, your bald head must flower! It's great to learn...

...Because wrong answers come with pretty sharp penalties. Along with sacrificing some samolians, host Cookie Masterson will berate your every mistake. (You might even catch flak for winning, so everyone's fair game.) But if you're lucky enough to find the Wrong Answer of the Game, you can score big bucks and a faaaaan-tastic prize from the sponsor!

One downside to the Steam release of You Don't Know Jack is that due to technical restrictions, you're limited to one- or two-player games, as compared to console versions that allow three- or four-player games, and even online network play. For a game that's ideal for party play, being limited to two players or teams is a bit of a bummer. Still, it's an excellent game to play with a friend that you can laugh with. (Or at.) Also, there appears to be DLC to be available at a later date; there's no word yet (as far as I know) whether it'll be available on Steam, or if it'll be free or paid content, but no one's ever complained about too much Jack, right? (Here's a good spot to slip in a trivia question about Ke$ha if you've got one.)

It would be somewhat irresponsible to recommend this game to anyone without mentioning that there is a thread of some lewd humor running through the proceedings. On the other hand, in probably the most confusing statement of this whole review, YDKJ is very tastefully lewd. Let me put it this way: Yes, there are dirty jokes that will pop up every now and again, that's practically unavoidable. And if you're easily offended by cheap insults hurled at you by a computer, you'd better get every question right or stay away from this game. However, Rather than flinging poop jokes everywhere, the entire production is still very tactful, using the "your mum" references sparingly.

This release of You Don't Know Jack is everything you'd expect from the classic franchise, from fast-paced humor to outlandish and challenging questions. Apropos of nothing, the answer to the above question was Mastadon LaFontaine. Naturally. Hungry for more? The Jack awaits.

Note: You Don't Know Jack is available on a number of platforms, including handheld and console gaming systems. The PC version is reviewed here.

I love this series back in the 90s. It seems to be making a comeback, but I think it falls a little short. I know the computer version is trying to blend with the consoles version, but its losing a lot of fans because of it. The days of Gibberish Questions, Anagram Questions, Fiber Optic Field Trip, and more has been taken off, leaving DisorDat and the infamous JACK ATTACK. I hope they vamp up for the next version or I will still be playing The Ride or YDKJ XXXL

This is much better on X360/PS3 due to having 4 players locally. Online play is hit-or-miss ("Answer Farmers" have already shown up online), and in 2 players, you don't get enough misses.

One bit of strategy with the Wrong Answer Of The Game: whenever a person is screwed and picks a wrong answer (even THE wrong answer of the game), it is removed from play and the person who initiated the screw takes the standard bonus for screwing another player from the victim. If the player being screwed picks the wrong answer of the game, NOBODY CAN GET THE $4000 ($8000 in round 2) FOR PICKING IT. This is explicitly noted in the manual.

@Remister: They had to take out the text-input questions since they don't fit well with the consoles (which, unfortunately, leads to answer-farmers button-mashing the answers ahead of time since they don't change). Even still, there's still a handful of gimmick questions in there.

Here's the list of standard gimmick questions actually labeled as such:

DisOrDat (Always 1st round, usually question 4): 7 items, you have to pick whether it's one category, a different category, or (in some cases) both. In local MP (NOT online), other players can attempt to steal from the active player if the active player misses. Scoring is +/-300 per answer + a time bonus of $1 per 100th of a second left on the clock to the active player, with stolen losses being divided among the secondary players that got it right (300, 150, or 100).

Who's The Dummy?: Try to correctly interpret a question and answer set with some letters swapped for other letters (T->D, M->N, etc.). The letters changed are the same in every case.

Funky Trash: Guess the character based off the trash.

It's The Put The Choices Into Order Then Buzz In And See If You Are Right Question: Correctly answer with the order the items should be in. 1,000 is added on top of the usual score if you get it right.

Nocturnal Admissions: Guess the movie based off the dream Cookie had. Don't mind the two cats and Cookie's mom.

Heh--this review apparently re-affirmed the reasons a friend of mine who likes the game series is getting the console version rather than the Steam one. Personally, I can maybe understand limiting the local multiplayer (did previous Jack releases have it, though?), but why in blazes cut online multiplayer? Steam is pretty much *designed* for that sort of thing.

I LOVE THIS GAME!

I have it on PS3 and it's lovely. Drunken YDKJ parties galore! :D

Oh man, I remember this fondly... I still have

"Black jack, heart attack, do you nightmare when you dream? Are you feeling lucky? It's question thirteen."

going through my head much more regularly than I'd like to admit.

Chris: I can't claim to be a tremendous connoisseur of the YDKJ series, but I think that in most of the previous PC installments, more players were allowed (up to 3 in most cases, I think), but the buzz-in system was different. Rather than everybody taking a guess at every question like in this version, older versions usually had lock-out buzzers that only let the first person answer (Jeopardy!-style). So having only two players is a step down from past editions, but also a sideways step since everyone has a chance to get in the game, even if they're slow on the buzzer.

As for the lack of online multiplayer, I haven't the foggiest idea.

I don't suppose there's still a way to play the free online episodes?

I know they stopped making them a while ago, but I don't see the harm in still having them to play?

6,636 Views
18 Comments
chrpa— Jayisgames needs your help to continue providing quality content. Click for details Hi, it's the time for a Christmas special and it's here... ...and it's very plain, I'm sorry. There just aren't new Christmas games out - Flash games...  ...

3,031 Views
0 Comments
jayisgames.com— If you are a gamer or have done gaming in the past, most certainly you would have come across the word Auto Clicker. What is that tool? What are its features? What are its advantages? We will discuss each aspect...  ...