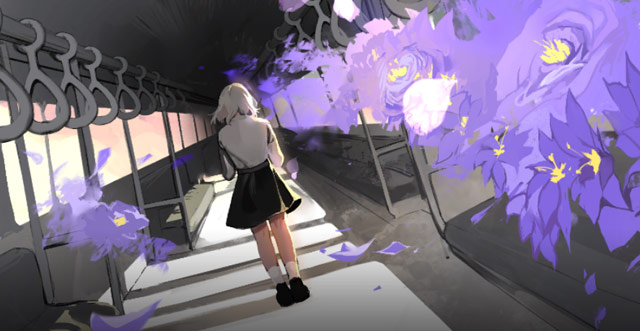 Last fall, I wrote about beautifully rendered, short point-n-click game accompanied by a suitably haunting soundtrack from Zephyo, I Woke Up Next to You Again. Since then she's published many others, most recently a game in a similar vein of style with a slightly more exploration-based feeling to it. Much like the previous title we reviewed here, You Left Me deals with a difficult topic with splashes of color amongst the melancholy, contrasting warmth with crushing sadness. To set the scene, you wake up in another world you do not recognize, with nothing but your bed floating up in space, the moon looming large in the sky above you, a most unusual feline friend by your side, and oh yeah, a fridge floating nearby because why not?

Having arrived in your apparent vision of surrealism sprung to life, your thoughts drift wildly. You see something resembling a clock on the moon, counting down: it's not clear what will happen when the countdown strikes zero. Something tugging at your sides hints to you that it won't be a good thing, and that you have to escape this world before the countdown reaches zero. But at the same time, you're also enchanted by it, and driven by curiosity to explore more of it before you depart. There's a cyclopean cat with one eye positioned perfectly in the middle of his head beside you. What's he doing here, and what can he tell you?

Only in the wonderfully surreal world of dreams can a cat talk to you, but even more surprising, you find that the moon above can hold some conversation as well. Mostly, though, it tells the worst kind of jokes. How do you round up 37 sheep? Round to 40. What class did Karl Marx struggle with the most? The bourgeois. When you're done (not) being amused by the relentless assault on good humor, you can check out the other things in this dark, mysterious world.

But even as you try your best to concentrate on something, you can feel the simplest of tasks slipping away through your fingers. Trying to read a simple phrase out of magnets is immensely difficult with the weight of something you can't quite ascertain crushing you. Do you keep pressing on to try and make out the dancing letters in front of your face are telling you, or move on and decide it's just not a worthwhile use of your limited time here? You get up to leave the bed and nominally a world of possibilities springs to life in front of you. Maybe a bus ride through the streets will help to jog your failing memory. Maybe there are other people that you could ask for help?

You Left Me is on the short side as far as playthrough time might go, but certainly achieves a much greater depth emotionally. Zeypho explores a world disassociated from our own in name, but that cannot help but be tethered back through its symbolism and its similarities. When the world is pressuring you to fit the mold and surrender individuality...when others pay no heed to the cracked mask behind which you try to conceal your emotions...when everything inside you is telling you that you need to escape, to get out now - maybe what you really need is to think what the one person who can no longer help you would advise.

One of my favorite parts of You Left Me is the music. Much like I Woke Up Next to You Again, the score sets the mood, this time with three different tracks in different parts of the game. The tracks seem to perfectly compliment the aesthetic flair as you gaze out and explore everything around you. It's also a nice touch how the illustrations shift and change slightly with mouse movement, illuminating a little more of the world as you lock around. There's honestly not much I would offer up in terms of constructive criticism - there are a few minor technical bugs but nothing unexpected when working within the time constraints of Ludum Dare.

The controls for You Left Me are the usual fare: point and click! Click on different objects you see on the screen to interact with them, which will prompt dialogue text to appear in white at the bottom of the screen, or at times a menu of options on the right-hand side. You will see a large white dot when you hover over something that you can interact with. If certain options are not available - usually due to not having unlocked them through various triggers in the game - they will be greyed out, along with some of the characters being intentionally missing and distorted. Some paths will not be available straight away and will require multiple playthroughs to unlock. In the settings, you can adjust the volume for sound effects and music, as well as text speed and visual quality. You can also delete all the data if you want to start the adventure with a completely fresh sense of adventure.

There are five endings to You Left Me, although there is overlap in some sense as some are different versions of the same concept. In any case, it's pretty clear which one Zephyo intends as the true ending. Which one you will find will ultimately, I think, say a little about who you are and what you value as a person - come for a short stay in this world, and leave a little heavier provoked with thought.

Note: This game deals with difficult themes and may not be suitable for all audiences. I won't say more for the sake of spoilers but you can see the game description from the link below if you would like further information.

Play You Left Me