In the first Youda Survivor, your job as a ragged castaway was to impress the chief of the island by brewing potions and living off of the magic of the world around you. Prove you were the stuff of legend, and you would be rewarded! After saving both the island and its inhabitants, you settled down for a nice and quiet civilized life of your own. But as Youda Survivor 2 begins, the island chief calls you back, and it looks like some serious trouble is brewing this time around! 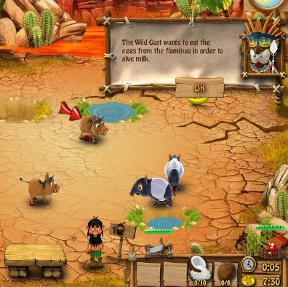 The mechanics in the time management game Youda Survivor 2 are just about the same as in the original. Both titles resemble Farm Frenzy in design, which certainly isn't a bad thing. Levels generally start out with very little to work with, and it's your job to build things from the ground up. Start with digging holes to create water pits that attract animals. Then, other animals might be drawn by the products those animals leave behind (goats want to eat flamingo eggs, for example). Each animal leaves something you can collect. Gather what you need to meet the goals listed at the bottom of the screen!

Caring for animals, gathering their products, and fending off bad guys with your fierce cursor aren't your only concerns. In Youda Survivor 2, you also have to pay attention to your health. Strength and hydration are shown in the top corner of the screen, and they slowly deplete as time goes by. You can keep your hearts full by brewing certain potions, and often you'll need to have a certain number of hearts to beat a level. Strength also serves as a meter for using rituals, special abilities you can activate that do cool things like summon rainstorms. If your water or health bars drop to zero, you lose the level, so keep a constant eye on them!

Branching paths in Youda Survivor's map creates a nice open-ended feel to the game. You can go in either direction you please, but often you'll need certain upgrades before you proceed, so you might need to backtrack to earn more points so you can visit the shop. There are also a number of achievements to strive for (ten pages of them, in fact!), and since you'll be spending many hours of your time working through and perfecting over 100 levels, earning trophies should be a snap! 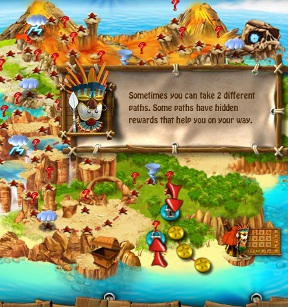 Analysis: Every bit as content-rich and entertaining as its cousin, Youda Survivor 2 is another excellent time management game from the crew at Youda Games. The mixture of time management styles with a bit of simulation thrown in (with the strength/hydration management) is carefully balanced, so you're never too overwhelmed with either aspect. And mixing potions from recipes feels a lot like one of my favorite time management games, Miriel the Magical Merchant (P.S. I heart you MythPeople!).

Story is pretty much unimportant in a game like this, so you can safely forget why you're playing and what you're trying to do. The cheese factor is unfortunately high, so you'll need to swallow a few quirky plot points and tolerate some stiff 3D models throughout the game, but it's nothing that really detracts from the experience. We'll call it "charm" and keep clicking away at those flamingo eggs, bottles of milk, and pirates with shields.

As for differentiating itself from its predecessor, Youda Survivor 2 doesn't try so hard. It's largely the same as the original game, a fact many could argue isn't a bad thing. If you played and loved the original and want more, hop right in. If you're new to the series, hop right in, too!

There's a lot to love about this game, and thanks to its impressive length (and variety of locations), you'll spend six, eight, or more hours working through the levels and going back to master each one. The gameplay is nigh perfectly balanced, what with the branching map paths, careful upgrade system, and introduction of new elements every few stages. In short, Youda Survivor 2 is more Youda Survivor from the proven time management experts at Youda Games. You'll have a great time with it!

When the pirates blow their horns and lock up one of your machines, how do you unlock it?

When the pirates blow their horns and lock up one of your machines, how do you unlock it?

You must re-buy the machine again. It usually only cost between 50 and 150, but watch the sign, and you'll notice a new price on it.

In order to earn every achievment possible you must complete the very first level in 10 seconds. No matter what I try, I can't seem to get those birds to lay 2 eggs in 10 seconds or less. Has anyone out there done it? If so, how??? Any clue appreciated!

you have to start by digging the hole, and let the time stop the moment the birth arrives, than you use rain and dig the second hole, with will attract a second birth. Than use the singing ritual and fast take both egg's

On level 9.4 The Last Stand, how do you keep from being killed by the siege? I've tried everything I can think of. Thanks so much!

I don't get this.... on the very first game, nothing I click on makes anything happen. I cannot dig the hole, cannot even get the menu to come back up. The only way to restart is to leave the screen, go out to another program, and then return to restart. What am I doing wrong?