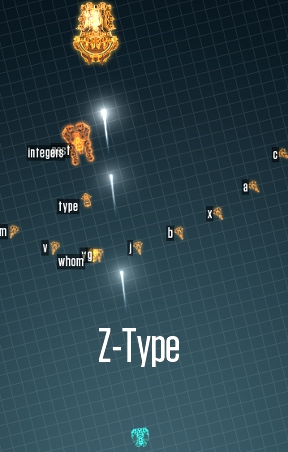 Well, it's over. It's all over. The aliens have been monitoring our chat rooms and our text messages, and they know our weakness; proper spelling. Or at least, proper typing capabilities. If you want to survive in Dominic Szablewski's arcade shooter game Z-Type, you'll have to leave the 1337 speak at home if you don't want the aliens to pwn your ship. (People still pwn, right? Kids these days.) The menu screen tells you all you really need to know; type to shoot. Enemies fly in from the top of the screen with a word in front of them; type that word as fast as you can to blow them to smithereens. Don't let them reach you or all the contrived movie plot devices in the world won't save you from the Game Over screen. (Where's Jeff Goldblum when you really need him?)

If Z-Type appears to be a fairly simple game, well... that's 'cause it is. You'll encounter more enemy types as the game progresses, but the method of dealing with them always stays the same. There is some strategy involved; certain types of enemies will need to be dealt with first unless you feel like frantically trying to deal with dozens of tiny spawned ships making a beeline straight for you. While it does take a while for the difficulty to really ramp up, the longer you last the more the game starts to resemble a good ol' fashioned bullet-hell shoot-em-up.

While there's no denying it needs a bit more variety to its gameplay to really elevate it beyond a simple diversion, what exists is still a remarkably pretty and well designed example of HTML 5—developed with Dominic's own custom HTML5 game engine, Impact—put to good use and has loads of potential. I'd love to see an expansion on this in the future; maybe something where different words corresponded to different power-ups, or at least had some sort of affect on the action, or maybe even told a story. (Am I optimistic or what?) At the end of the game (which is basically however long your fingers hold out) you'll be presented with a screen that tells you how well you did. If you're a halfway decent typist you'll probably last a good long while, especially since there's no real penalty for typos. Addicting and cleanly designed, Z-Type is the perfect little time waster if you want to pretend you're being productive, too. Hey, you're not just playing games, you're practicing your typing skills! That's totally like work and stuff. Go on, have a cookie. You earned it.

Holy crap, how long does it take for this to happen? I played this until level 25, and I was still killing all the baddies at the top of the screen. I just closed it after that. Do I have to wait 'til level 125 before it gives me a challenge?

[Probably for you, Simone, yes. I suspect you are an expert typist. -Jay]

Reminds me of playing a cut-down version of "Typing of the Dead".

I too would like to fast forward to a level that is remotely challenging.

Odd. When playing this game, the music came from my laptop's speakers, and not the headphones I have plugged in. It does this for all sound *until the game window is closed*.
Anyone else have this problem?

@Simone - Same problem here. I type about 85 wpm and it took a while for the game to get challenging. Odd note - sometimes when I hop from one word to the next, the game would start me on a word that just showed up, instead of the word I was trying to shoot.

At least it's a more interesting form of typing practice than copying from an old practice manual.

Fun, but definitely a slow difficulty curve. I had my first shot taken at me on level 31, but only because the stupid Automatic Updates box popped up while playing. After that, I breezed through level 36 or so and just got tired and quit. I was picking off ships at the top of the screen and it didn't look like they were gonna speed up any time soon. I would have liked it more if you could select a level to start at or if the word would reset or deselect if you mistyped a letter. Or if there was some sort of adaptive gameplay that increased speed and population for fast typists.

On a completely side note, a local arcade has The Typing of the Dead arcade, but it's the Japanese version, so unless you can read and type Kanji, you can't play. At least not the actual real game part. There is a tutorial mode that has an English option.

This is a fun typing game with the added feature of having to choose which critters to destroy first. I agree that there should be some way of getting to the harder levels more direclty.

I was beating the levels easily and then I failed around level 25 when I couldn't spot the red word that it wanted me to finish. It would be great to start again around there and keep playing. But I can't bring myself to start at level 1 again. Maybe tomorrow.

@Simone: It's true, I'm at level 45 and the difficulty difference between levels is infinitesimal. I like the feel of it but it's simply too easy, and I'm no expert typist.

Managed to clear fifty-something waves before Firefox crashed on me.

I actually find this game kind of relaxing.

Firefox crashed on me, too, circa level 50.

FYI if you're curious about this, just view the page source and download some files, and take a peek.

Yes, I too found it way too easy. I got to level 15 and no ships ever dipped below the top. I code for a living, so I type every single day for hours. I was hoping for a challenge.

This looks fun, but it's severely lagging on me.

I couldn't really enjoy this game for the challenge, as my dad made me learn to touch-type (fast) when I was seven.

I'm fourteen now, and I finished wave 26 and then quit because it had gotten boring.

It was a beautiful game -- the glowing effects were really cool, and I actually liked the gameplay, but the ships moved so damn slow!

For those looking for a bigger challenge, Dominic had this to say on his blog:

I can't currently make any changes to the game itself right now, because of the Game On contest rules. I will put together a new version of the game sometime soon after the contest ends.

Couldn't get past Wave 6 because the first time Chrome crashed and the second time I pressed backspace by mistake (back to previous page...).

Huh, mine crashed at level 50 too. The bits between levels 30 and 50 were pretty exciting and fun. Based on how much my wrists hurt after 50 levels, maybe crashing at that point isn't a bug but a safety feature...

So did any 31337 player get to the point the game got too fast (not crashing and not getting bored)?

3,591 Views
1 Comment
PeterR— Perfect Tower 2 is a Frankenstein's monster of a game (in a good way). It is part tower defense, part idle game, and part management sim. It's an ambitious sequel to the original Perfect Tower, developed by Fire Sword Studios....  ...

2,207 Views
0 Comments
chrpa— Jayisgames really needs your help to continue providing quality content. Click for details All three games featured this week are not demanding platformers; the puzzle and strategic elements in all three are more important. The first game by Robert...  ...

Review of Nova Drift + a Q&A with the Developer!

2,542 Views
1 Comment
PeterR— Check out our review of the new roguelike/shooter, Nova Drift + and exclusive Q+A with the developer!  ...