Save the world from a zombie head invasion in this turn based match-3 defense game mash up from Shovelware games. In Zombie Match Defense swipe any brain left, right, up, or down (but not diagonal) to match three of the same type. In most cases you can even move a brain with a zombie on it. When you make a match with a zombie included, the monster dies its final death and humanity lives to see another day. If a zombie reaches one of your scientists, she or he goes out fighting and humanity is basically done for because if another zombie makes it through the empty door it's game over. 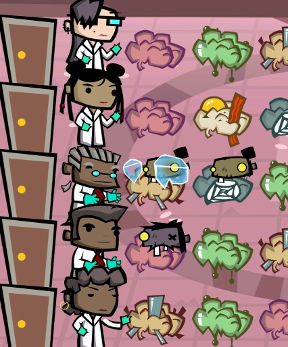 Once you master the basics, the game starts throwing you some extras that both help and hurt. Regular zombies just jump forward one space each turn, and are killed with one match. But other zombies are better protected, or move erratically making things more difficult. However, after each game you earn zombucks used by r&d to come up with some defensive items for your scientists to use. Okay r&d is really this weird guy who sells to you out of his food truck, but the end result is the same. He sells you items you can equip that give you bonuses based on what type of match you make. If you match four instead of three, for example, you can get an ice cold drink that will freeze a zombie in place for one turn, or if you match five you can equip a scientist with a shot gun. These items can eventually be upgraded further and even combined to make more powerful items, thus prolonging your survival. It's no use saving your items for too long, as you can only hold three and any you may gain when your slots are full are lost instead. There are three stars you can try for on each level, and an endless mode to unlock, which also gives you access to unlocking different scientists you can use. Zombie Match Defense has a good blend of skill and luck, has a great art style, and will keep you entertained for hours.