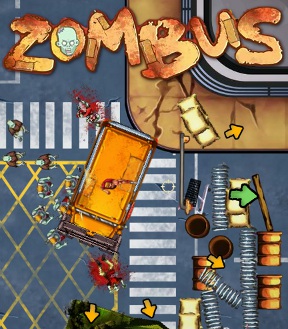 Zombies are everywhere. And all you've got is a heavily armored bus that can be upgraded with shields, zombie-crunching bumpers, guns, and other equipment! Guess you'll have to do some reckless driving in order to rescue the survivors. Zombus is a top-down driving game from Game Launch Project, creator of Bunny Flags. The game features loads of blood, plenty of angry zombies, and a healthy dose of more blood. But, for a browser-based driving game, you'll be surprised how spot-on the controls (and overall sense of dread) are!

The last survivors of the human race are holed up in tiny safe houses scattered throughout the city. With your crafty little school bus, it's your job to drive around and rescue them, fending off hordes of zombies in the process. Your main weapon of choice is momentum and a strong bumper, as zombies are surprisingly vulnerable to being hit by 20 ton vehicle. Squash the baddies that chase after your bus with a good swipe, using the [WASD] keys to steer and pick up speed.

What kind of self-respecting zombie apocalypse survivor heroes would try to save people without some sort of weaponry? Zombus includes an upgrades store that allows you to equip guns, bus upgrades, and more by assigning them spots using a limited number of points. You can equip things like stronger bumpers, shields, and various types of roof-mounted guns that are used for, naturally, mowing down zombies that escape your wild driving techniques.

Analysis: Level design in Zombus is one of the game's many strong points, as it's rather open-ended and allows you to take on tasks as you feel brave enough to do them. You start off on a piece of road with arrows pointing in multiple directions. Yellow arrows tell you where survivors are, while the green arrow tells you where the end of level safe zone resides. Pick up survivors for more points and awards, as long as you get to the goal, you'll be fine. The roadways aren't straightforward, so sometimes you'll have to do some creative driving and backtracking in order to make it through.

Another design success are the controls and general feeling of driving the bus. Controlling a massive vehicle is rarely represented with any semblance of accuracy, but Zombus obviously tries, as moving the huge hunk of metal feels like it's an effort, even though all you're doing is pressing a button on a keyboard. Turning, slowing, smashing into cold zombie bodies all comes across as very visceral, which is something you rarely see in a casual browser game.

Zombus gives away a lot of great gameplay for a simple click of the mouse. With its upgrades you're allowed to customize things to suit your playing style, and with the difficulty level slowly increased you're challenged just enough to make you want to continue. Couple that with some excellent visuals and the always-popular zombie theme and you've got a great action game that will hook you right from the start.

If you type an M while entering your name, it toggles Mute on and off. :D

Trying to steer with my left while shooting with my right was just too hard for me : ( I tried switching to arcade mode, but it didn't help.

Also, it's easy to click off the screen and hit a pop-up ad. HATE THAT

Still, it was fun mashing zombies for a bit. Hard to go too wrong there.

Oi! Would be an awesome game if the controls weren't so awkward. Gave up despite satisfying 'splat' of zombies on the pavement.

i found it difficult to play, i couldn't steer the bus well, haha, enjoyed a little bit ..