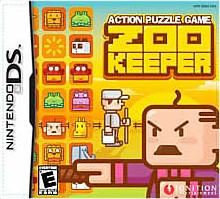 IGN DS has up today an article about Zoo Keeper DS, announcing that it will be released for the Nintendo DS within the official "launch window" for North America. What that means is the game will be available sometime in December.

If you are wondering why I may be interested in Zoo Keeper, besides the fact that I am waiting patiently for my preordered DS to arrive sometime in the next few days, answers to those questions may be found right here on this site. Zoo Keeper can be played right now, today, with Shockwave and a browser. Click.

What other Shockwave or Flash games would you like to see turn up on the Nintendo DS?

I dont really like Zoo Keeper that much. I mean it has nice graphics and sounds are good, but its still just a Bejeweled clone. I think Jewel Quest has added much more to the same old idea.

I wish any new gadget like Nintendo DS would include Flash/Shockwave player and ability to load new games from the web much like the mobile phones do with java games.

Tony, I've never played Bejeweled, but I can see your point if it doesn't offer anything more. What got me hooked with Zoo Keeper is the fact that it is done in Shockwave, and therefore doesn't require the 2+ minutes to load as most Java games do for me.

And yes, I agree with you that a Shockwave and Flash player for the Nintendo DS would be excellent, especially if there were a seamless translation between mouse movement and stylus position on the touch screen. It is a very exciting possibility.

I sort of like ZooKeeper, but it is indeed -- very much so -- a derivative game. Variations of this theme have existed many times over in the past, and I just don't think it will translate to a full DS game very well. It'd get boring quick.

Mr. Driller (and not that lame clone that you linked a while ago :) will be a definite purchase from me.

As an aside, I'd love to see a PS2 version of Alien Hominid... oh wait!

Ah yes, who can forget Alien Hominid, another Flash-turned-console game.

Like Tony mentioned initially, I see a tremendous opportunity for developers to try out their game concepts in Flash, then port the successful ones over to a Flash-friendly console, all shrink-wrapped and ready for the masses.

How about an Orisinal game collection for the DS? Ferry are you listening? =)

I see big difference between Flash games in the web and console games. First is the fact that most Flash games are free, unlike console games (I could be wrong, but I think no console has hundreds of free games, does it?). When people pay for something, they expect quite a lot more then for something they get free. And to be honest, I havent seen many Flash games I would be willing to pay for. Its not that good games cant be done with Flash, but more about how much time and money is spent on the development. Have you heard about any Flash game, developed by 100 people over 3 years and 50 million USD? For major console game thats possible, but for Flash game...

The other major difference are potential players. For the console market I still think its the boys thing at the age group of 10-18, who are willing to play same game for hours. In the other hand, Flash games on the web have certainly more mature players and even more female players. Take the huge success of puzzle/word/casino type of games in the web. Also the web games players are more of "play for 10 minutes during the break" and they dont have time to spend hours on same game.

Nice discussion, Tony. I agree with you that there is a definite difference in production values between Flash and console games, and there is likely to be a difference in audience as well.

With that said, there are a couple of similarities I see. When you reduce a game to its core, what you have is its gameplay and entertainment value. Both types of games have these essential components, regardless of the amount of money that was put into them. If a game is fun to play, even if it was designed and produced by a 17 year old kid after school, people will play it.

Likewise, anyone can make a game without those elements that no one is likely to play, even the large console publishers. Great graphics without gameplay will quickly end up in the recycle bin.

The exciting thing for me to see is all the great things that are being done with Flash these days, and I am optimistic about the prospects the future holds for independent game developers. I believe that with tools such as Flash, there is a whole new community of game developers who are able to get their ideas realized both quickly and cheaply.

And I would definitely pay money for a compilation of Ferry Halim's Orisinal games were they to come out for the Nintendo DS.

I basically agree with you that you can see more interesting new ideas in the Flash games then in the games published by the big studios. Maybe it is exactly because Flash games are cheap and easy to make and the big studios are very-very afraid to lose their invested money in something new and strange. Not that I think they are making loads with all the FPS, RTS and rally clones we see every day, but they know each type has pretty solid player base, willing to spend at least some cash even if the games biggest news is "realistic water effect" or "120 new types of guns".

Next is probably completely off-topic. I was reading an interview with Will Wright, the man behind all time best selling game "The Sims" and something he said made me think:
"The Sims is hugely successful game thats spawned virtually no clones. While Doom, C&C and even Sim City birthed genres, The Sims continues its lonely vigil."

Surely I dont think game like The Sims is easy to create and it probably takes huge company like EA to make it great, but still, some kind of clone is more then possible in Flash too. Yet, I dont see anyone even trying. All the time I see people saying they want to make RPG, GTA, Street Fighter or at least Tetris. Surely those are not easier.

I think the notion of wanting to make only games we like is mostly true. In other words, why would someone want to make a game they didn't like?

When I play a game that excites me and sparks my imagination, with it comes lots of ideas about how to make the game different or better. I believe I am like a lot of people out there that given the tools to create their own games, the result would be a game based on an idea they have seen or played that inspired them creatively.

Another point worth mentioning is that a basic skill set is required to create good games including collision detection, AI, physics, etc. By building a familiar game concept, someone new to game development can focus on learning those skills rather than on everything at once.

And that brings to mind the topic of recreating classic games that Tony asked me to cover in an entry all its own. Briefly, I believe that using classic game intellectual property for such an educational purpose is quite acceptable. The problem is when the result is then offered to the masses for play, which could violate the rights of the owner of the IP. When a game developer can create a classic game that rivals the original version, it's time for that developer to move on to create intellectual property of his or her own.

Beside making games only for yourself as a fun hobby, you could also make games as a job. And for any game including more then 3 people to create, I would think they dont all exactly "like" very much the game itself, they just get paid for doing their job and as long they do it well, its all fine.

I dont think many companies do Flash games all day long, but those who do, make the games they are payed for. Ad-games, promos, or what they are called, are good for the income, but they suffer usually from same old boring lack of ideas. Which can be understood, its much more easier to explain to the client how his "pacman with the coca-cola drinks" will look and play, then say to the man with money "I have this very nice idea about the game never done before and nobody knows if it works, but will you pay for it anyway".

As for recreating the classics, I was mainly wondering about two things. First, whats the point of carefully recreating the game exactly same as it was done once? I can understand taking some ideas from it, adding some new, changing and tweaking it so it reminds oldie, but is actually something different. But making exact copy of it? Exercise of programming?

Second, I am not sure about the copyrights. Surely you shouldnt sell the remake (which game industry itself does all the time, even the zoo keeper is only remake), but if someone makes classic game and puts it in the web for free, how can it be bad thing? Game is played, players are happy, even author of original game doesnt lose anything since nobody buys his Spectrum64 or Atari game these days anyway. Is it all about waiting to sue someone and earn millions? Waiting for big studio to walk in with cash to buy his rights?

Excellent points about making Flash games for a boss or a client. I agree that is probably why we see a lot of clones of existing games.

And for recreating a classic game, as I mentioned before, it is often easier for a new programmer to take an existing idea and try to recreate its behavior, learning how to implement each element along the way. Starting off with an entirely new idea, while certainly not impossible, may prove to be extremely difficult without prior game development experience.

And as for copyrights, the reason copyright exists is to protect the financial interests of the owner. If someone were to recreates a classic game exactly, then give it away for free, don't you think that it might affect the original copyright holder from making money on his design in the future? If the answer to that question is "Yes", then copyright has been infringed.