So the kingdom of Avalon has managed to repel the goblin invaders, but was nearly razed to the ground in the process, and now the king gathers his knights to march into the mountain and slay the goblin king to end the threat once and for all. While you stay behind and do all the grunt work, of course. In Anawiki's casual card game Avalon Legends Solitaire 2, you're a druid who's been left holding the bag while the king is off being heroic, and in that bag is a deck of magical cards that allows you to gather the resources needed to rebuild the kingdom when you play solitaire... ssssssssssomehow. Look, it's magic, kid, I ain't gotta explain anything. With the help of the townsfolk who will generate income and resources for you as you rebuild the kingdom, and your extremely passive-aggressive royal engineer, you'll crack ice and stone, purchase helpful upgrades from Merlin (hey, just because the land is burnin' doesn't mean a wizard ain't gonna get paid), and play a whopping 300 levels in your quest to restore the land to its former glory. It's simple, satisfying, Fairway Solitaire-esque gameplay without all the bells and whistles. 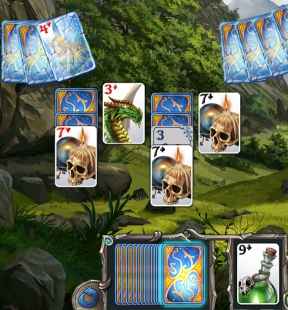 Chances are you've already played a game of solitaire before, and if not, it's pretty simple despite the way it's played here. Each card at the top of your deck has a value on it, and by clicking unobstructed cards that are either immediately higher or lower than your card in numerical order, you can remove them from the field. Sometimes cards may have special properties, like being trapped in ice or stone, that lock them in place unless you meet certain conditions like uncovering a special card, or removing certain other cards from play first. Winning grants you gold, food, and building materials you can use to rebuild the kingdom between levels, and while most structures like farms simply generate more income, some like Merlin's tower unlock helpful new upgrades for you. If you don't feel like replaying levels to grind for whatever you need, once you unlock the marketplace you can simply trade one resource type for another.

If all this sounds familiar, it's because there's really nothing about Avalon Legends Solitaire 2 we haven't seen before, even recently in games like Regency Solitaire. The story is just sort of there, occasionally popping up with a few lines of text, and on the whole it's more of an upgrade from the original game than a substantially different experience, even with the town building. The artwork has been polished and refined, and the whole game has a sleek, professional look to it that makes the whopping amount of levels fairly fly by. In spite of, or maybe even because of, the lack of significant gameplay twists, there's something very zen-like and relaxing about playing Avalon Legends Solitaire 2, and if you're looking for a card game that's easy on the eyes to keep you busy for the afternoon, it'll definitely provide. That's not to say all the levels don't start to blur together after a while, but the time you'll spend unlocking all the town buildings and trying to get a perfect three-star ranking in each level means you'll spend a lot of time with it in the long run. Avalon Legends Solitaire 2 is familiar in a relaxing, comforting way, with a remarkable amount of gameplay for your buck, and is well worth checking out for casual card game fans looking for something to while away the hours.

One of the better Solitaire games out there. It's pretty huge in length. And the difficulty doesn't come across like a bell curve. Lots of options.