Carnivals are usually merry, bright and endlessly fun yet they're also seeped in secrets and magic. Perhaps it's because the possibility of danger is so exotically dressed in the pretense of showmanship, we feel like motorists rubbernecking at the scene of a crash who are invited to pull over and take a closer look. Maybe we fantasize what it would be like to be part of the act, yet we never expect to get sucked into the hidden world behind the playful facade. Yet that's exactly what happened to Susan when she visited Dark Arcana: The Carnival, a visually striking and thrilling hidden object adventure from Artifex Mundi. 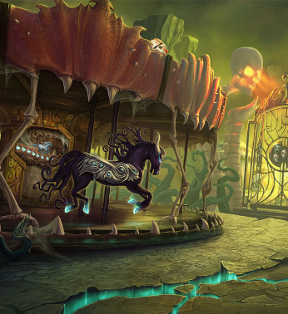 You arrive on scene to investigate the disappearance of Susan, who was last seen inside the carnival's house of mirrors. You're given a photo of the missing woman and nothing more to begin with, your only lead being the strange behavior of the show's owner and starring act, Jim Gibbons, a knife thrower with a tragic past. Seeking more information and resolved to uncloak the mystery, you follow Jim, solving fanciful puzzles and searching through imaginative environments as he attempts to hinder your progress. He's a man on a desperate quest, to right a wrong that left him wretched and guilt ridden, but is he also terribly deceived?

Now you need to explore a wide variety of imaginative settings, putting together clues and using found objects to open pathways and reveal more insight into Jim's quest. Navigation is very smooth, as the cursor changes to clearly indicate entrances to new areas and interactive zones. The neatly-composed hidden object scenes are plentiful yet spread out evenly enough to not take away from the adventure. But if you'd rather, when you encounter a search scene, you can opt to play a card game called Monaco instead. 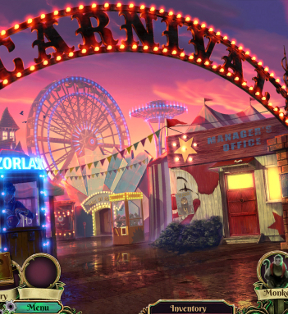 You don't have to face all this adventure by yourself, either; early on a trained monkey joins you to help get hard-to-reach items and bring a bit of cute for comic relief where needed. Other help, such as sparkles, hints and skips, are modified according to the difficulty setting you choose: casual, advanced and expert. There is a smart map to guide your travels through other dimensions yet, even without it, the tasks are linear enough to avoid confusion.

Gameplay is driven by the need to keep up with Jim, making each task feel all the more compelling and fast-paced. There are a good number of minigames that present a mild challenge, but nothing that will pull you out of moment or slow down the urgency to succeed. Because of this, the main part of the game feels a bit shorter yet, when it ends, it unlocks an extra chapter—a nice treat for a standard edition game. All the high quality features you expect from an Artifex Mundi game are also included; there are volume controls for sound effects, music and voices plus the game supports widescreen automatically (and with a true aspect ratio) which is appreciated since the superbly rendered graphics make immersion in this horror-themed fantasy world so easy. 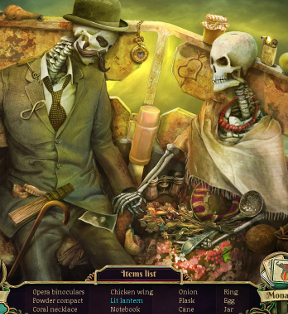 Analysis: Dark Arcana: The Carnival is a well-balanced presentation of interactive hidden object scenes and fly-by-the-seat-of-your-pants adventure all wrapped up in an extremely entertaining narrative. Venturing deeper into the story, the already fascinating carnival scenery turns dark and surreal as you enter the dark mirror world and encounter an evil presence that's longing to break free.

Although those who have grown tired of the typical lists of items to search for in the hidden object scenes will find no relief here, they are pleasant to look at and no item is unfairly disguised. That leads to what is either a disappointment or a blessing, depending on what you want from a hybrid adventure game: it rather easy all around, even on expert mode. It's disappointing if you thrive on challenge; it's a blessing because you're less likely to get stumped and held back from the fun—and Dark Arcana: The Carnival is extremely fun. There is something unique and intriguing about each scene that's never dull and the story remains interesting all the way to the climatic ending scene.

Artifex Mundi excels at making well-designed games as already proven with their previous titles such as Nightmares from the Deep: The Cursed Heart and Enigmatis: The Ghosts of Maple Creek. While Dark Arcana: The Carnival is a bit smaller in scale, that signature Artifex Mundi style shines through as big as ever. The writing never skips a beat and the principal characters are well-developed and dynamic with talented voice acting to bring them to life. The result is you're not playing a series of puzzles or search scenes that are loosely pieced together with a story; instead, you're engaged in an all out entertainment production. You came to the show expecting a thrilling spectacle, and that's exactly what you'll find in Dark Arcana: The Carnival.

They really should have had a preview of the

The carnival part wasn't that interesting to get a player to want to purchase the full game. The backgrounds and sets looked good. The characters were a bit stiff looking. I liked the feel of the game. The picture on the review of the skeletons is more intriguing than the characters that I interacted with in the game.