Mad Head Games' stunning hidden-object fantasy adventure Dark Realm: Queen of Flames begins with a village siege that would make Alduin proud, when you're awoken in the middle of the night by your father, the blacksmith, and told to take your mother's belongings and flee before the shadowy creatures outside break down the door. You have no chance but to flee the city as it burns, but there's no running from destiny, and go figure... turns out the magical boots and mysterious brooch your mother left behind hint at a pretty big destiny for you indeed. One involving the fire banshees stalking your family, and a dragon so nasty he literally busts up your user interface. You'll need to solve magical puzzles and hidden-object scenes, uncover family secrets, unlock spells and enchanted items to help you, and more if you want to save your father as well as the kingdom. With a remarkably well told story with its share of twists and memorable scenes and visuals that might just set a new standard for casual games, this is one adventure any fan should feel proud to add to their library. 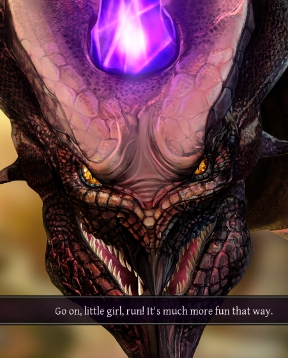 It's hard to think of a casual adventure I've enjoyed as much as Dark Realm: Queen of Flames. When you review games for a living, you never really completely turn off that little part of your brain that nitpicks everything, even when you're just playing for fun. Turns out apparently all I needed was a dragon smashing its way through my inventory, magic boots, fire feet, and total destruction of a city as an opening sequence. Queen of Flames is one of those games that just manages to hit all your buttons when you're looking for a good time. It's big at around four or more hours long for the average play, it's gorgeous with beautifully illustrated characters and environments, and it's packed with puzzles, mini-games, and cutscenes galore. Admittedly, there are times when the game might lean a bit too hard on gimmicks over actual thinky puzzles, such as repeatedly having you time clicks to hit a certain section of a circle to succeed at acts of skill throughout the game, but there's just so much going on it's hard to really mind. Backtracking exists but is happily kept to a minimum, and the game moves you to new locations often enough that it always keeps your interest.

The story here isn't breaking any new ground, and chances are if you've even breathed on a fantasy book in your life you'll figure out the plot within the first half hour, but it's all presented so well it's engaging regardless. Some dodgy accents aside, the game is extremely well acted, with cutscenes that not only add to the story but also to excitement and menace when necessary. The various magical abilities you get in the form of your amulet and booties are a nice touch and add to the overall field of the world in a very "heroine's journey" sort of way, though they're never really used beyond story sequences in a way that impacts the game or requires any thought. In that same vein, the overall difficulty here is sort of on the shallow end, though the way the hidden-object scenes are spread out and you use several items multiple times goes far to win some points. While there are times when Dark Realm: Queen of Flames feels like it could have gained some real teeth like its dragons, ultimately it never really slows down enough for it to become an issue, and as a result, it delivers a very classic fantasy themed adventure that should satisfy just about anyone looking for something well made and engrossing. Highly recommended.