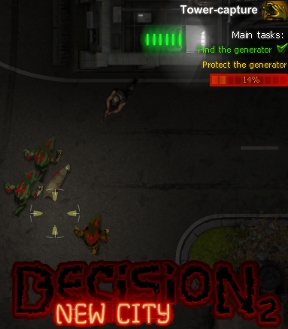 After you single-handedly wrangled the first metropolis after its zombie infestation, you might have considered kicking back with your favourite iced beverage and the entire run of Babylon 5 on DVD for a little R&R. But no. You have to show the rest of us up and do it all over again in FlyAnvil and Denis Kukushkin's action-packed shooter strategy game Decision 2: New City. Come on, dude, we're pretty sure even Bruce and Shaun would take a few days out from their last apocalypse for some downtime, but here you are, back on the road, ready to bring another city to heel with your mighty fist. Crawl your way through a dangerous city bit by bit, eliminating the monsters within each section and establishing security measures so that this tragedy never happens again. You know, until the series turns into a trilogy.

Move with the [arrows] or [WASD], and aim and shoot with the mouse, mowing down anything that comes your way... which will be quite a bit, and frequently. Each city section needs to be brought under control by taking on different missions like recon or simple extermination that lower the danger level in each place. Perform well, and you'll get a hefty cash reward that you can spend on the substantial upgrade tree for both weapons and your own unique abilities. If all this sounds a little familiar, well, that's because it is, since Decision 2 plays a bit less like a fully-fledged sequel and more of an expansion pack to the original game. It's basically the same thing, though sadly lacking most of the overdramatic but well produced cinematic elements.

"More of the same" isn't necessarily a bad thing. Decision's strength has always been in marrying the familiar, straight-forward zombie action with enough upgrades and mission elements to keep it from feeling mindless... if not necessarily from feeling a little repetitive. This time through, however, you'll encounter some new enemies, and the upgrade tree has branched out quite a bit with some new abilities to boot. The lack of a minimap is a bit frustrating in big areas, but the game does feel as if it's been tweaked a little in regards to both responsiveness and brightness, which is welcome on the ol' ocular orbs. Decision 2: New City adds enough new tidbits to its original zombie stew to make it really feel like an improvement, and fans will welcome the chance to grind some monsters into paste while making corny action-hero quips about "taking out the trash". Maybe, this time, after you've done you can take a nice, long vacation to someplace relaxing. I hear Raccoon City is nice this time of year. That place is always deadsville.

When I try to start a factory in the NE or SW zones, I start up the generator, the progress bar goes immediately to "done", and the "defend the generator" mission never completes.

@emergent, this is what happens when the zombies wreck the power plant before you start the generator. It happened to me a few times before I figured it out. You have to defend the power plant the whole time, not just after you've started it.

I played this game for a looong time the first couple days I was playing. Now, I keep coming back for more (it's addicting), but I can only stand to play for a few minutes each time. To be seconds from finishing a mission successfully, only to be suddenly mobbed and killed, to accidentally shoot into your own generator (thus failing the mission), and all the times I accidentally exploded an atm instead of hacking it are SO ANNOYING. It's irritating to have to redo the mission from the beginning every. time. A save/safe spot would save me lots of yelling and throwing things.

completed this game twice and now i understand the tricks to stay alive and shoot up the zombies.

@littlegreykitty : if you have enabled the ability 'stability' , press down space whenever you want to make the guy stay in position. You can do long range sniping (with rifle) or stand at one key spot and shoot anything that comes up at you.

While conquering tower/factory , walk around and kill EVERYTHING around , hence the capture becomes easy.

weapons you must buy immediately :
- Start with a rifle , go till Dragunov 3
- buy automatic guns until you buy Mini gun. Its a boon in heavy zombie densities
- Invest in grenades rather than rocket launchers. This allows you to shoot and throw grenades at the same time. (rocket launchers are quite slow in loading.
- Mines. Plant them around the factory / tower just before capture , to ensure uninterrupted capturing

Abilities you must invest in :

- Heal - till 3rd level. extremely essential
- Rage & Self Defence - for those moments when the monsters jump at you from sky
- Stability & Agility allows you to stay firm or move swiftly across (crucial in boss fight)

Dont worry much about unhacked ATM's , because you can make more by cleaning the city as and when you want ;)

I love this game but am having trouble with defeting bosses ... Also a map would be good too ... Like a city map when you're in the level should be an ability like the enemy dector.