Echoes of the Past:
Royal House of Stone

Hey good lookin'. Whatcha got cookin'?... what's that? You say, "A hidden-object game that isn't a well known and established series but isn't mediocre?" Echoes of the Past: Royal House of Stone is a fun first chapter in a new series that may be small in scope, but has a heart as big as a whale. Or, uh, something. 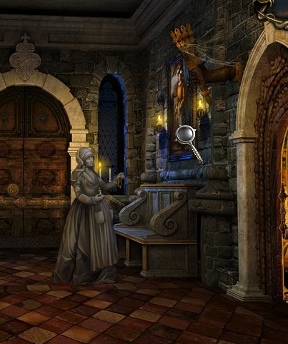 The story, which I would call "like Princess Isabella, but... " begins with you touring a museum that features an exhibit on an ancient medieval family that met with strange and unfortunate circumstances. Upon examining a portrait of the prince, who vanished on the eve of his coronation, you find yourself getting dizzy... and wake up in a darkened room... apparently hundreds of years in the past. How are you going to get home? Who was that mysterious woman? What happened to the inhabitants of the castle? And more importantly, I don't think cappuccinos were invented until after the twentieth century!! Clearly you need to unravel the mystery, post-haste.

If you're a regular visitor to this site, you're probably familiar with the controls for a hidden object game. But just in case these intricacies are new to you, let me help you with them; there are none. Intricacies, that is. You navigate by clicking your way around the screen. If the cursor changes to an arrow, clicking that area will move you to a new location. If the cursor changes to a magnifying glass, you can click on that spot for a closer look. Cursor changes to a hand? You can interact with something. And if you see sparkling on the screen, click on it to trigger a hidden object scene.

Royal House of Stone also flirts with the point-and-click genre, having you collect items you'll need to complete puzzles. Find yourself getting stumped? Don't worry, as your handy-dandy magic mirror (yes, really) is there to provide hints and clues, as long as you keep finding other mirrors in hidden object scenes. Add in the fact that you can skip most (but not all) puzzles simply by waiting around a bit and then hitting the big ol' "skip" button in the upper right corner and the game is accessible to pretty much anyone.

It doesn't hurt that Royal House of Stone is a handsome little HOG if ever their was one, either. The environments are lovely, with lots of little touches, like the spiders that scurry past you, and the strange things you'll never quite be sure you actually did see out of the corner of your eye. No slouch, either, the audio, with an atmospheric soundtrack and voice-actors who, by and large, are surprisingly inoffensive to your tender ears. I just wish the story had kept up that same level of quality. No, it's not "Ayn Rand" bad, thank goodness, but... Tragedy befalls kingdom and only one lone adventurer can lift the curse? Been there, read that, seen the Disney film adaptation. 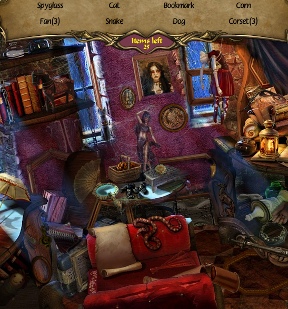 Analysis: I'd imagine that a hidden object game is pretty easy to make, since the market seems to be sopping with them these days, but it seems to be hard to make well. With the exception of the Mystery Case Files series and a few other titles, any time I usually spend with a hidden object game is time steeped in boredom and resentment, like some foul yet mediocre blend of tea. I'm not saying Royal House of Stone is revolutionary and is going to change your life. It's just a game that manages to avoid most of the pitfalls other games in the same genre fall into, such as poor object design, bad translation, pointless to-and-fro-ing, and the like.

Which, you know, helps to take some of the sting out of the unreasonable item requirements that are a staple of the point-and-click genre. At one point, for example, you need to gather some seeds. Not particularly ominous seeds, mind you. Just seeds. But you can't just pick them up and put them in your pocket, oh no. Nor can you put them in any of the items in your inventory that could be used to hold anything or simply bundle them up in a bit of rag that's lying right freaking there. You have to find a special bag to carry these seeds. Not that there appears to be anything special about it. If you've played a point-and-click game before, you're probably used to this sort of "because I said so" school of restriction, but it's still a bit ridiculous.

Thankfully, if "no, only this item will do the job" is standard, the puzzles here are not. While you've got your share of tasks that need to be solved by using the appropriate item in the appropriate, obviously marked location, that's not the only solving you'll do. A goodly portion of the game's puzzles actually require logic. One puzzle, for example, requires you to paint sections of a map representing a feuding kingdom, and to keep identical colours from sharing the same border. Another has you use a series of weights to trigger a mechanism. None of them really qualify as brain busters, or are even terribly unique, but it's still nice to have a game treat me like I'm capable of basic function beyond knowing not to try to fit my whole fist into my mouth. Thanks for always believing in me, Royal House of Stone.

But the biggest flaw? The length. Royal House of Stone feels about half as long as it really should be, and most players will probably breeze through in a matter of hours. Whether you find this a Misery-esque fatal hobbling depends largely on how much game time you demand for your buck. Royal House of Stone is high quality, entertaining, and worth a look if hidden objects are your "thing". If quality over quantity is what you're looking for, then you won't be disappointed here.

Echoes of the Past: <br />Royal House of Stone Walkthrough now available!

Echoes of the past: The Royal House of Stone, Walkthrough

Chapter 3: The Court Tailor and the Cook

(Walkthrough by Kayleigh of JIG.)

Looks cute. One big problem with these types of games is how "large" the object is - that is, I've clicked right the object in question, but it registered as a "miss" because for some reason the object doesn't fit into the "outline" or whatever decides where the object is. I find it in both mainstream and non-mainstream verions of hidden objects games. How did this one compare?

By the way - cappuccinos came into being, as far as I know, in 1901, so you were right there, and "Ayn Rand" isn't so bad if you stick with ATLAS SHRUGGED.

Hi Tabs. :) Unfortunately, Atlas Shrugged IS the only Ayn Rand book I've ever read. I'm glad to hear someone else enjoyed it, but it is so distinctly not my cuppa.

As to the object hunting, I know what you're talking about, and I can't say I had that issue here. I spend through a lot of the hidden object scenes, and while you do have to click ON an item (not just near it) of course, the game seems to be particularly good at registering where you've clicked. Give the demo a shot and see if you find it fussier than I did; I've admittedly been saturated with a lot of hidden object games lately, so there's every possibility I have a high level of tolerance.

Unlike my relationship with Miz Rand.

I bought this game and enjoyed it a lot. I like how more hidden object games are incorporating navigation. Unfortunately I think they'll keep pushing that idea till they're in full 3D mode. Then they'll require Skype and ammo. We know how these trends go. (I'm downloading The Dark Hills Of Cherai right now, using a Big Fish game credit. Sweet.)

Is there a casual game about how bad Ayn Rand is?

It was a good game, just too short. Looked pretty, objects were nicely drawn and mixed well into background. Did not have that "you miss-clicked by 1 pixel" problem either.

I only skipped 1 puzzle, the one where you had to spell out the name of the king. Somehow I did not get at all how to solve it. Pushed the letters around randomly for some time and then gave up.

Probably most annoying part was running through the castle looking for some item only to pick it up and run back all the way through the whole castle again. First even the navigation between rooms felt weird but I got used to it.

Echoes of the past: The Royal House of Stone, Walkthrough

Chapter 3: The Court Tailor and the Cook

(Walkthrough by Kayleigh of JIG.)

It reminded me of another game (I'm racking my brains but I just can't remember the name!!) where the servants and lords of the house had been trapped, not in stone, but in broken mirrors, though.

Thank you for the great clues! I was stuck at one point and was getting frustrated when I decided to search for a guide! Thanks again...very helpful. The other game about the mirrors was a really good one also!

stuck on the weights. Icannot figure it out for nothing. Any clues?

Katexaminer -
Check Chapter 2, Level 15 of the walkthrough above for the solution and a screenshot.

Stuck in the room with the enchanted princess with no way out and a smoldering fire. Only inventory item is a dustpan. Can someone help? Trixie