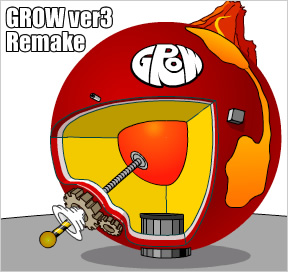 A while ago, On of Eyezmaze announced on his blog that he had lost the files for his original Grow game due to a failed hard drive (reviewed here way back in 2004). But he was able to recover some of his work from the original SWF files, and decided to do more than fix a Flash Player versioning issue with it: He added a new ending (there are now 2!) and a hint button as well. The result is Grow (ver. 3) Remake.

Simply drag the item icons, one at a time, onto the big red sphere. The objective is find the correct order that will grow each item to its maximum level (some require more time/turns than others do).

This first release for the Grow series is a little more difficult than the others that came afterward. With 12 items, that means there are 12! possible permutations (over 479 million!!). Fortunately, the game gives you clues after each attempt identifying what level each item achieved and whether it reached its "max lvl" (maximum level), and the new hint systems helps to uncover the new hidden ending.

The new 2nd ending is so radically different and so extensively animated that it provides a compelling reason to relive this awesome little game once again!

Play the original Grow (ver. 3) with the Flash Player versioning bug fixed, too.

ok anyone have any ideas

i love these games they are so cute

Awesome, I really want to find the hidden ending.

#3 ^v^
Sorry I couldn't resist.
*♥*YaY*♥*
--New Grow--
okay, kinda new Grow
On of Eyezmaze, I love you
Thank You JIG for introducing me to On and his incredible games
aNDY out

That hidden ending may be better than the original. WOW.

Love the new ending, I wonder if an additional ending will be added next time. :D

I LOVE these games! The animation is always awesome, and I can't resist using the walkthrough (I could never find the endings anyways.) For frustrated people who just want to see the animations, do the normal ending first. It sets you up for the AWESOMENESS of the secret one.

I love these grow games, but I almost always cheat.

I actually managed to figure the normal ending out of my own, only got 2 hints (really valuable despite being as odd as the 4th and 7th item). I then figured hey, I wanna see this secret ending. I went to the walkthrough, then checked back on the game and... Only the first 2 hints were missing for the secret ending! I wouldn't even have needed the walkthrough!

No shame in cheating. Half the fun is watching how the objects interact, and what kind of fun contraption they finally make. And the music. :3

I love the bonus endings that give your final score for each item as something non-numeric, like "Lv. Fire" for this one, or the hilarious (and mildly disturbing) "Lv. UFO". Were there any others? I can't remember...

Andy's comment is remarkably like what I wanted to say. Perhaps that's not so surprising.
I'll always be grateful to Jay for introducing me to On's games (and Hapland; remember those?).
On still represents the pinnacle of flash art, as far as I'm concerned (although Daniel Benmergui, and a few others, is giving him a run for his money). I'll always feel like I have kindred spirits here, considering Jay's reaction to On.

Sorry if I'm waxing a little sentimental here. But I have a real soft spot for the Grow series.

Your walkthrough can't tell left from right. Other than that, amazing hidden ending. I was completely on the wrong track.

Was sure the little guy living in the whirlwind had to do something! But no.

I am really surprised with how different this new ending is, and how well it works out. And especially how On has come up with such different uses for some of the objects. Well done, On!

I love the hidden ending! The world looks all fiery and everything is level fire! It says congratuflams. flams=flames.

i loved it. the secret ending was OMG.

love the grow series, but can't access this game. screenshot links open a new window (firefox 3.0.11, flashplayer 10, windows xp) that eventually times out as a page load error. text links open in a new tab that takes forever to load, but gets me to an eyemaze site, where i also cannot play the game. any ideas? maybe they're just overloaded right now...

Whenever I try the hidden ending it doesnt work

do the hidden ending backwards.

I tried it, and nothing significant happened. Was there any REASON you said to do the hidden ending backwards?

If you do the hidden ending but switch the

ladder with the ball

it won't tell you how far things have leveled up at the end...Otherwise, completely great game. The Grow series never fails to disappoint!

hopefully the next Grow game will be Grow City but with three endings:medieval, modern and futuristic.

On is a game god. What a wonderful mind. Thanks, JIG! Thanks, On!

um, mariofan8, there already IS a game SORTA like that in the grow series: grow island. medieval is the failed endings, modern the regular, and futuristic is the hidden one.

I think ON is the only person on the internet who could create a classic, pioneering game that all of the internet looks up to. And then apologize for it.

ON, I would step on broken glass barefoot if it meant another grow game.

How do you all play these? I love these gams, but I always have to cheat. I mean, out of 10 options, what are the possibly combinations? I mean, you don't have to play them all, some you can tell play off others, some max at different levels. I have to keep a notepad and write down what items max different with others then try to sort them.

That said, I had a completely different ending, only missing two, than the regular ending. So I'm at a loss.

The CONGRATU-FLAMS!! ending is definitely my favourite. I love it, all the

Volcanoes, the fire dragon swimming through the flames, everything about it.

I love the Grow games. Every time there's a new one, I rush to try it, then rush to find a walkthrough for it, then fall hopelessly in love with the cute graphics.

oh. my. god. i just love these grow games. i would kill myself for another grow game, ON. i have played these games again and again in the last few days, just for the animations, music and endings. ON, I LOVE YOUR GAMES!!!
Xi: you said its disappointing on accident. LMAO

jay: i love your site.

Is there some sort of logic to solving these effectively?

Sometimes I place an item first and it never grows to max, but if I place it halfway through it does. Do some items cause unseen negative growth?

I swear it read Max Level but it wasn't out there long enough to have the robot guy climb down it. How am I logically supposed to figure that out!?

However, what's the point? There is no causation between actions. Dumb luck or brute force is required and neither involves brain activities.

As a piece of art, it is great; but not much as a game.

Some items are co-dependent on each other. For that one to get max ladder the robot guy MUST be fully formed so the purple robot guy will climb down.

JaumeBG: It means click on the object closest to the bottom-right corner

Yes, some items do evolve negatively, given the right (or I should say wrong) circumstances. For example:

When I was trying for the Congratu-Flams ending, I clicked on the egg after the volcanoes erupted. It fell into the lava, and nothing happened to it after that.

You can tell when something like this happens when, at the end, it says an item was at level 0. They start at level 1.

I found a 3rd ending

not to burst your bubble, but it's the same ending with different order of actions

Um. The first one is supposed to be fully maxed out and the hidden ending doesn't work. It should be like lvl. hidden or something. Alot of your other ones were right but this one is just bogus.

[Edit: Are you sure you're playing the correct version of the game? Use the links in the review above and follow the walkthrough listed here and you will get the winning solution for both endings. I just played through again to confirm this. -Jay]

Cool, great upgrade on an already brilliantly crafted idea. I have one idea, how about creating more than just two paths? Like one dealing with water as its primary path, and another dealing with space (planets, aliens, etc.). I just think that with more paths a person can choose while also not allowing it to imbalance the other choices, a game like this could become very epic.

well i just did every one of them (but i used the walkthrough) how do people find these ways, like really? I did every combo of things but never got it right once.

They should totally have another new version with water as a new alternate ending.

i think they should have a water alternate ending too JIGuest

Hey "Kratospie" um i found the secret for it lol click ? and bottom screen then if you seen a 1 there you can use the hidden clues (but if your top row isn't full wiht numbers complete normal mode to do the extra one) to win its a fire theme btw..

Hahaha I love the music. I think I keep coming back everytime just for it! I played the first Grow waaaay back when I was... 12?! (2004, if I'm correct). Then I introduced the series to my little cousins and got em hooked as well. XP

I found the normal ending, but with a different combination :

Music Changes at A, B. The pinwheel noise stops at C, At the end.

Here's a challenge to keep people busy. I challenge anyone to get the LOWEST possible score on this game. State the final score and the combination as a reply

my first time i did it was today and i didnt even have help and my score was 30000!

5,481 Views
1 Comment
chrpa— Jayisgames needs your help to continue providing quality content. Click for details Rinnogogo's latest game is about finding the red shoe, obviously, but later in the game. At the beginning you just look around for items and hints. As usual....  ...

Playing Games Can Help You Get Better at Math

1,561 Views
0 Comments
jayisgames.com— There are many different types of math games students can play to help improve their math skills. It can also reduce math anxiety and encourage a positive attitude toward studying math. A study found that students who do math...  ...

5,855 Views
5 Comments
chrpa— Jayisgames needs your help to continue providing quality content. Click for details You find yourself on a deserted island, you still have your small boat but the oar is lost somewhere - what now? Sounds familiar? Yes it's not the...  ...

3,843 Views
2 Comments
chrpa— Jayisgames needs your help to continue providing quality content. Click for details Hi! Weekday Escape and Weekday Puzzle are here! In their latest escape Amajeto went back to their old concept of one-scene games but with better graphics and...  ...