Best regarded as a gonzo match-3 RPG Puzzle Quest-alike, Ino-Co's Gunspell, also available free-to-play on iOS and Android, is a little bit bonkers in a good way. As the game opens, you play good ol' John D., a policeman in search of his sister, Alex, who he quickly discovers he doesn't know as well as he thinks. In short order, you find yourself stranded in a bizarre world full of monsters, demons, and the undead, because of course you do, and the only way to defeat them is in turn-based match-3 combat, because of course it is. Swap any two adjacent tiles on the board to make matches of three or more identical tokens. Gemstones restore mana appropriate to their colour, while green tokens restore health, purple grant experience, silver gives cash to spend, and skulls deal damage. Your goal, naturally, is to slay your enemy before they can do the same to you, and if you win, you'll be granted treasure and even valuable equipment. Of course, that's just the basics. You've got an inventory of weapons and armor with passive and other abilities, magic spells, quests, and more. The end result is a goofy and enjoyable match-3 hybrid with a great aesthetic and simple yet addictive gameplay, but frustrating remnants from its free-to-play roots and some rough edges make the desktop version feel unpolished. 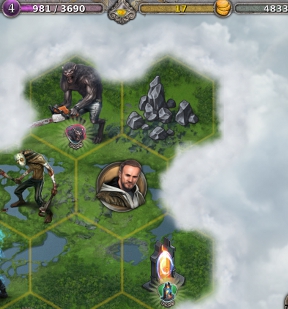 Turns out your sister Alex was a highly prized agent of The Order, a, uh, order dedicated to protecting our world, "Middle World", from the creatures of the Upper and Under. Alex hasn't been seen in over a week, so you're abruptly sworn in as a new agent of the Order to find her, as well as take on the tasks that have been mounting up in her absence. Gunspell was originally a free-to-play game (and still is on the mobile market), and it shows in how grindy it is. You have to earn cash to unlock new inventory storage slots, find better equipment, wait for an arbitrary market timer to count down to refresh the items available, and put up with the stamina system (regained by playing the meditation minigame) used to accomplish tasks. To be clear, if you buy this game as a download, you will not need to pay any addition money, though the same can't necessarily be said for the mobile versions, so caveat emptor. Though it quickly becomes a non-issue with more levels and wins under your belt, stamina is still a pain if you ever run out given how clunky and dull the meditation "game" is. As a result, Gunspell feels like a game that needed a bit of extra feedback and polish on its final desktop design and interface, which is a shame, because it's still a lot of campy, cheesy fun. 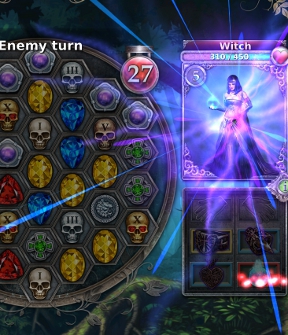 Though initially almost aggressively easy, and still rather dependent on luck for treasure and high damage, there's something addictive about its snappy gameplay and monstrous enemy design. A werewolf with a chainsaw? A kobold with an axe and a hockey mask? Sure, why not! Once you get past your first few tutorial missions, you'll need to put more thought into your equipment and spells, as well as how you manipulate the battle board. Equipment needs to be repaired, but it can also be upgraded, and since spells are single-use, you need to strategize what you take with you, and when you use it. It's simple, but it can still be challenging, and for players looking for something casual, it's a nice addition to the genre. Thankfully, once you get some levels in, stamina is rarely much of an issue given how much the game piles it on, and you can slay to your heart's content, traveling around the map and uncovering more baddies and secrets. Not everyone will be able to get past its over-the-top tone and the awkwardness of its desktop port, and there are still some things that feel like they need to be worked on, but taken with a grain of salt, Gunspell is still enjoyable. It's bumpy in a way not everyone will be willing to tolerate, but it manages to endear nonetheless.