The continuing horrors from the casual adventure developer ERS Game Studios have returned, and this time it's more horrorey than ever. Haunted Halls: Revenge of Doctor Blackmore is the third game in the Haunted Halls series, picking up where the previous games left off and not stopping to let you gather your wits. It's a psychologically intense game for a point and click puzzle adventure, but it's carried out with the usual grace and flair we've come to expect from ERS. Ready to descend into madness again? 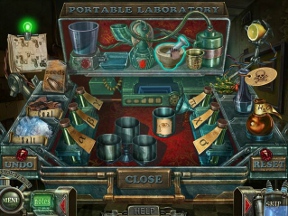 The Doc is back, along with his slimy tentacle and mechanical tentacle legs, and as you probably guessed, he's still up to no good. This time around, you wake up in his laboratory and are turned loose to wander about in its halls. Oh the sights you'll see while here, including a kangaroo reading a newspaper, a pirate mask that smokes cigars, and the giant tentacles creeping out of the floor. Once you realize you've gone mad, the doctor appears and mentions the little fact that he's kidnapped some rather important people (including your fiancé) and stashed them throughout time and space. You've got to get them back, of course, and you'll do so by solving some of the weirdest puzzles in any casual adventure game.

The set-up is very much like an adventure game, with a series of rooms to explore each stocked with puzzles and riddles and items. Gather everything you can, examine everything you can, check out the pheasant that lays an egg half the size of its own body, then figure out what to do next! Most obstacles can be cleared by using a few inventory items, and the hint system does a great job of pointing you in the right direction if you get stuck. 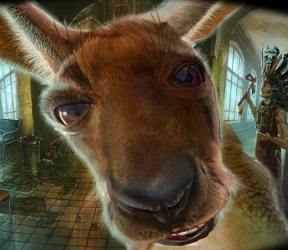 Analysis: At this point in ERS Game Studio's existence, we can almost say "ERS made this, you know you'll like it". And it's true, of course, if you don't mind a samey sort of formula carried between the studio's various franchises. But even if you're an ERS junkie, Haunted Halls: Revenge of Doctor Blackmore will still hook you. The puzzles are logical in an unhinged sort of way, almost making a parody of the genre as they play out. An ostrich egg that hatches and grows to adulthood right before your eyes? Sure, why not?!

The pacing of Haunted Halls 3 is superb, and even when you repeat a puzzle you never feel like it was done to pad out the length. Hidden object scenes really don't exist in the game, replaced by the far more interesting mini-puzzles that function like a tiny, self-contained casual adventure of their own. Along with that you'll also make use of a portable laboratory that will come into play for certain key items. It's almost like a little alchemy shop, complete with instructions and the resounding feeling of success you get when you make a potion that does something cool!

Another great release in a great series created by a proven casual adventure development studio. If you're ready for some truly "what the heck?!" mini-games and situations served alongside a smart series of puzzles, you've come to the right place!