Death. It will happen to all of us. Sooner or later. The protagonist of In Between, a physics puzzle game from gentlymad and Head Up Games, has just found out that, for him, it will be sooner. And all that is left is to ask, why? Why him? Why now? And why, if it was just going to end, was he even here in the first place? Was everything that happened just for... nothing? Taking place in the realm of the mind, the laws of physics are a little in flux, and you'll be twisting gravity to get to the end of each of the 60 levels. Use the [WASD] keys to move left, right, up or down, depending on the way the world is falling. See, you're not much of a jumper. But using the [arrow] keys, you can point yourself into direction you want to fall. You must be on solid ground to change gravity, and watch out for those spikes, though! Make it to the door, hit [spacebar], and you're on to the next thought. Later levels will feature new elements like consuming darkness that needs to be faced to avoid, moving orbs that will consume you with rage and so on Also, be on the lookout for the random memories floating through the cracks: some are a little harder to get to, catch them and they'll paint a more complete picture of the past. 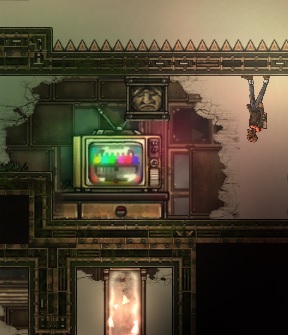 Ever since Braid came out and did a hall-of-fame job with the whole "mechanics of a puzzle game also serving as metaphor for the protagonist's mental state", we've seen either a renaissance or a glut of them, depending on your preferences. Certainly games like Fractured justify themselves, but one doesn't have to go far to find the kind of works that Pretentious Game so gleefully pokes fun at. (At the very least, we must admit we've probably done just about all we can do with the whole "Repeated princess rescuing as metaphor for unhealthy idealized obsession" twist.) That having been said, In Between is an inspired take on the concept. It helps that the game lays a good number (but not all) of its cards out on the table: it makes no bones about it being a game that deals with mortality and its acceptance (even the most oblivious will notice that each of the "worlds" that introduce a new element are titled Denial, Anger, Bargaining and so forth). But In Between's grimness is balanced by its stellar paper-doll-like aesthetic and doses of dark humor. 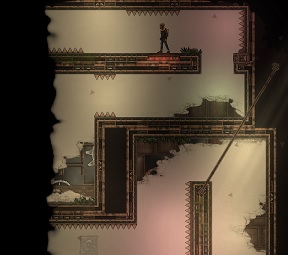 The puzzle platforming itself is also quite well done. Certainly gravity manipulation as a central mechanic has been done before and quite well (like, for instance VVVVV or And Yet It Moves), and In Between requires a lot of precision in its platforming, it is at least very fair about it, and the "shattering" death animation is very cool.. (One does wishes that they would allow even the option to switch right and left hands... There was definitely a lot of flipping when I wanted to move and vice versa). Death is a pretty big piece of broccoli to chew, but In Between is the better for confronting it as only interactive art can, instead of hiding it in brownie batter twee-ness. In Between is well-crafted, yes, but its sense of honesty is what will keep you making progress in the crazy thing we call life.