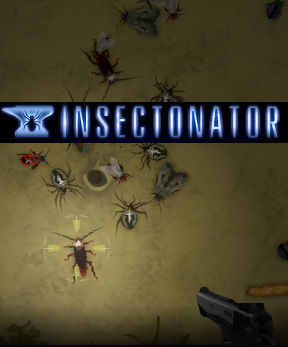 Bugs and I have an uneasy friendship. On the one hand I can appreciate the beauty of creation in their skeletons, the elegance of their societies, and the important role they play in our ecosystem. On the other hand, should one drop down the back of my shirt or start burrowing in to the Reese's Puffs, talks are going to break down pretty quickly. It is to the latter part of my psyche that Insectonator, the new topdown shooter from Denis Kukushkin and family, John and Alex, is aimed. It might not be too nice to all things great and small, but if you have a hankerin' for some arthropod blastin', it'll be sure to catch you in its web.

Using the mouse, you take aim and squish various varieties of spiders, roaches, mantis and other crawlies, starting with chucking rocks, then moving on to knives, fire-arms and others. You may also use the [arrow] keys for more pinpoint accuracy. Weapons can be switched with a a click of the mouse, the [Z], [X] and [C] keys, or by setting the options to switch randomly after a clip has been unloaded. Bonus points are awarded for quick kills, head-shots, and consistent accuracy. Between each round There are three basic types of selectable gameplay rounds: ones where you must clear the area of all the insects, ones where you have to shoot a certain amount of specific varieties, and ones where you must shoot certain bugs in a certain order. Over time, various conditions will be met and new and crazier weapons will be unlocked. 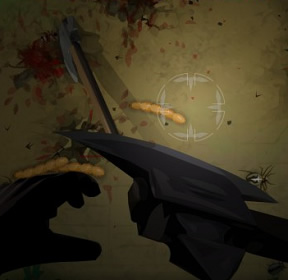 Analysis: Insectonator is seriously creepy, and I mean that as a compliment. Anyone with the slightest hint of entomophobia should stay far away, but the game is so atmospheric that it almost borders on parody: it seems that you should be blasting zombies or demons rather than termites. The game's tone is over-the-top and it totally works. Complementing this tone is the game's comprehensiveness: I counted at least 20 different bug types crawling around, and the menu promises 26 different weapons to use against them, and each combination thereof is gorgeously and gorily animated. After each round, the playing field will be a mess, and it's fun as heck to make it like that.

The biggest drawback to Insectonator is its sense of aimlessness. It's a game about killing bugs and nothing more. Certainly there are achievements to earn and a completeness percentage to fill up, but no larger goal at play. This is fine... this is more than fine, and it's quite good at relieving the stress. However it does meant your enjoyment of the game will be entirely proportional to how intrigued you are in finding out what it looks like when you use napalm or a nuclear bomb on scurrying critters. Certainly most of them do seem to contain more guts than their size would imply. Undoubtedly the shade of sadism inherent in the premise will, quite justifiably, turn some away. On the other hand... they're just bugs, fictional ones, and they make a quite satisfying noise when they are squooshed.

Overall, Insectonator reminds me of a shooting game you'd find at the kind of arcade where you trade tickets for prizes: Something whose graphics and sounds beckon you in, that doesn't have much overall depth in its mechanics, but will happily keep you entertained token after spent token. After a couple of minutes play, even your ant mite bee able to spy-der amazing charms of Insectonator, and mayfly to it over and over again to slug out another cathartic session. Playing it is an absolute moth, as its shooting action is hard to beetle, and it's likely to worm it's way into your heart, grasshopper. Now, if you excuse me, I need to pick up my check from the International Insect Pun Committee.

Warning: The game does not seem to autosave, so close the window at your peril.
Insectornator Acheivment Guide

It's a virtual pulling-the-wings-off-of-flies simulator!

If you can get past the gratuitous animal torture, it's a pretty polished game.

Seems I cannot get all achievements now, because I never got my Heckler & Koch after playing the game for four minutes. The game kept saying "Upon level completion" for the achievement despite my completing many levels.

by dropping a nuke...

and igniting it with...

the "Upon level completion" text disappeared, but, alas, no new gun. :-(

The completionist in me is disappointed.

I'm terrified of insects, but found this game very satisfying. I think it's amusing that you can get headshots on bugs.

The graphics and sound effects were a little disturbing at first, but it was easy to get over.

I finally got all achievements, at level 21.

Am I the only one getting paranoid and looking around in RL for bugs while playing?

Got all the achieves, but only 96% complete. What's needed for 100%? Perfect aim? Headshot with everything?

Some other things:
Using a rock (or boot) to set off a nuke is oddly satisfying. Getting a headshot with a nuke is just silly. Wished it offered more backgrounds (like kitchen tile) and a mode that turned off the "darkness". Remember you can use Esc to quit the round, but I think your "score" doesn't get counted.

Played it, loved it. This game is all about casual fun, no brains attached :) It reminds me of a bubble shooter game, only instead of bursting bubbles you get to blow insects with cool weapons :)

In 100% agreement with Vinny Jones.
I'm not ordinarily a fan of shmup games, but I love playing this one. I reckon the dev got the whole creepy-crawling sound effects down pat, and it just made me want to keep shooting the guts out of those bugs...

Total arachnophobe here, so I actually let out an evil laugh when I got to a level where you were supposed to shoot two different kinds of spiders.

Only problem was, I got all the spiders on the screen, and no more ever showed up (I'd only bagged half the "quota", so was a long way from finishing the level). Waited a few minutes -- alt-tabbed to another window and waited a few more minutes...then just shrugged and gave up.

Ok, I officialy hate Food Lion. I was playing and this screen-filling ad WITH NO CLOSE BUTTON popped up about Food Lion! I hope there's an autosave feature.

I've got the same issue as JIGuest...all guns unlocked, all achievements done, only at 96% completion

Only problem was, I got all the spiders on the screen, and no more ever showed up

Just shoot other kinds of bugs and new ones will show up.

Warning: The game does not seem to autosave, so close the window at your peril.
Insectornator Acheivment Guide

I'm flabbergasted at how entertaining this game I found... Perfect time killer, 5 mushrooms at least :D

Mmmm... Deliciously mean little game... ]:-)
In real life, I was raised christian, so I'm trying to be budist about bugs - they're living things and they came long befor us to this little piece of space-dust popularly called Earth. I have hard time killing even those small fruit flys which stupidly constantly fly into my juice glass, and also, why kill spiders?! They're fascinating helpfull creatures!
Ofcourse, all of this doesn't aply for mosquitoes (spiders eat mosquitos!), playing this game I imagined all the bugs to be mosquitos so I had tons of fun.

Hmmm... Didn't get the weapon I was supposed to get for playing 4 minutes (Koch ... strange, since I killed more than 3 hours playing with it...

The achievment-icon of course says I completed it, still I didn't have the gun.

That, of course means, I cannot complete the game with 100%, because the last-but-one achievment is for killing with all 26 guns - which I cannot do, of course...

I encountered several other bugs - for example I wasn't able to shoot woth the grenade-launcher type weapons after I paused the game...

So, the 5-mushroom rating was a bit of a stretch on my part - but still, I hugely enjoyed the game, so no regrets :)

Shock the nuke with lightning
KABOOM!

Get achievments until you get all weapons and on the last level, when you need to use lightening, throw a nuke and set it off with lightening. You'll die and win with 100%

A game about squishing bugs in creative (and unconventional) ways? Count me in!
Quick question: is the red content warning just because of all the blood/guts?

I agree with Seraku. I got all completions, except using all weapons because I didn't get Heckler & Koch, which is supposed to be the reward for playing 4 minutes. Well it has been well over 4 minutes and I have completed everything but (97%).

Yes, the o-rating is for the blood and guts... insect blood as it may be. Though personally I don't think the mere appearance of blood makes something more or less violent, there are definitely some who do. Therefore, the JiG policy is to tag games with blood-appearances with at least an orange rating.

In any case, in my opinion, it's clear that the developers included the blood and guts not from any sense of biological accuracy, but to make the game more evocative and creepy. There's nothing wrong with that, but by our standards, that's worthy of a "hey, this might not be for kids".

I found out how to get 100% if you place a nuke then use the backward arrow on the screen to switch to lightning and set the nuke of with that it goes to 100%.

it's so awesome to kill yourself

by using lightning on the nuke

and the most powerful attack is just

using a rock on a dropped nuke

how do you start a new game?

the railgun achievement doesnt work with a bazooka or grenade, you gotta use a rifle or pistol to get it. to win, drop a nuke, then strike it with lightning

FYI to all, best weapon to get Railshot Achievement is Brauning(single shot not holding mouse button for auto)....biggest radius shot that counts for the achievement.

And I'd say best game mode to get it would be Selectioner cause the bugs congregate more often and in larger groups than Killer mode due to the fact that they wander around on Selectioner and all stay on screen vs on Killer where they go from one end of the screen to the other. Annihilator mode might work if you get the long bugs but it seemed that Secectioner mode was best.

Without the brauning though I'd say it would be pretty tough to get this achievement! (I didn't get it until I used the brauning lol)