With some impressive facial hair and an even more impressive paunch, Jay "Zeebarf" Ziebarth's Reemus doesn't look like your typical hero, and yet he's been saving his bizarro fantasy world through point-and-click adventure games for years now with the help of his sidekick Liam. See, Reemus wants to prove medieval pest extermination is just as valid a heroic path as any other... and after five years and six great games, we're inclined to agree. So you can forgive us if we're just a little bit excited to hear about the Kickstarter project for the upcoming The Ballads of Reemus 2. 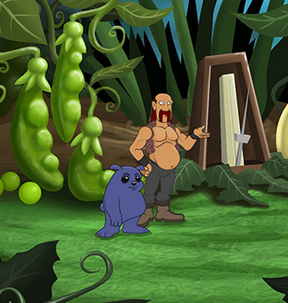 This time around, Reemus is dealing with some competition that he worries is going to put him out of business... right up until he discovers an invasion of the no-doubt cuddly "Death Slugs" that puts the kingdom in peril, forcing him to save the day. If this sounds a bit familiar to you, it's because The Ballads of Reemus 2 plans to revisit the storyline from the free games (The Several Journeys of Reemus), but don't worry... it's not going to be a simple remake. You can expect, on top of the usual bells and whistles like fancy improved visuals and such, changes to the storyline, new puzzles, and more. But maybe the biggest change is that the game won't be available in Flash, but will rather be on the VISIONAIRE adventure game engine.

The Ballads of Reemus marked the exterminator's first foray into the world of premium games, and after so many years of quality free entertainment from a talented developer like Jay Ziebarth, it's great to see him continuing to improve and reach new people. A minimum donation of $15.00USD will net you a copy of the game when it releases next year, but any amount is a great way to thank Jay for so many great free games and help fund the next batch. You can learn more and play the (currently PC only) prototype over on the official Kickstarter page, or play the original free Reemus games to get acquainted.

JayisGames.com Kickstarter picks are selected based only on personal evaluation and perceived overall quality of the project. We assume no responsibility for failed projects or developer's inability to deliver. Donate with care! Contact dora AT jayisgames DOT com with KICKSTARTER in the subject line if you find a project you think we should know about!

Actually, the Kickstarter seems to be struggling a bit, and I'm worried that it won't get funded in time. It's really going to be a fantastic game, I can already tell. -crosses fingers-