Look, real talk, pal. Get captured by one sicko serial killer with an elaborate kill dungeon set-up, okay. Run straight into the arms of another? I dunno... maybe you're giving off some sort of... pheromone? Psionic is back with another freaky escape game in Killer Escape 2: The Surgery. After the events of the first game, you stumble through the corridors of the ruined building looking for help, but you might have gone from the frying pan to strapped down into the dentist's chair with rusty dental implements coming straight at your face. That's a saying my Grandma used to use, you know. Click around to gather what you can and try to unravel the twisted secret of this place, but above all else solve the puzzles and escape before you're caught for good! 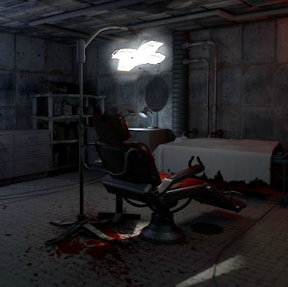 Clues hidden everywhere, jump scare, creepy backstory, thoroughly unsettling antagonist... The Surgery has everything you need to craft a good scary escape. A lot of the frustrating randomisation and awkward mouse puzzles are gone from the original, but at the same time, The Surgery has its own issues with a finicky text parser, small items bleeding into the background, and a relatively small amount of puzzles, few of which require any real brainwork. You can, incidentally, complete the story without finding all the little tidbits and opening the world's creepiest lock, so make sure you search every nook and cranny if you're into completion. And teeth. It's a more atmospheric experience with a focus on story... albeit one that ends with a cliffhanger. And, uh. Some therapy bills.

Thanks to Tricky for the walkthrough!

Thanks to Tricky for the walkthrough!

Odd...did anyone else find that it wasn't necessary to complete most of the steps in the walkthroughs to escape?

I didn't need to disable the video cameras, or complete the "tooth puzzle" to open the final door, which was open from the moment I entered the living quarters (though the mouseover tip said it was locked).

At first I thought that there might be a "better" ending than the one I reached in this manner, but I got the same one as in the video walkthrough.

Didn't need to do the tooth puzzle, or the keypad puzzle - the door to the hallway leading to the elevator was already unlocked.

Not quite as vile as Killer Escape 1, but still not exactly a pleasant experience to play.

The scariest thing about this game was the voice acting... and not in a good way. Other than that a fairly good game but I'd prefer it if they'd spent more time designing puzzles than adding awards for doing things arbitrary to completing the game. I like the SAW meets Cabin In The Woods vibe, unoriginal but enjoyable.

Has anyone gotten all of the awards yet? If so, what questions did you ask the computer? And where are the secret notes and the sixth note?

(Don't think this deserves spoilers since the Awards menu is right there at the main menu and it tells you how to get each one.)

Nevermind on the computer thing.

Just type in "joke" twenty times and you're good. Some of 'em are even kinda funny. Alternatively, you can type in the following.

And there are a few swears that will elicit reactions as well. They are single words and begin with F, B, S, and C. All four are very severe. The policy on profanity seems pretty harsh here, so that's as much as you're getting out of me.

Thank you for respecting our profanity restrictions, Wolfgang, that was very thoughtful. :) We appreciate the discretion so those people who might not like swearing, or the children who also frequent the site, can avoid running across it. While I personally have nothing against it in every day life, we leave content like that to the games and the ratings so people can decide what they want to expose themselves to.

Easter egg in the computer: