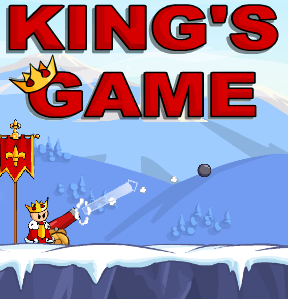 Thanks to the huge success of games like Angry Birds and Crush the Castle, the physics projectile genre is one of the hottest in casual gaming. Smokoko's King's Game puts a twist on the familiar catapult destruction... because your targets can fire back on your castle!

Controls are fairly standard for this game style; press and hold the left mouse button, drag for power and angle, and release to fire. When using ammunition such as buckshot, or a bomb, a second click of the left mouse button will activate its' deadly properties. To zoom in and out of the battleground, use the mouse wheel. 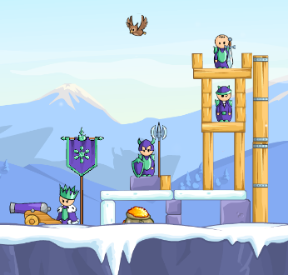 Obviously, it is always your most desirable option to decimate your opponent as quickly as possible, but in this game, it can become a necessary strategy. The AI is a fairly accurate shot, and doesn't miss that often, even on the beginning levels. Your goal will not only be to destroy your enemy's structures before they demolish yours, but you also want to aim to collect items (e.g. cheese or bread), when available, in order to finish different collections. When they are completed, you will earn extra powerups that range from score bonuses to ammunition upgrades.

The pre-level animated comics, and the characters in the game, are seemingly reminiscent of Fisher-Price's "Little People" that you may remember from your early childhood. The sound design is equally successful, from the crunch of the projectiles crushing the wood, to the high-pitched celebrations and taunts that your little king and his subjects will evoke upon each victory. King's Game is not only a great departure from a standard building destruction game, but also a wonderful reminder that virtually breaking stuff is a lot of fun!

The ai shooting back is disconnected from what you do, so it doesn't add anything to the game except a delay before you get to shoot again.

There is a connection, but it's more of a turn based timer; if you don't kill all of his people in the first shot, he's got a chance of killing all of your with his first shot. The more shots you let him take, the less chance you have of getting enough shots off to take out his people.

What terrific sound this game has. The cheerful cries of affirmation from my soldiers is very uplifting.

The game has potential, but birds are really annoying to randomly hit.
I was finding this fun until I repeatedly killed the princess and have to wait for the game to be aware of it to display the score/menu, I was reminded of Evony when you succeed, are you trying to attract perverts?

The turn based timer is annoying when you're using a fireball, I'd like to see the effects of its damage but I can't. I tried zooming out with the mousewheel, but it just scrolls the page, not the game. Clunky mechanics and less than perfect controls, I think I'm gonna walk on this one.

Also, not to be a PC wimp, but having trolls or ogres as the enemy is maybe a little more appealing than other people who look just like you (thinking of kids playing this game here).

Playing on a Win XP maching in Firefox.