How much keep would Kram Keep cram if Kram Keep could cram keep? As it turns out, it can, and the answer is "an awful lot." Ryan Ledohowski, also known as metaknight3000, began work on this platform game for Ludum Dare 31 so this entire Metroidvania adventure is squeezed and smushed into single screen! Emphasis on the "Vania" portion of that portmanteau, as this exploratory, power-uppy quest draws a lot of inspiration from the classic Castlevania series. Jump into the shoes of a blue-haired vampire hunter, and rid this labyrinthine citadel of the bloodsucking menace who lives on the top floor! You'll start off with a single, basic jump on the [X] key, and the ability to throw knives with [C]. But since this is a Metroidvania, as you make your way into the depths of the keep, you'll soon discover new skills that will help you explore deeper and fight more dangerously. Oh, and you can change the controls too, if [X] and [C] don't suit your fancy. Don't be caught off-guard by this adorably teeny-weeny castle... It's only too happy to claim its next victim! 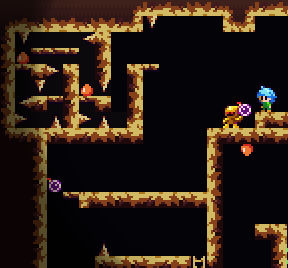 The combination of single-screen and Metroidvania is actually quite liberating in many ways. Since the entire game world is visible to you at all times, figuring out where to take your new abilities, and scoping out the best places to explore, are much easier and require far less backtracking and aimless wandering than usual. Skills and power-ups are clearly visible, meaning no rummaging through the game world to find that last heart expansion or skill you need to beat the game. Of course, the tiny size of your character and enemies means that following the action can be strenuous on the eyes, if you don't keep the game zoomed in with [shift]. But whether you play it all on one screen, or zoomed in for a more classic experience, Kram Keep is still a mighty fine little Metroidvania. There are only two powers you absolutely need to find to advance, with the third being a bonus, but each one opens up huge new portions of the castle for you to explore. There's precisely four enemy types, but they're positioned throughout the castle in ways that force you to consider every move you make. Although some are in inopportune places, there's always a way around them, or to defeat them without taking damage. The jumping puzzles require tight reflexes, spatial awareness, and the occasional thinking-outside-the-box, but the controls are responsive. There is an unfortunate lack of checkpoints, leading to some platforming repetition during difficult segments. Thankfully, dying never undoes important progress, like getting new skills. Kram Keep is a challenging and satisfying adventure that goes to show just how much you can accomplish, even in a limited space.

Impossible to kill the boss. Maybe I have to collect more hearts. Have 7.

Fun game, but I'm stuck pretty early on.
I have collected

Now I can't get anywhere else and it's driving me crazy. Any help?

You need to get the 3 Power-Ups (floating discs). 1 for wall jump, 1 for double jump and 1 for triple shooting. Without double jump you can't access some areas. Go to yellow area at the bottom, starting from right side.

Every time you touch a cross you recover your life. So if you're gonna try some hard way, better you refill your life.

The only heart I didn't get is the bottom right one.

@gsm.grafica: I can't get to any of the basement areas except the "rooms" just to the right and just to the left of the first ladder (the one with a cross at the bottom). What am I missing?

From the start, if you go up you see a green worm walking around a spiky platform. Go to the platform above to the left and jumping at the walls you can access the platform on top where you can see a yellow creature throwing bombs. kill him and touch the green gem he's guardin to open a gate.

I've done that, and gone through the gate, collected the heart that's basically just below what I assume is the end boss. To the right of there are a bunch of tight horizontal platforms, but I can't figure out a way to get through those. Is there one?

Never mind figured it out... thanks :)

That's it! Go through those horizontal platforms to gain access to the bottom part.

CanNOT get past the tight yellow platforms, I made it to the yellow part with the bomb guy RIGHT need to the ladder and cannot progress. Help HELP help help HELP!!!!

I can definitely see how the boss is possible, but I can't defeat it.

Here's something that I didn't figure out for a while, might help a few of you, especially with the tight yellow platforms BCS is having issues with:

Spikes only hurt if you touch them head on. You can walk right through them from the side. Which honestly makes way more sense than most games where touching spikes from any angle, including between them, damages you.

If you want a hint but not a flat out mechanic spoiler:
Spikes make sense in this game.

Just complete the game on Death mode, and you wont need the hearts ;)

If you go into any of the sub-menus (like setting the controls), the 'Back' option doesn't respond. You have to reload the page to get back to the main menu.

Losing all your hearts has no effect. While this technically means you could go through the game invulnerable, it also means you don't respawn if you fall off the bottom.

I tried this in IE and saw neither of these issues.

I didn't have either of those problems, HeroForge, and I use Chrome. Dunno why you're having trouble!

I managed to beat the boss - which was some sort of a miracle, as killing it took about 3 times as long as I lasted on my previous attempts.

Make sure you get all the hearts before fighting the boss - this is not one of those games that lets you go back and get them without starting over.

If you don't manage to escape the first time, after the credits just go to "Start Game" and hit "Continue" and you'll start at the countdown. It's really annoying that you have to wait through the credits each time you don't make it, but holding down enter makes them go faster.

All in all, I give it a thumbs up for graphics and style, but a thumbs down for control issues being responsible for more of my little hero's deaths than I was. And that's saying something. :P

Hopefully it was an isolated issue and other people aren't having as many problems as I did.

WAY too annoying and finicky to play for any longer than about 5 mins. If we open something, show us where.

I was wandering around for ages before I saw the door I'd opened. Controls, terrible.

Walljump, REALLY annoying. If I can't go somewhere with my current skills, just blank those areas out. I don't need to be tempted AND confused by places I can't reach.

Tell me STRAIGHT AWAY that touching a cross not only sets a respawn point, it also refills my health.

I reached a point between 2 bomber guys where I either could MAKE the jump or I couldn't work out where the hell to move to allow me to get any further.

WAY too frustrating, badly thought out, stinks of not being playtested. Don't get me wrong, it COULD be an excellent game if it were better implimented.

No offense, but you come across as if you've never played a good platform game before. This game is very well thought out for what it's trying to be...which is a challenging platform game that is all on one screen. If there is any critique for the game, albeit minor, it's that the boss is too difficult relative to the hardest parts of game play. Other than that, it's pretty damn excellent.

Okay game overall, but a bit heavy on the button mashing with the final boss, and the controls were pretty annoying, especially wall jumping and ladders. 3/5

Somehow, I misread the game's title in the image as warm beer. I was wondering what kind of game is warm beer.