Do you enjoy the works of Jane Austen? Hmm, perhaps I should clarify. Do you enjoy the works of Jane Austen in their original form, without zombies and sea monsters? If you require your romantic heroine to do battle with supernatural forces, I'm afraid this isn't the game for you. For all other Austen fans, especially those who have wished they could simulate their own Austen-style romantic adventure, Matches & Matrimony: A Pride And Prejudice Tale from Reflexive gives you the chance. Pursue nine different endings in this clever visual novel. Will you throw caution to the wind for the passionate Colonel Brandon? Succumb to the temptation of the nefarious Mr. Wickleby? Manage to capture the heart of the elusive Mr. Darcy? Or will you end up alone? These and other results will all come from the choices you make. 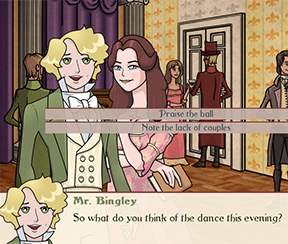 The game leans to the "novel" end of the "visual novel" scale, so if you're not keen on doing a lot of reading, skip this one. Basically, you control the main character of an amalgamation of three classic Jane Austen works: Pride and Prejudice, Sense and Sensibility, and Persuasion, with a few original storylines. You get to choose her name, so insert your own if you like or indulge your more childish impulses; for my part, I think Jayisgamesetta is a beautiful name. Read, clicking ahead with the mouse, until you get a part where you must make a choice, such as to accept an invitation to dance or not. At the end of every episode, you'll also have to decide how you're going to spend the weekdays. For example, going visiting will make you kinder and increase your sense of propriety, whereas studying the arts will increase your talent and your sensibility (in the Austen meaning of "passionate"). Some choices will also use up your energy, so it's important to spend some time resting. No one likes a girl who yawns during dancing or conversation! You'll want to save frequently via the menu button in the upper right. While the game automatically saves at the end of every chapter, you may want to go back farther than one chapter, or save at the middle of a chapter.

After you complete any ending, you'll have the opportunity to get some hints about how to achieve various endings. When you start again, you can hit "skip" or hold the [ctrl] key to skip over text you've already read. Don't worry about missing things, because the game will stop whenever you hit new text or a choice. If, despite the advice, you still can't get the ending you desire, you can get a boost by choosing to start the game at chapter ten with stats and past choices suitable to your target. 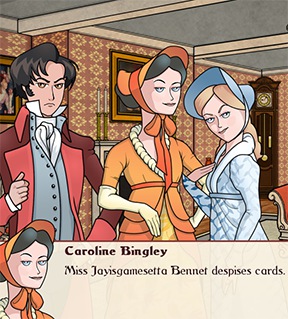 Analysis: Something you should know about me: I am a literary purist, aka a snob. When I saw that Mr. Bennet was dressed in a 18th century powdered wig, I snickered. When the game mentioned "Victorian times", I chortled. When the main character gave her opinion of the works of Oscar Wilde, I rolled my eyes. I was fully prepared to hate this game.

Yet while the makers of the game may have slept through their literary history classes, they were paying close attention in their creative writing ones. The game is wise enough to know that if it is at all possible, the words of Jane Austen herself should be used verbatim. Yet they not only managed to provide seamless transitions between quotes, but displayed great talent in coming up with new content. This shines brightest in the path towards the Mr. Bingley ending. As I said, I'm a purist; the very idea of an Elizabeth Bennet analogue marrying Mr. Bingley instead of her sister Jane was repulsive. Yet the story completely won me over. I won't spoil it, as it is basically an original creation.

It also took a deft hand to combine roles from various novels and end up with a believable character rather than a stilted literary chimera. The best example is the game's Mr. Wickleby, who as his name suggests is a combination of the two great cads of Austen's works, Mr. Wickham and Mr. Willoughby. A few times, the role combining falters, but it's generally hard to imagine how they could have avoided the problem. For example, your player character starts out most like the young heroine of Pride and Prejudice, but can choose to follow the older and wiser heroine's storyline from Persuasion. This unfortunately means that if you choose the latter, your heroine has apparently already lost her looks at the age of twenty. Harsh, game. Harsh. 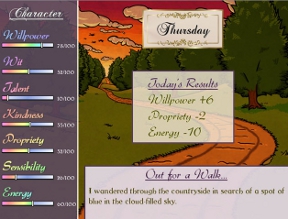 The game provides a healthy challenge. Most of the endings took me a few tries, except for the ending with the odious Mr. Collins, which is unavoidable unless you raise a certain stat in time, as I discovered to my horror. It manages to be difficult without being unfair or illogical. In retrospect the path your character takes makes perfect sense based on what you chose. Yes, sometimes a challenge is suddenly thrown in your path requiring a stat that you haven't been improving and weren't expecting to need, but that's quite realistic, isn't it? At least in this game, you can rewind back and try again, provided you've been diligently making manual saves at critical points. (You have been doing that, right?)

Making the right choices is a lot easier if you're familiar with the source material. Getting Mr. Darcy in particular requires doing a number of things which are counterintuitive at first but make sense in the context of things that wouldn't be revealed until later in the story. That said, the game does not assume you've read Austen, so if you read the text carefully, you should find all you need to know. When all else fails, trial and error is your best bet. Look especially for cues from the main character, who will say things like "I would have done better in that situation if I hadn't neglected to improve my talent" or "Perhaps by choosing not to go into town, I missed out on some opportunity".

Unashamedly romantic and respectful but not slavish to its source material, Matches & Matrimony provides many hours of replay value for the Austen fan or anyone who is looking for a dating sim that is also a window to a gentler, more restrained time. Even if it's not certain if that time is 1750, 1810, or 1890.

Demo is too short.